16th edition of the DokuFest to be held in Drugstore

As the 16th edition of DokuFest International Documentary and Short Film Festival is getting closer, Drugstore’s crew opted for holding a special night in honor of their Kosovar cultural allies and friends. The main point? Reminding its audience of the astounding clout that cinema has in shaping Balkans’ youth and future, hopefully for the best.

When I first drafted this article, jotting down a few ideas on a scrap of paper while erratically passing over my notes on 2017 DokuFest edition, I suddenly noticed how a very unpleasant feeling of concern had taken over my mind, instead of letting me work at peace. I was in fact wondering how, as a young Westerner freshly airdropped in Belgrade, would I be able to tuck into a hundreds-word press piece the incredible variety of topics tackled by the Kosovars, while not reducing their decisive political and social implications to a bunch of abstract, insignificant platitudes – for they are definitely worth more than that, and should be depicted as so. In fact, I even came to believe that this ground-breaking cultural event should not only inspire the Balkans, but also teach the West a few lessons.

You guys read me right; you have everything to be proud of. And this is even funnier for me to admit considering that, had you asked me to share my thoughts on the Balkans two or three years ago, I would certainly have brought up the same worn-out cliché usually convoked by my ignorant fellow citizens. As always when the media has turned to pristine silence, in the West the Balkans’ image has been left to be shaped by a ludicrously flawed collective memory. Had we listened back then to the doxa, Belgrade would have been depicted as a burning fortress standing alone among the leftovers of the Balkan wars. Serbia, a meeting point for aging Marlon Brando-like godfathers, corporate fat cats and politician thieves, plotting altogether to keep the country under a conservative leaden weight. Serbia’s youth, nothing more than an army of hopeless dizelazi, caught into a downward spiral of self-destructive idleness – unaware that outside their country’s borders, the world had kept on spinning. And that’s exactly when DokuFest and Drugstore should take centre stage – to prove them wrong.

DokuFest started off in 2002 in the town of Prizren, Kosovo. Despite countless obstacles, starting with lack of infrastructures, support and subsidies from their government, they quickly shaped up to become a key player for social activism in the Balkans, tackling all urgent issues – from the imperative of an ecological transition to the acceptance of LGTBQs – through movie screenings, workshops and conferences lead by international experts. Leaving no stone unturned and no sensitive truth untold, they pledged to restlessly encourage the Balkans youth to club together despite their troubled common past and to put their buoyant creativity at service of forward thinking to solve the region’s ongoing issues. Screening dozens of local productions as well as internationally-renowned documentaries, DokuFest achieves providing both a window onto the world for Kosovo to look through and a mirror for the world to acknowledge Balkans’ rising talents. And, what struck me the most was the wonderful ability of DokuFest to disseminate a sense of responsibility and voluntarism amongst younger generations; this inspiring idea that through arts and thoughtful reflexion, they could and should free themselves from tradition-bound, inward-looking ideologies – while the whole world is watching. Having despondently observed young Westerners trapped into a bubble of mindless individualism for years now, always growing warier of change beyond that affecting their own backyards, I hereby ask you not to repeat our mistake. Don’t let that go-getter feeling of yours die out. Instead, please use it for the best.

On June 22nd, Drugstore and DokuFest will bring back to Belgrade a piece of this revolutionary mindset that made the festival’s worldwide success. During this unique evening for the capital, all visitors will be invited to watch Canadian filmmaker Peter Mettler’s documentary The End of Time (2013) and to enjoy a music programme composed, once again, for art and mind’s sake. 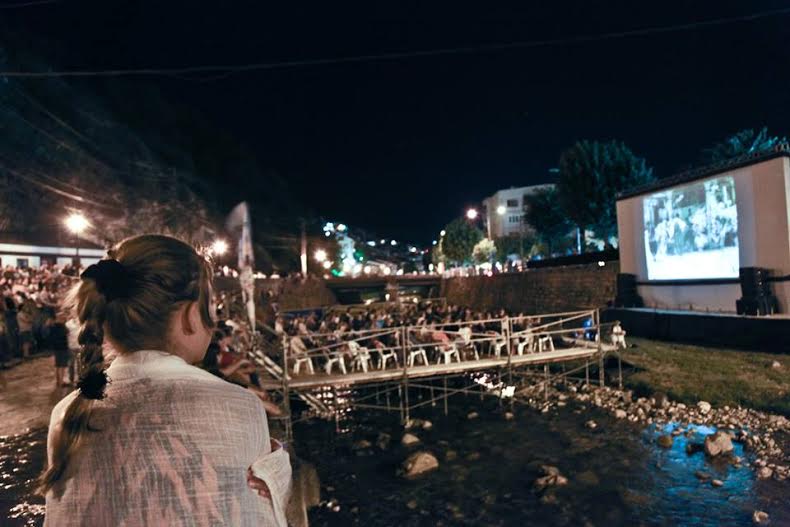