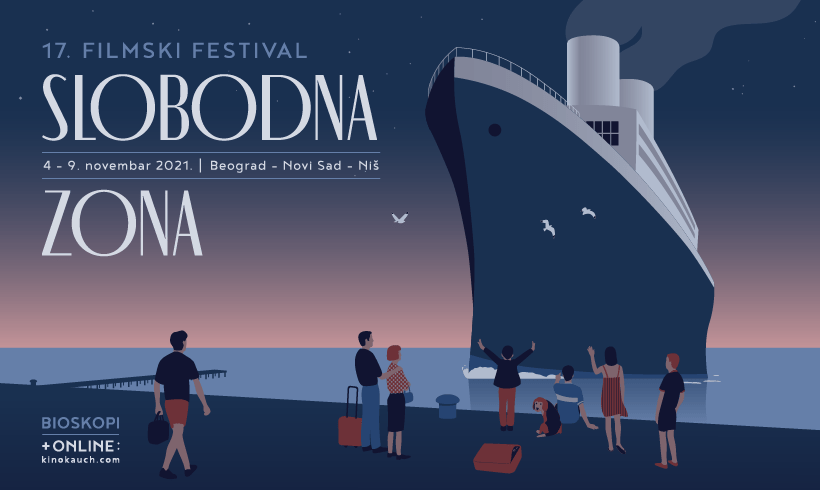 Film festival Free Zone will take place from 4th to 9th of November in Belgrade, Novi Sad, and Niš. The festival will simultaneously be opened in the Kombank Hall, the Cultural Center of Novi Sad, and the Cineplexx Cinema with the film Roadrunner: Anthony Bourdain.

This year’s selection consists of more than 60 art-house feature films and documentaries. They all stand out with authentic expression, relevant topics, reflections on past events and their impact on the present, and personal and collective experiences caused by political decisions. The individual’s need for finding its expression and its own path in imposed social frameworks, the need for dialogue, the noise between the speaking parties… all of these will erupt from the big screen.

We present you the main favorites of the festival:

Roadrunner: Anthony Bourdain – Again with Bourdain about food, people, and travel. A film about a man, who has proved to be one of the best food writers, will open the Free Zone. The beauty of this documentary is that people who knew Bourdain talk about him and do it from the bottom of their hearts. The film also uses artificial intelligence to recreate Bourdain’s voice.

From Joachim Trier comes the feature film The worst person in the world with which the director completes his trilogy Oslo. The film is a modern drama about the search for love and meaning in modern Oslo and follows four years of thirty-year-old Julie on her path to self-recognition. The Norwegian director skillfully emphasizes all the challenges that modern society brings with it and his charismatic acting team helps him a lot with that. Anders Danielsen Lie also appears in this film, and Renate Reinsve was awarded the best actress at the Cannes Film Festival for her role in this film.

The most beautiful boy in the world is a documentary about Bjorn Andresen, who was in 1971, during the world premiere of Death in Venice at the Cannes Film Festival, was proclaimed the most beautiful boy in the world by the brilliant Italian director Luchino Visconti. When he said this, he didn’t even think that he would cast a shadow on the life of the young actor Bjorn Andresen, who plays the role of Tadzio, and that shadow hangs over him even now, 50 years later. What was behind the scenes and how it affects the life of adult Bjorn Andresen today, is the theme of the film. On the occasion of the 50th anniversary of the premiere of this film, a retrospective of Lucin Visconti’s films will be held at the Yugoslav Cinematheque.

The feature film Murina will be presented in the regional selection Horizons of the Balkans. This thematically provocative film is this year’s winner of the Golden Camera at the Cannes Film Festival. He talks about the tense relationship between sixteen-year-old Julia and the authoritarian father Ante, when an old family friend arrives at their island home.

Little Mom – a film by director Céline Sciamma (Portrait of a Lady on Fire), which had its premiere at this year’s edition of the Berlinale, has been warmly welcomed by the critics who stated that it is her best movie so far. In the film, the author focuses with poetic precision on a crucial moment in the transition from childhood to adulthood, thus examining an important life topic from a decidedly female perspective.

Returning to Reims is a documentary film based on the cult book of the same name by Didier Eribon. The outstanding visuals of the film are followed by the voice of Adèle Haenel telling an intimate and political story about the French working class from the early 1950s until today. The backbone of France’s progress lay precisely on the back of the workers, whose children were quickly pushed out of schools towards their jobs, while their bourgeois peers easily continued their education.

The 8+ selection will include the film I Am Greta. In a world where questionable individuals are given space to address the public space, this film portrays the currently most famous environmental activist with the aim to allow a person promoting true values to address the planet from the cinema screen. Truly inspiring, Greta, who possesses the self-confidence that even adults will envy her, has found something worth fighting for, and that is the future of the planet.

The film that will be screened during the closing ceremony is Spencer, signed by Pablo Larraìn, an author well known to the audience of the Free Zone.

During the Christmas holidays with the Royal Family on the Sandringham estate in Norfolk, England, Diana decides to end her marriage with Prince Charles. Although there are rumors surrounding the love affairs and the divorce, peace is a must on the Queen’s estate, where everyone is supposed to eat, drink and go hunting. Despite, Diana’s awareness of the rules of the game, this year things will be completely different. Spencer is a film about what could have happened during those few fateful days.

Same as last year, part of the film program will be available to audiences throughout Serbia. The Kinokauch platform will host the online Free Zone from the 10th to the 20th of November.

It is noteworthy that the opening and closing films will not be available for online screening.

In addition to the already mentioned movies, the audience will have the opportunity to watch many other films within already known program sections, such as the International selection, the Regional selection – Horizons of the Balkans, selection 14+, EU – zone of change and Women’s line.

In light of the public’s growing interest towards environmental issues, the Green Zone was established last year in order to deal with ecological themes and the attitude towards the environment more in general. This year as well, within this section the audience will be offered a selection of movies that place the public in strict contact with nature, showing to which extent an individual is able to bring change in our ecosystem.

Zone without Borders – another Festival’s section that was established last year, will offer an interesting selection of films, such as Festival winners and films from countries whose production is rarely shown in domestic cinemas. Moreover, the audience from Belgrade will have the opportunity to watch the premiere of the eagerly awaited domestic documentary film Duga resa by the art collective Škart (Dragan Protić).

Realizing that there is room for the youngest festival audience to learn about many modern life phenomena through films, this year, in addition to the 14+ section, the Festival introduced the 8+ section. As its name suggests the primary target audience of this section are elementary school students.

Short films realized within the documentary film workshop of the Free Zone Junior program – Our Differences Are our Strengths and Dokufest from Prizren will be screened as part of The Future is Here program. The public will also have the opportunity to watch Lucy Walker’s films as part of the In Focus program, while screenings of the films from the online platform Kinokauch will be held at the Yugoslav Cinematheque.

The EU- Zone of Change program line continues to review and interpret socio-economic and political changes in Europe and their impact on our lives, while the Women’s line – among the favorites Festival’s programs, addresses questions of justice in cases of sexual abuse, mother-daughter relations, women’s identity issues and how to live with traumas of violence. Within the Compass of the Free Zone, panel discussions will be held after the screening of films in the Cultural Centre of Belgrade. The industry program – the Digital Propeller –  will once again take place online and the novelty of this year’s accompanying program is Sonar, a new space for the review of documentary content on the internet.

Tickets for this year’s festival edition will be on sale from the 20th of October at the ticket booths of the Cultural Centre of Belgrade, the Belgrade Youth Centre, the Kombank Hall, the Art Cinema Kolarac, the Yugoslav Cinematheque, the Cinema Fontana, and Cine Grand BIG Rakovica, as well as in the Cultural Centers of the cities of Novi Sad and Niš, and Cineplexxa Nis.