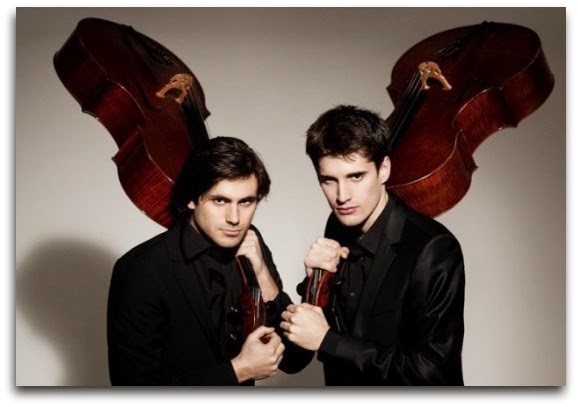 The young Croatian violoncellists Luka Šulić and Stjepan Hauser took the world by storm with their virtuous interpretations of popular rock hits – now they’re going to take EXIT’s Main Stage on Saturday, 12th July! From Michael Jackson, AC/DC to Nirvana, their classical instrument covers of pop-rock hits are met with awesome response, and garnering many fans.

One such fan is no one other than Elton John, who said of them: “…Go and see them live, because it really is astonishing! I can’t remember seeing anything as exciting as them since I saw Jimi Hendrix live back in the 60’s…”

THE BEST LOCAL AND REGIONAL ACTS AT HUAWEI FUSION STAGE!

One of the most favoured EXIT festival stages, HUAWEI Fusion, will host some of the best local performers this year!

The first festival day, among the already announced THE AFGHAN WHIGS, CHE SUDAKA, ORATNITZA I QUIMBY, brings the band which wrote some of the most important pages of Yugoslavian rock ’n’ roll history:DISCIPLIN A KITSCHME. Accompanying them on the Fusion stage are the Belgrade satirical alt-rock bandS.A.R.S whose songs touch social agendas and the problems of “the average” person. The second live stage of EXIT Festival will also host the Belgrade romani band, KAL, as SOPOT (BiH) and KILLO KILLO BANDA (RS).

Friday, 11th July, is the day when the audience’s favourite and masters of live performance ASIAN DUB FOUNDATION, HATHORS, and SEWARD perform on the aforementioned stage. They’re backed up by the none other than the silent heroes of Belgrade’s streets KANDA, KODŽA I NEBOJŠA. One the most ambitious new bands, the Croatian PUNČKE, will also be performing on Friday, along with Ida Prester (Lollobridgida) and her new fabulously fierce new project, FRAU CASIO.

The Fusion stage will welcome on the third day of EXIT Festival the New Zealand band SHAPESHIFTER, as well as the crème de la crème of the regional scene. The cult pop-rock band BOMBAJ ŠTAMPA from Sarajevo will also be playing on the same day. Together with Zabranjeno Pušenje and Elvis J Kurtović they created the Yugoslavian “new primitivism”, with the legendary actor Branko Đurić “Đura” at their helm. One of the region’s greatest favourite, Darko Rundek, is also coming to Fusion as part of RUNDEK CARGO TRIO, with violinist Isabel and multi-instrumentalist Dušan “Duca” Vranić. The bend which celebrates their 25 years anniversary this year are the punk group ATHEIST RAP from Novi Sad, and they’re coming to EXIT to do so with the Macedonian band BERNAYS PROPAGANDA, and a powerful group from Bosnia, DVADESETORICA,as well as the famous Serbian bands LOVE HUNTERS and COTTON PICKERS.

Finally, the last day of the festival is slated for the already announced BIRTH OF JOY, the Berlin made MIGHTY OAKS, Japanese TRICOT and international BETWEEN SKY AND EARTH. A dose of life’s everyday cruelty will be infused on Sunday at the Fusion stage by the Belgrade hip-hopers BEOGRADSKI SINDIKAT. VLADA DIVLJAN I LJETNO KINO BIG BEND, a collaboration of former member of the legendary “Idoli” and the band from Zagreb-Croatia, will provide a special treat at the festival by playing their own songs, but also monumental hits by Idoli, and more modern dance covers of Divljan’s love songs from his solo career. The last day of EXIT festival will be laced with melodies of world renowned hits, and neatly threaded by traditional Serbian motifs by the impressive DEJAN PETROVIĆ BIG BAND, which counts 13 members! The finale of EXIT festival will be joined by the Croatian rock band PIPS, CHIPS & VIDEOCLIPS.