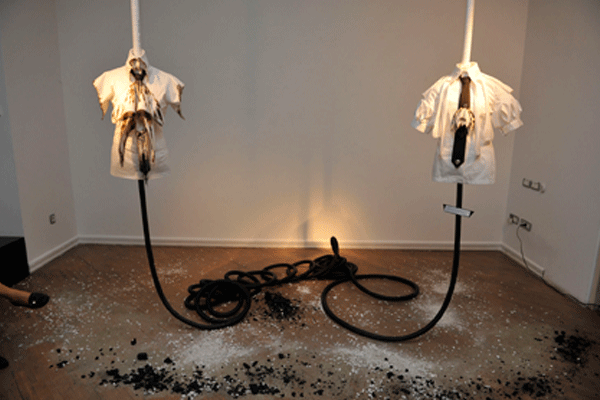 The fashion show includes a multimedia exhibition of twelve costumes – a video show including unique photographs and a display of three hundred exclusive ties. The slow frame rate video, deprived of jump cuts in editing and abundant of close-ups, evoked the purpose of the tie wearing routine, as well as characters of the connoisseurs. Nataša Šarić dedicated her studies to the symbolic of the tie phenomenon, thus emphasizing her authentic authorial work. Her complex performance includes serious research and various experimenting processes in emphasizing the artistic, therefore a different value of this significant accessory. The author’s leitmotif New Generation of Ties serves as a bona fide expression of a particular human character.

The program of the 34th Perwoll Fashion Week was announced in the French Cultural Centre, introducing the models in the line of this autumn’s fashion project, scheduled from October 25th to 01st November. The fashion event will be introducing its guest host – France – and many educational forums where fashion design experts from Paris will pass their experience to participants; the Embassy of France will be hosting the MariaLux Atelier fashion show, arriving from the very heart of the world’s fashion capital – Paris! The guests were greeted by Jean-Luc Goester, the Director of the French Cultural Centre. The founder of the Belgrade Fashion Week, Nenad Radujević introduced the project’s participants and collaborators. Among many media representatives and fashion designer, the cocktail party hosted many independent authors and fashion companies, among which – Mihano Momosa, Tamara Jarić, Lada Dragović, George Styler, Ana Leković (Mona), et al.

The Zone 45 Project was created a few seasons ago, designed with the aim to bring together and introduce the best-known regional fashion designers of the local fashion week events, and to meet the most talented designers with a wider audience, thus encouraging the development of the regional fashion scene in general. The young Serbian designer Ines Janković, invited by the organizers of Ljubljana Aquafresh Fashion Week, which took place in the Slovenian capital from October 14th to 16th, introduced her Glow fashion collection as a part of her brand Ines Atelier. Ines succeeded in charming the audience and the organizers with her timeless glamour seen through the urban style of women from all around the world. Ines Atelier brand is designed by Ines Janković, the designer who is introducing a fresh fashion brand, devoted to the elegant woman of refined taste and remarkable character. Ines Janković graduated from the prestigious Italian universities – IED in Florence and Rome and Istituto Maragoni in Milan. The young designer completely won the Serbian fashion scene with her originality and high-quality design – her clothes are designed in strict cuts, without much detail, dominated by particular style and fabric. Her clothes are prone to stylisation and the hand-made jewellery is a special feature of her design. Ines also introduced her collection, as a part of the Zone 45 Project, on the Perwoll Fashion Week in Zagreb (Croatia) on October 17th 2013. Ines is currently negotiating with foreign showrooms – the designer is planning to introduce her brand beyond the borders of Serbia. 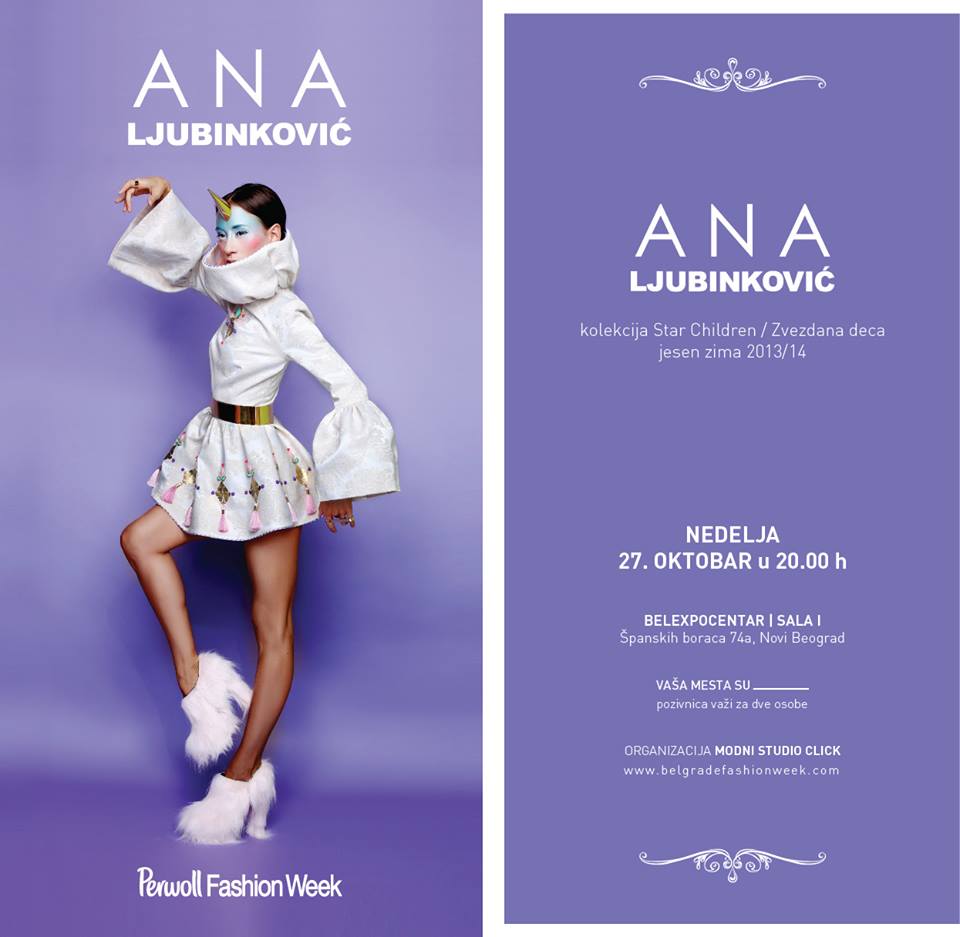 Presentation of young designers at the 34th Perwoll Fashion Week

Belgrade Fashion Week has influenced development of the local fashion scene significantly with its concept. One of the main BFW missions is to discover and promote new talents, and it is being done also via fashion shows of students who study at the most prestigious art and fashion academies. Therefore, the Belgrade audience will have a chance to see designs by numerous undergraduate and graduate students of the Faculty of Applied Arts, Accademie del Lusso, Megatrend and French Fashion College – Mod’Art at the forthcoming edition of Belgrade Fashion Week. The organisers of Perwoll Fashion Week will present young local designers’ talents and creative ideas at author fashion shows as well and via the concept of Fashion Vignettes, which has proven to be an excellent form of presenting designs by many authors for several years now. The fashion competition finals in form of a fashion show under the label Be Future by Perwoll will be an exclusive event undoubtedly (see more in the following news).

In the past ten years, thanks to its originality and high quality products as well as its skilful management, Ivko became an international brand to be found in over thousands of exclusive shops all around the world. Ivko continually promotes its collections at Premium Berlin, ENK Coterie New York, CIFF Copenhagen, Pure London, Modefabriek Amsterdam, Stitch Las Vegas, and it goes to CPM Moscow this season. At the forthcoming Belgrade Fashion Week, we will see a modern fashion knitwear line for women characterised by simple colours, numerous cultural and artistic references.

B FUTURE by Perwoll

The brand Perwoll has introduced together with Fashion Studio Click a special award for new, talented and innovative fashion designers, in order to give a strong impetus to the local fashion scene. The theme of this year’s competition B FUTURE by Perwoll was: black-and-white films and that eternal black-and-white fashion classic. Designers had to create pieces for futuristic black-and-white films in the year 2030. The jury, consisting of Zora Mojsilović – professor at the Faculty of Applied Arts in Belgrade, Ksenija Mraković – fashion analyst and designer, and Igor Todorović – fashion designer, decided on which of the designs had corresponded best to the given theme, so 12 finalists will present 3 designs each at B FUTURE fashion show in the scope of the forthcoming 34th Perwoll Fashion Week. The winner will be awarded a very valuable prize: financial support for creating a mini collection which she/he will present in person at London Fashion Week in the scope of its International Fashion Showcase in February 2014.

FASHION SHOW OF FASHION DESIGNERS FROM THE REGION

The project Zona 45, which was launched several seasons ago, keeps paving its way. Its objectives are to gather and present the most important fashion designers from the region in a highly professional manner within the scope of local fashion weeks, to introduce a wider public to the most talented authors and to stimulate development of the regional fashion scenes in general. This summer, fashion lovers in Croatia had a chance to see a collection by Serbian designer Jelena Stefanović for the first time. The event took place in Bol, a small maritime town on the island of Brac, where the Croatian public enjoyed within the scope of the leading fashion event Perwoll Fashion.hr Cruise collections by many designers who are involved in the regional project Zona 45. Our work within this project continues in October. Namely, our young designer Ines Janković will be presenting her brand INES Atelier at Ljubljana Fashion Week on 16th and at Perwoll Fashion.hr on 17th. Then, the project moves logically to Belgrade and its Perwoll Fashion Week, which will be held from 25th October to 1st November. Fashion aficionados in Belgrade will learn more about several talented designers from the region on that occasion: Robert Sever (Croatia), designer duo She:You (Bosnia and Herzegovina), George Styler (Serbia)

B Future by Perwoll

hall I Shows students and graduates