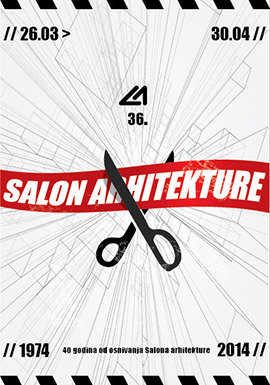 CURATOR OF THE EXHIBITION AND CATALOGUE EDITOR: LJILJANA MILETIĆ ABRAMOVIĆ, MA, CURATOR AT THE ARCHITECTURE DEPARTMENT AND ACTING DIRECTOR OF THE MUSEUM OF APPLIED ART

This year the 36th Salon of Architecture will be held in the Museum of Applied Art and it will last from March 26 to April 30, 2014. Great jubilee – fortieth anniversary of the establishment of the Salon of Architecture (1974-2014) will mark the event. The mission of the Salon in all the past years was to focus on the role and significance architecture has in development of a society, on plurality and quality of architectural responses and building standards as well as on the alternative and research ideas and projects. Besides highlighting architectural and urban design practices pursued here, the Salon was since its establishment a venue offering opportunities for sharing local, regional and global experience.

The follow up programme of the Salon will include presentations of guests from the country and abroad as well as of issues of significance for both the architecture and the society. A special part of the programme will be focused on the exhibition documenting the development of the Salon of Architecture and representing the awarded works in the period 1974 – 2014.

The Jury of the Salon of Architecture – Aleksandar Bobić, Aleksandar Keković, Tanja Manojlović, Bojana Pejić and Milorad Vidojević will decide on the Grand Prix and other awards and prizes within the following categories: architecture, urban design, interior design, publications, experiment and exploration, guest, architecture critique and architectural photography.

There were 264 works applying for the competition, out of which 114 were selected to be exhibited at the Salon. Seventy four of them were eligible for awards and prizes.

Members of the Council of the 36th Salon of Architecture are Slobodan Selinkić, Ilja Mikitišin, Ljiljana Miletić Abramović, Milena Obradović and Zorica Savičić.

Visitors will be offered opportunity to buy at reduced prices Museum publications related to contemporary architecture and design during the 36th Salon of Architecture.

Detailed information regarding the programme of the 36th Salon of Architecture will be available in good time via the web site of the Museum of Applied Art www.mpu.rs.

salon arhitekturesalon of architecture
by Dragana Kostica
Leave a comment