4 parties you shouldn’t miss if you are in Belgrade! 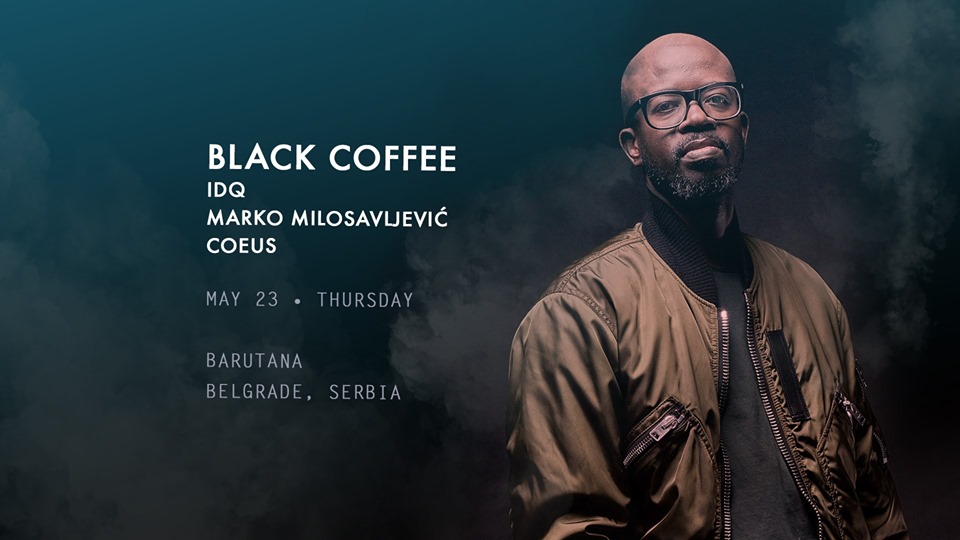 Open air parties in iconic club Barutana are kicking off this season.

If one heard a clamour and ululating emanating from the eastern provinces of South Africa, KwaZulu Natal and the Eastern Cape, announcing the recognition of a cultural phenomenon.. and their role in the development of this cultural phenomenon.. one could not argue were that clamour and ululating to be in respect of one.. that is the soul, spirit, talent and vision of Nkosinathi Innocent Maphumulo, one better known as “Black Coffee”.

Black Coffee was born in Durban in KwaZulu Natal and grew up in the Eastern Cape in Mthatha, before moving back to Durban to study music at Natal Tech where he majored in Jazz. His reason for studying music was because he felt that as a producer, he had to deepen his overall musical knowledge, develop his listening skills and advance his knowledge of music theory. Leaving tech prior to completion of his studies, Black Coffee with two friends Thandukwazi “Demor” Sikhosana and Mnqobi “Shota” Mdabe worked as backup vocalists for the renowned Madala Kunene. Deciding then to form an urban soul trio “Shana” the three moved to Johannesburg to make their way.

Keeping “Simply Hot And Naturally African” (the meaning of “Shana”) together as an ongoing project, the three also pursued their individual visions, collaborating on the way. Black Coffee was chosen as one of two South African participants in the Red Bull Music Academy in 2003 jump-starting him into the South African DJ scene – a decision he says he has never looked back on. His first big break was when his song “Happiness” was featured on the “DJs At Work” album.

2005, the same year as the release of Black Coffee’s powerful debut album “Black Coffee” saw the birth and formation of Soulistic Music, Black Coffee’s wholly owned 360° corporate structure, his team’s home base and the jump-off point for himself, and as time has evidenced for many others too. Black Coffee revealed that his first album was created using very basic music-making software. “I don’t know how to explain the production stages of my album because all I did was put down the basic ideas that I had, I didn’t use any MIDI controllers everything was played with a computer mouse. He added that the use of live instruments in a song is also very important, giving a track that final magic touch and bringing it to life.

A view through the Black Coffee ‘lens’, at the end of 2011, confirms a delightful, fresh and truly heart warming vista of dynamic and exciting creative production, glimpses of a genius unfolding and degree’s of difficulty, challenge and hardship. To many Black Coffee has led the ‘house music’ way.. establishing since a global pre-eminence in vocal house music and a business approach structured to unlock the plethora of opportunities offered by a converged digital realm driven by the songs and their performance.

Reserved, studiously academic, inventive, imaginative, quiet, enigmatic, shy and bold are but of the few ways in which many across the world perceive Black Coffee. No matter how he is seen he remains one of the very few club DJs in the country who genuinely understands the precise function of a music disc jockey: he does not simply mix songs, he re-interprets their previously unimagined musical possibilities, adapting and arranging as each work advises and so quietly creating new works that give life. When he debuted his interpretation of Hugh Masekela’s rambunctious jazz hit “Stimela” (2005 original South African release, 2008 UK release), Black Coffee simply demonstrated how it was possible to rework the South African canon music vault into club music, creating works that were acceptable to both the young and the old, a feat not easily achievable. It has required a decidedly original-inclined, singular mind such as this to be able to pursue this kind of music trajectory and the gold and platinum awards since are testimony to his resolve .

2007 brought another powerful Black Coffee release “Have Another One” which featured amongst others a host of great female vocalists and the likes of Bucie, Siphokhazi and Busi Mhlongo at the helm of an array of original works. With world demand and interest in a Black Coffee performance starting to stand up and shout so to speak, he began a new phase of growth in 2008 with a string of new Soulistic Music signed releases from Culoe de Song, Tumelo and the great Zakes Bantwini all achieving gold and platinum sales.

Highlights during 2011 included a nomination for the 2011 MTV Europe Awards in the Africa, India and Middle East category for “Best Worldwide Act”, the launch of Africa Rising and its first presentation (which included a 24-piece orchestra along with a band and featured artists performing Black Coffee’s works) at Moses Mabhida Stadium, four releases on the Soulistic Label including Culoe de Song’s “Elevation”, Sai & Ribatones “Here and Now”, Boddhi Satva’s “Invocation” and the label’s “Soulistic Cuts” and a Channel O Award for “Most Talented Male Artist”.

In 2012, Black Coffee’s Africa Rising DVD and CD (triple CD) featuring artists such as Bucie and the soulful Toshi Tikolo on international house hit “Buya”, garnered double platinum sales status in the space of a single month and went on to win “Best Dance Album” at the 2013 South African Music Awards. All of this transpiring shortly after Soulistic Music announced the signing of Thembisa born rising star DJ Shimza to the imprint.

Over the past 10 years, Soulistic Music under Black Coffee’s leadership has built a worldwide network of exclusive track licenses, tours and agents giving Black Coffee and other Soulistic Music artists their break into the international touring market where they have become regular features in cities from Sydney to New York, London to Luanda and Los Angeles to Athens.

Black Coffee continued to grow his profile internationally during 2013, gracing the decks at Cape Town Electronic Music Festival, Southport Weekender, ADE and for Berlin’s Panorama Bar, Iberian institution Circoloco and Boiler Room. He also forged a strong relationship with Bridges For Music by taking up the role of official spokesperson and ambassador for the music charity initiative.

Fast forward to present day and it’s starkly evident that the past 24 months have been no less than a rollercoaster of career milestones, accolades and achievements for the Durban born musical mastermind. Attention grabbing performances for the likes of Ultra South Africa, FabricLive, BPM Festival, Ballantines’ Boiler Room Stay True, Sonar Barcelona, Mixmag Live, SW4, an 8-date North American tour, RMBA debut tour of Japan, two consecutive seasons as a one of Circoloco’s most talked about residents and a 2015 world tour this past summer which spanned 17 countries across 4 continents over 5 months has elevated Black Coffee into the realm of global superstar in waiting.

In addition to that, he launched the Black Coffee Foundation Scholarship with SAE and Bridges For Music, scooped “Breakthrough DJ” and “Dance Nation Of The Year” for South Africa at the 2015 DJ Awards and unveiled his 5th artist album titled “Pieces Of Me” to an African audience this past September. Both “Pieces For Me” and the debut album single “We Dance Again” featuring Nakhane Toure triumphantly laid claim to the #1 spot on iTunes thereby obliterating any doubt that from family, to community, to clan, to culture, to country, to the world.. all are blessed by the productivity of such a great creative genius as is Black Coffee.

DJ, musician, label manager and creative all-rounder – Ellen Allien has carved out her own space in all these roles, creating a unique universe.

As one of the most iconic artists of her generation in electronic music to date, Ellen Allien embodies the core ethos of techno: a visionary who looks to the future for inspiration, carving out her own niche and presiding over an empire that has imbued the world of techno and dance music with her unique DNA.
A dynamic selector who prides herself on her extensive knowledge of music and dance floors worldwide, she has travelled the globe as a DJ playing at every major club on the circuit and commanding the big stage at festivals from Europe to South America. Ellen’s eternally creative mind has led to the production of seven solo albums, with an eighth (‘Alientronic’) due in 2019, and an extensive back catalogue of singles, EPs and remix work.
As a result of her unique appeal, she holds residencies at the world renowned Circoloco at DC10 (Ibiza) and Nitsa (Barcelona) with regular bookings across the planet at some of the world’s most prestigious clubs: Fabric (London), Shelter (Amsterdam), The Block (Tel Aviv) and Mondo (Madrid) to name just a few. Ellen also runs her own bi-monthly ‘We Are Not Alone’ raves at Griessmühle in her beloved hometown Berlin, also hosting in-store record shop gigs under the name Vinylism. She has channelled her vibrant energy and experience to the big stage at some of the world’s most infamous festivals, including Exit (Serbia), Off Week Sonar
(Spain), Melt! (Germany), Kappa Futur Festival (Italy) and lots more.
In her role as head of BPitch Control, and new label UFO Inc., Ellen channels her ceaseless passion for digging into A&R, seeking out and nurturing new talent while also signing music from established artists and friends. Parallel to her work as label head and producer, she also worked on remixes for seminal labels like Warp and Mute over the last year. Ellen’s leadership at BPitch Control, her beloved, influential label, has steered the label to its standing as one of the most important platforms for
underground electronica. BPitch operates in a league of all its own, influencing the scene in Berlin, Germany – stretching out with global reach.
Also dedicated to self-expression through visual media; art, fashion and her own personal styling, Ellen has been an intrinsic, highly influential part of the subculture in her native Berlin, cultivating her own identity while also guiding the evolution of electronic music in her hometown, and the rest of the world. Never one to look backwards, Ellen Allien’s constant push forward led to the recent conception of a brand new record label, named UFO Inc. in 2018. The platform is intended to be an incubator for rough, raw techno – an uncompromising stance, as per usual from Ellen.
A constant source of new ideas, energy and inspiration Ellen Allien is an artist whose comprehensive knowledge and intuitive approach to music is part of her genetic makeup. Her future-facing sound takes subtle influence from the blueprint created by the pioneers of techno, while painting a vivid, prophetic image of where we’re going.

On the 31st of May, Blondish will play in Barutana club.

2018 was truly the Year of BLOND:ISH: the birth of the ABRACADABRA label, the blossoming of ABRA events including a stage at Tomorrowland, yet another stand-out Burning Man set, label debuts including Warung and EXIT Strategy, regular international slots at Circoloco, Ibiza residencies with WooMoon, Black Coffee and at Scorpios Mykonos… Vivie-Ann and Anstascia D’Elene Corniere grasped every star they’ve reached for, and always in their own inimitable style.

Combining brilliant entrepreneurship with environmental activism, Vivie-Ann has continually challenged herself and the music community. Last year BLOND:ISH helmed a ‘sustainable raving’ movement which led to the hugely successful beach clean in Ibiza with locals and environmentalists. Vivie-Ann also appeared on IMS and ADE Green panels to discuss the issues, along with the imminent launch of her Bye Bye Plastics initiative.

This new phase of BLOND:ISH is already reaching new heights, with a new remix of Black Coffee’s ‘Wish You Were Here’ on Ultra Music, and her Coachella debut.