The Museum of Contemporary Art, Belgrade (MoCAB) is organising the exhibition 50 Artists from the Collections of the Museum of Contemporary Art – Yugoslav Art from 1951 to 1989 which presents the work of artists who changed the language paradigms of art in their time and uncovered (and whose work reveals) the relations between contemporary art and social reality. The exhibition will be opened from 16 October to 7 December at Heritage House (46 Knez Mihaila street), every day, except on Mondays, from 12 to 8 p.m. Admission is free. 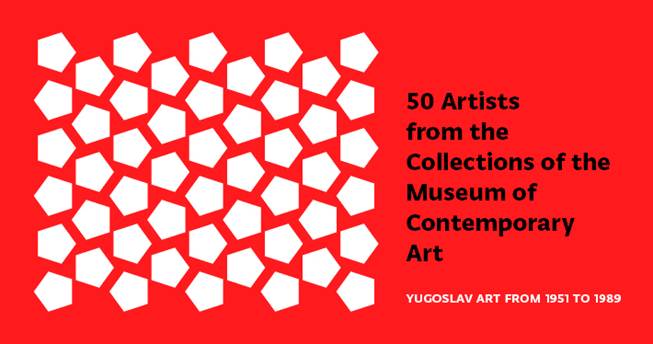 With the approaching 50th anniversary of the opening of the building of the Museum of Contemporary Art in Belgrade’s Ušće, hoping that this marks the completion of its reconstruction which lasted far too long (seven years), MoCAB hosts the second ‘preparatory’ exhibition for the future, far more elaborated and comprehensive museum collection display. As a follow-up to the preceding exhibition 100 Works from the Collections of the Museum of Contemporary Art—Yugoslav Art from 1900 to 1945, it is a symbolical gesture towards the general and professional audiences—after so many years given another opportunity to see a representative selection of the artworks from the Museum’s collections.

Art historian Ješa Denegri claims that existence of the Yugoslav artistic space may be traced from the first Yugoslav exhibitions launched in Belgrade in 1904, until the late 1980s when the second exhibition Jugoslovenska dokumenta in Sarajevo (1989) marked the symbolical farewell to that space. In agreement with Denegri’s statement, this time historical and chronological frameworks encompass the period 1951–1989. On the one hand, this is the historiographic framework of construction of the specific Yugoslav socio-political model of socialism conceived in the The People’s Liberation Struggle during the WWII, which assumed new direction after the year 1948 and the conflict with Cominform and the USSR. The period we observe started with a redefinition of the Soviet social model, erasure of its ‘relapses’ and subsequent changes in the politics of etatism towards devising a new model of self-management socialism, roughly outlined by the leading ideologist Edvard Kardelj already in the early 1950s. On the other hand, this is the symbolical framework of the beginnings of development of the new Yugoslav art scene, marked by the definite departure from the art of socialist realism. Decisive moment in the genesis of this new scene was Petar Lubarda’s exhibition in the gallery of ULUS (May 1951) which profoundly changed the contextual paradigm of visual language in socialist Yugoslavia. The exhibition and selection of artworks therefore commences with Petar Lubarda’s 1951 painting Fantastic Landscape and concludes with Marija Dragojlović’s 1989 painting Black Satin Box, also in accordance with the thus determined socio-political and chronological frameworks.

The basic idea for the display stems from several spatial dispositions. In this limited ‘non-museal museological’ space it was not possible to present even a partial analysis of the major phenomena in Yugoslav art of the second half of the 20th century. Moreover, the space does not facilitate creation of more elaborated and comprehensive thematic and topical segments, or grouping of specific art phenomena and their isolation clustering. And, finally, it was not possible to exhibit some of the key items from the collections of works in largest formats, which especially applies to sculptures. The basic idea for the display came with the spatial restrictions: to present chronologically in separate rooms—‘stanzas’ of the Heritage House—with reference to the dominant ‘decimal’ model of historizing Yugoslav art since the foundation of MoCAB, the art of respective decades through small confrontations, juxtapositions and dialogs of significant works conceived by the prominent artists of post-war Yugoslavia. This time, the very space imposed this logic of conceiving the outlook of each ‘stanza’, which presents the work of artists who changed the language paradigms of art in their time and uncovered (and whose work reveals) the relations between contemporary art and social reality.

One of the key conceptual standpoints of this reduced display is the assessment of MoCAB’s acquisition policies since the founding of the Modern Gallery in 1958 i.e. renaming of the institution to Museum of Contemporary Art in the newly erected building at Ušće, opened in 1965. Museum’s acquisition policy also confirms a clear orientation towards the Yugoslav art space—highly important considerations being timely reception, valorization and acquisition of the works of the most important individuals and most relevant artistic phenomena from each art scene in Yugoslavia. The selection and exhibition are, consequently, entirely based on Museum’s acquisitions from the given chronological framework, and exclude the subsequent purchases and donations made after the dissolution of socialist Yugoslavia.

Although this exhibition does not aspire at new, especially not normative readings of Yugoslav art from the second half of the 20th century in the limited space of the Heritage House Belgrade, every selection of art, even a showcase, demands a conceptual and curatorial explanation. This exhibition may therefore be observed as a draft and introduction into future, more complex reflections on the development of Yugoslav art in the historical period 1951–1989, which is the starting point of the display.

Patron: Ministry of Culture and Information of the Republic of Serbia

Also, we want to thank RTS, B92, TV Studio B, Blic, Politika, Danas, Vreme, NIN, SeeCult, City Magazine, Designed, for their media support, as well as all other media outlets that will report on this exhibition. We also express our thanks to Alma Quattro and DPC for their support.

ARCHITECTURE GUIDE, ART & DESIGN, CITY GUIDE, GALLERIES & MUSEUMS
5 Reasons to visit the Museum of Contemporary Art in Belgrade
WHAT'S ON
SIGMAR POLKE – EXHIBITION OF ONE OF THE MOST PROMINENT GERMAN ARTIST OF THE SECOND HALF OF THE 20TH CENTURY
WHAT'S ON
100 works from the collection of the Museum of Contemporary Art. Yugoslav art from 1900 to 1945