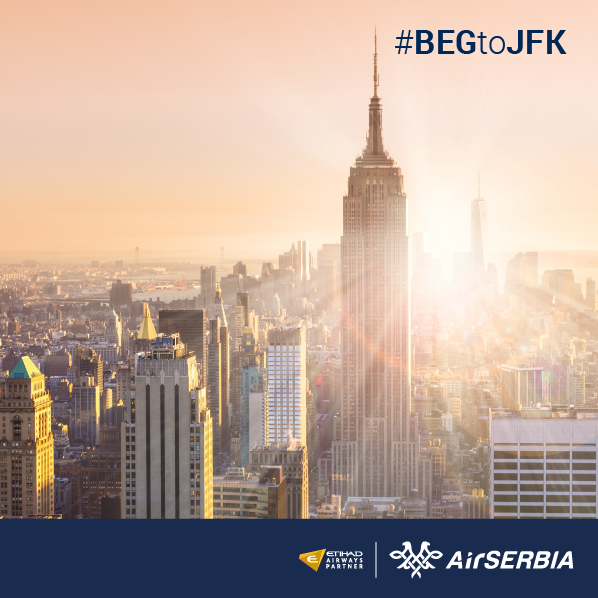 Air Serbia, the national airline of the Republic of Serbia, has announced that tickets for its historic new service to New York are now on sale.The announcement was made by Aleksandar Vučić, Prime Minister of Serbia, during this morning’s opening of the 38th International Tourism Fair in Belgrade, the largest annual tourism event in the Balkans.

The Prime Minister was accompanied by Siniša Mali, Chairman of Air Serbia and Mayor of Belgrade, and Dane Kondić, Chief Executive Officer of Air Serbia.

To celebrate the new service, Air Serbia is offering travellers special promotional fares, with round trips originating from Belgrade starting at only EUR 399 for Economy Class and EUR 2,499 for Business Class, including taxes and charges.

These special introductory fares will be available for purchase from 18 February to 24 February and can be booked through the Air Serbia website on airserbia.com, any Air Serbia sales office or travel agents.

The announcement also included the launch date for the flights which will be 23 June 2016.

“This is a great and positive symbol for Serbia. There are no originating flights to the USA from any other country in the region, which is why there is such a huge interest in the new offering from Air Serbia. I am very happy that today, at the Tourism Fair, we can announce the start of ticket sales on the Belgrade – New York route”, emphasised Prime Minister Vučić.

Air Serbia will launch a scheduled non-stop service between its Belgrade hub at Nikola Tesla Airport and John F. Kennedy International Airport in June 2016*, deploying an Airbus A330-200 aircraft on the route.

In addition, it was announced that the proceeds from the sale of the first pair of Business Class and Economy Class tickets will be donated to the Blic Foundation, an organization dedicated to providing humanitarian assistance in Serbia.

Siniša Mali, Chairman of Air Serbia and Mayor of Belgrade, said: “The Air Serbia New York service will have a huge impact upon Serbia and the city of Belgrade, bringing many thousands of business and leisure travellers from the United States. “Today’s announcement, that tickets are now on sale, marks a great moment and we look forward to the build-up over the coming months when the A330 aircraft arrives in Belgrade and the moment the inaugural flight takes-off in June.”

The New York service has been assigned flight numbers JU500 and JU501, the same numbers used by Air Serbia’s predecessor when the carrier operated non-stop flights to the United States 24 years ago.

Dane Kondić, Chief Executive Officer of Air Serbia, said: “We can feel the excitement building around our upcoming flights to New York and are delighted to announce the start of sales on this route.

“Our flight schedule has been carefully designed to offer guests convenient connections to New York from across the Balkans, as well as great onward connectivity upon reaching New York to popular cities such as Chicago.

“This vital air bridge has significant historical importance, which is reflected in the fact that Air Serbia has retained its flight numbers from 1992, the year of the last transatlantic flight between Serbia and the United States.

“We are pleased to report that our flight approval request with the United States civil aviation authorities is progressing well and we are on track for a successful launch in June 2016.”