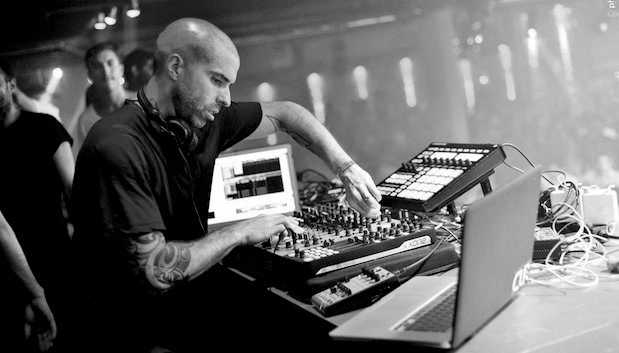 New serial of Apgrade Party serials will take place in Barutana club at Belgrade Fortress on the 27th of May. Special guest star this time will be Chris Liebing. Local support will be provided by Filip Xavi, Monosaccharide and Vlada Janjic.

In 1993, buying his records at Downtown Records in Giessen, he discovered the more electronic side of music, and one year later, he decided to open up a Techno Club, called “Spinclub”.

Chris Liebing is DJ, Producer, a radio host of a weekly show and the driving force behind the labels CLR and Spinclub Recordings. His sound has continuously evolved during his DJ career, always true to his Techno roots. He was one of the first DJs that used the new possibilities in the course of the digitalization of music in a consequent and creative way. The real-time manipulation of the individual elements plays an important role in his sets. Thanks  to the good co-operation with various software and hardware makers, his current setup provides  him with practically endless possibilities. He is a  DJ in high demand worldwide and is also part of the Collabs live act, together with the Dutch producer Speedy J. His productions and remixes appear in the play lists of numerous renowned DJs. Here are some milestones in his career:

It all started in 1990 in the area of Giessen / Germany when he was mainly playing Hip Hop, Soul, Pop and House. His growing passion for electronic music brought about the opening of his own club named Spinclub in 1994. At that time he also gained his first studio experiences and founded the label Soap Records alongside with friends. A job at Eye Q Records in Frankfurt provided him with useful experiences and contacts in the techno scene. When he was called in to fill in for a friend at the legendary Omen club, he received  standing ovations  from the crowd. From this day until the closing down of the club in 1998, he used to play there on a regular basis together with many international DJs.

In 1996 Chris left Eye Q and founded his first label called Audio. Before the label ́s closure in spring 1999, they released 17 tracks, amongst them his productions Audio 07 and Audio 11, which gained worldwide recognition. At the same time Chris developed a new passion by presenting his first radio show Evosonic Update which supplied the party crowd every Friday afternoon with party tips and vinyl critics on the radio station Evosonic. In 1999 his now well-established label CLR was founded. This was the time when he also started to receive top rankings in various categories of the reader polls of the popular music magazines, amongst which were “best national DJ”, “best remixer” and “best producer” on a regular basis.