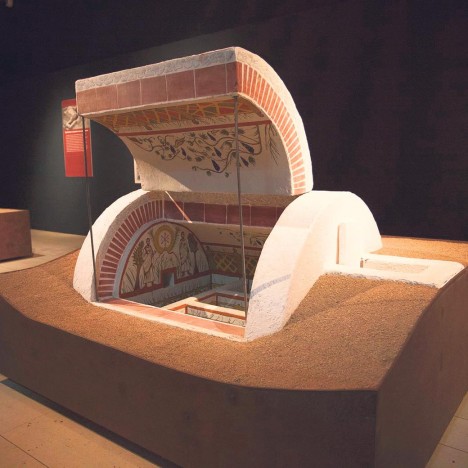 The director of the Museum of Niš, Slaviša Popović says about the exhibition:

Because of the great interest and even more so because of the importance of the sites and exhibits to which a large number of archaeologists and explorers came last year, we decided to provide residents and guests of the capital opportunity to learn about the unique antique site in the southeast of the country. Necropolis in Jagodin Mala near Niš was discovered in 1886, only eight years after the liberation of Niš from the Ottoman empire, and the first studies and excavations began in the early thirties of the 20th century. This site is among the few most highly researched archaeological sites in Europe, a necropolis itself by relevance compared with similar in large ancient city centers such as Sofia in Bulgaria, Thessaloniki in Greece and Solin near Split.

Jagodin Mala is one of the oldest neighborhoods of Niš, dating back to Roman ages. The neighborhood lies on top of an important archaeological site. Ruins of several early Christian sacral objects have been uncovered, most famous one is Early Byzantine Tomb with Frescoes, Monuments of Culture of Exceptional Importance.

During Ottoman rule, the neighborhood was situated where an important road to Jagodina entered the city, hence the name “Jagodina”. The term “Mala” is derived from Mahala, a Turkish word meaning neighborhood or a part of the city.