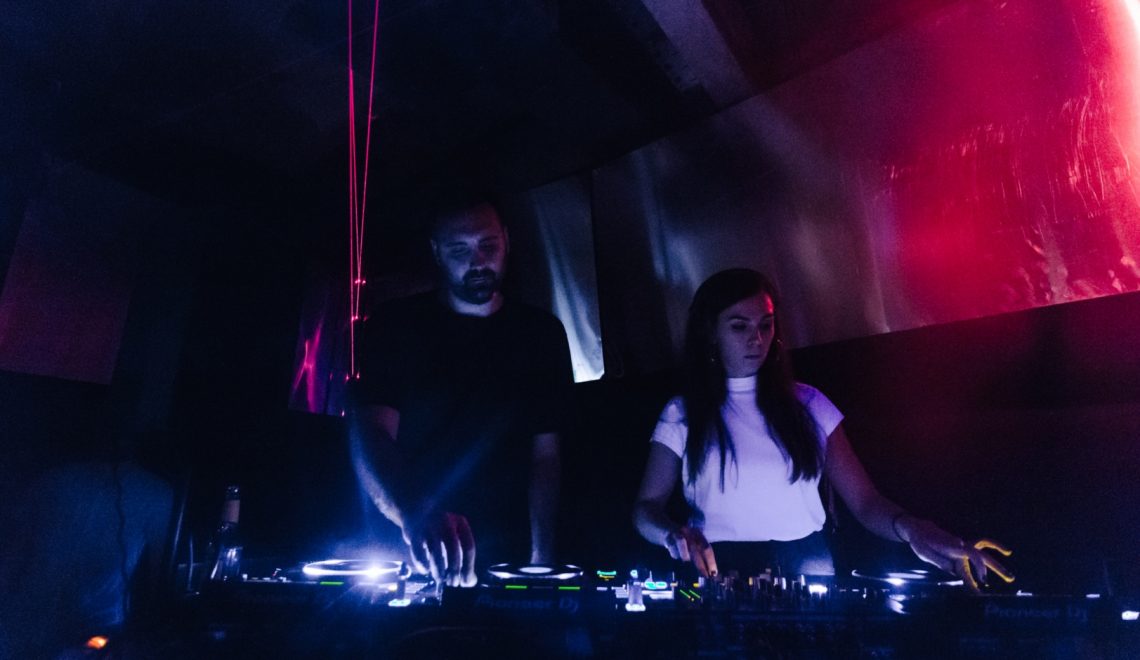 Belgrade’s DJ duo Banda Panda celebrates its 8th birthday on Friday, October 5, at the legendary Club 20/44, and invites all lovers of electronic music to join them.

This  Friday, along with Banda Panda Collective, we will have the opportunity to dance to the music of Manfredas, a DJ and producer from Vilnius in Lithuania. He has already spent years in the music business, working as a music editor for the Lithuanian MTV channel and being a member of the local electronic music heavyweights Metal on Metal. His debut single Pink Industry was released by Les Disques De La Mort label, founded by the acclaimed French electronic music producer Ivan Smagghe. He run a clubnight with his friends called Smala in Opium Club, Vilnius. 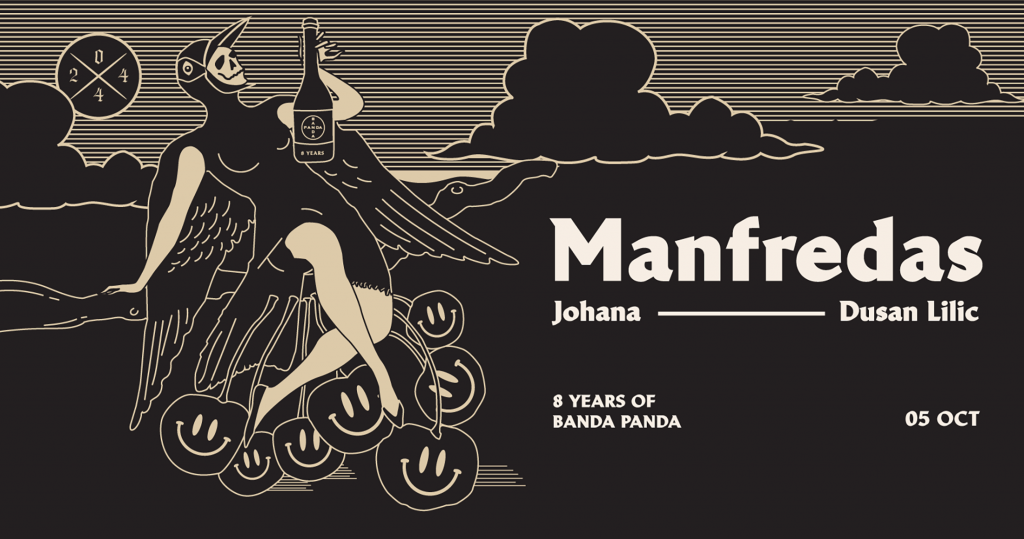 We talked to Johana and Dusan about this eight years.

Take us back to your first step.

Dusan: We met during our studies and in that time we realized that we share similar interests and sensibilities in the terms of music and design. We were young and when we threw our very first party we wanted to preset something different than already known formats of parties, which are too familiar to the local audience. We had an idea to throw not just an average party, but something more in the terms of content. In that way we started with multimedia. We invited our friends, street artists Kris & Gidra, former E++ crew, TKV and Lortek to create t-shirts on screen printing. Of course, everything smelled like colors but nobody complained and locals found it interesting to do something different in the club. When speaking about music we invited a friend from Berlin, Mikiko Morohasi and Pytzek from Zagreb. Warm-up was made by Neemlansi and Rap Cats, two projects which do not exist anymore, overall we left a good impression.

Johana: Comprehensively, these first eight years can be divided into the first or younger phase, when we in some way investigated and experimented with the idea of clubbing, in that period BP was connecting both other people and other media, such as video. It was a breathtaking creative experience and we had so much fun. Then there was a more serious phase where our focus shifted to music and our visions. Dusan and I have built up our own styles that complement and create what BP is today.

What was your favorite event?

Dusan: It’s really difficult to separate the favorite ones. We had some really great guests such as Manfredes, who is our guest this Friday. We hosted him on Christmas night about 1, 5 years ago, it was -10 degrees outside but he was really in the mood for making a blast. And it was definitely one of the best parties we ever made.  On the other hand, the organization’s greatest endeavor and challenge were Juju & Jordash. Their rider for a live act wasn’t realistic for our standards. They requested Roland Juno 60, Korg Poly 6 and Roland TR 909 drum, however somehow we managed to collect equipment in one place. But that day, it was raining and a half of the crowd didn’t show up, but it was great, as we were quite excited. There were not many people, but it was great energy, which is sometimes more important. It’s worth mentioning our party with Acid Arab, I think there were over 500 people in the KC Grad. In fact, every gig with them was great.

Johana:  In addition to these events that Dusan mentioned, I think every jubilee was important, because it completes a period and afterwards I am in the phase like “ok, now we are starting something new.” We love to play outside of Belgrade, that is, outside of our comfort zone where we find ourselves in front of unknown audience. It’s very exciting to play at the music festivals as well, since that’s totally special energy.

How did Belgrade shape your DJing?

Johana: Belgrade is a definitely a city with an exciting history. It was the driving force of social events with some genius people who lived in it. Certainly his influence and his heritage were transferred to us as well as to the choice of music we listen to and release. Listening to underground music and belonging to a subculture for me has always meant a certain political attitude and the struggle against nonsense, imposed values and omnipresent trash. The music that dominates the scene that we are part of has also transmitted to us, we learned from the older guys how they did it. In addition to them, the influence of the people from our generation is strong, because we work hard together and together we grow. And I think it is very important that there is good cooperation and support, especially in the city where clubbing is reduced to several clubs.

Dusan: Belgrade allowed us to go in the direction we wanted, because of the cities’ diversity. Belgrade really offers a wide range of music and arts, and that helps us on a daily basis and provides us with support. We think that it is important that people know what to expect from us and that they don’t expect only one music genre from our sets. 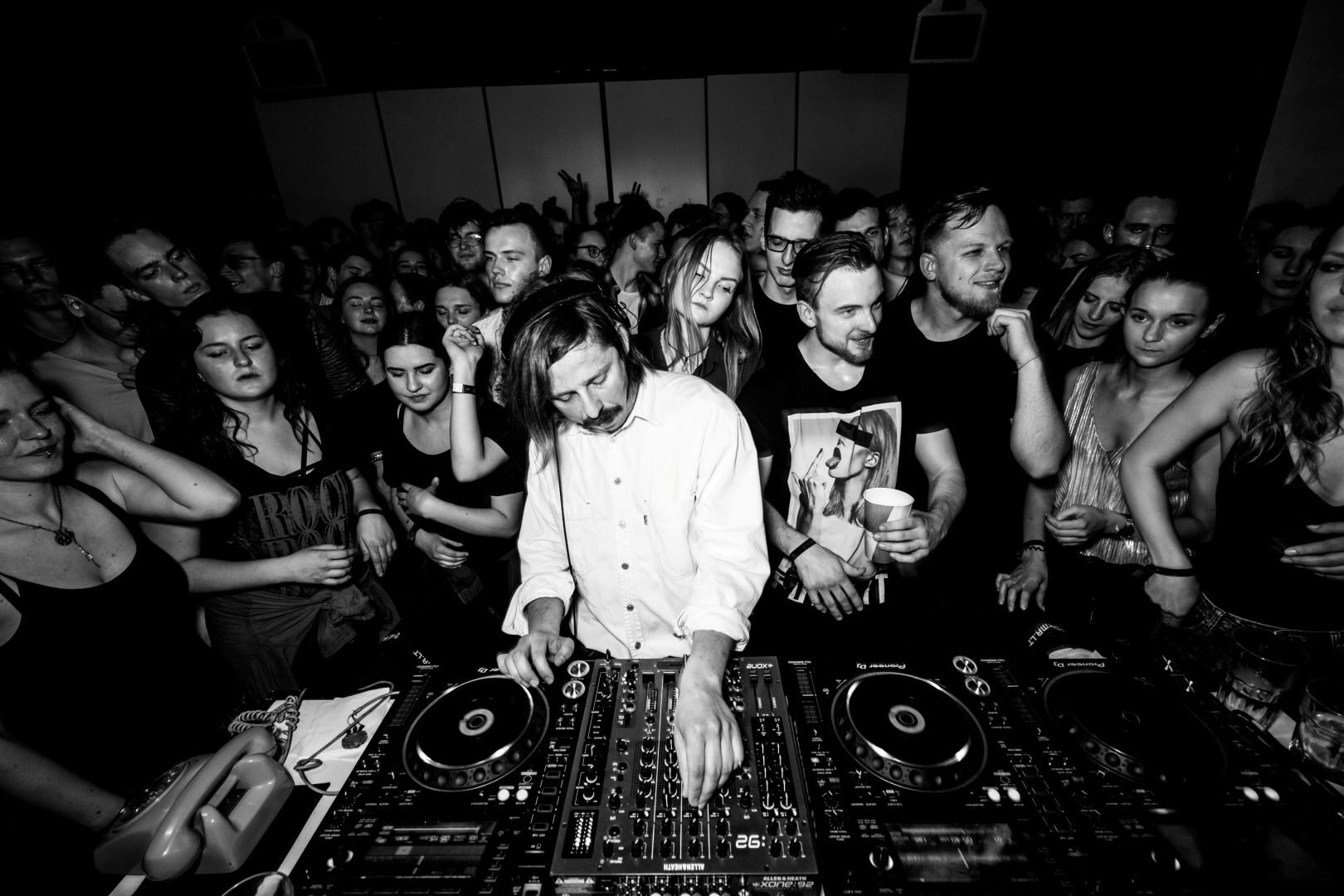 Has the Belgrade scene changed over the past eight years?

Johana: Belgrade, like every city, is one substance that is constantly changing, and that change has recently gone fast, but I’m not sure how much I like this direction. The clubs I was visiting don’t exist anymore, but I can not say that I am much nostalgic, they are appropriate to one generation and the city in one moment in time. I like the fact that Belgrade is a home to various events, good bookings, mini festivals, massive rave events and events for smaller crowds and that it gives opportunity for people to find themselves in the terms of music and other interests.

Dusan: Of course, the club scene is in constant growth, which of course is great. It starts to be profiled and every single person can fill its needs.

Two years ago you started Bipolar party series and this summer F-society, tell us more about them?

BP : Bipolar is the idea to create a series of parties that have a left-field character, so we always have one guest from the country or abroad. Up to now, guests were Dj Sundae, Moscoman, Alien Alien, Manfredas, Mangulica FM, DJ Overdose (live), Chorbika, WC7 & 33.10.3402. F-society was created in cooperation with the club  20/44 as an idea to place greater space for female DJs and producers, and as a platform for better networking. During the summer, parties were held every Wednesday, now in the winter period it will be less.

What are you up to next?

BP: First of all, this Friday is followed by the celebration of the 8th birthday party at the club 20/44 with a special guest Manfredas. And we are very excited 🙂 Otherwise, we are planning some great events in the upcoming period, but we will be talking about them when the right time comes.