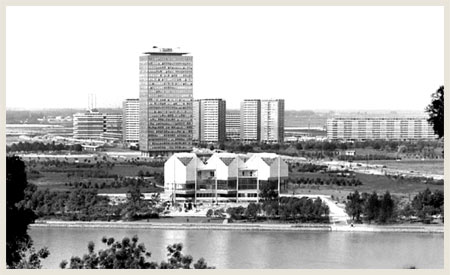 Opening of Belgrade Design Week  DIZAJNPARK, the exclusive exhibition of the 8th edition of  BDW accompanying this year’s theme “Inovacije 2” will take place on Tuesday, the 4th of June at 17 h at the Museum of Modern Art in Belgrade.

With the introduction of ten exhibitions from around the world, visitors will also get a unique opportunity to peek into Modern Art museum-the almost forgotten cultural institution of national importance, which has not worked for six years, but temporarily opens the door for five days. Admission is free of charge till the end of the exhibition, from Tuesday to Sunday, and professional workshops and exhibitions in the museum are just part of the festival, which will last until the 9th of June.

Belgrade Design Week is the first major event to be held in the Museum of Modern Art since reconstruction began in 2008. The building is located in New Belgrade, and ranks among the most interesting examples of modern museum architecture in the entire world. Declared a monument in 1987. Since its inception, the Museum of Modern Art is presenting and exhibiting  the most important artists, periods, movements and tendencies of Yugoslav, Serbian and international art of the 20th century. Visitors who attend this year’s  BDW will have the opportunity to see the exhibition of the world’s top designers, specially prepared  for the five days of DIZAJNPARK.

WHAT'S ON
Spaces of Excessivity at Salon of the MoCAB