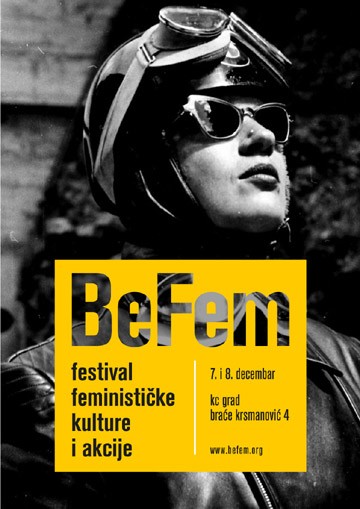 Back in 2009, when we started to play with the idea of organizing a feminist cultural festival in Belgrade, our biggest motivation was to make an event that we would like to attend ourselves – a fun and creative place to discuss feminisms. We wanted, and still want, it to be an open space, easy to drop in to, and a place where the threshold for entering a discussion should be low, because of course everyone can talk about feminism, if entering the discussion with a readiness to change some of what we have learned about how “things should be” so far. We feel proud that BeFem over the past years has showed that things don’t “have to be” in a certain way at all, quite the opposite, they can be in all sorts of ways!

We hope you will like this year’s edition of BeFem festival. As always it is impossible to summarize the program, but let’s say it reaches from clitoris to anti-racism strategies, via some queer salsa and turbo folk. As eclectic and political as usual, with other words. Come, join and change the world!

Opening of the 5th BeFem festival

How does the body work and how can we enjoy? During this combined lecture and workshop you get to learn all there is to know about the clitoris, and how to enjoy clitoris sex, on your own or with others.

With space for questions.

A lesbian room of ones own

A presentation about the project “I’m Every Lesbian” and thoughts about separatism.

Much has been said about the social and cultural phenomenon of turbo folk music. However, several questions were sidelined in the approaches taken thus far. Above all else – whether we can discuss at all of TF or “TF culture” as a social formation (or whether this is a sort of discourse related bond, an ideological clasp we use to situate ourselves as the subjects)? What sort of reception did TF have and what influence did it exert in the wider post-Yugoslav space and experience during the 90s, and what is that situation like today? And last but not least, does TF – as a popular form of everyday life, which we can see around us these days – really accomplish the wider output of emancipation, in which way and for whom? Olga Dimitrijevic and DusanMaljkovic will talk about feminism and turbo folk, as well as possible queer interpretations of turbo folk.

Why do we see so few women in the media? What topics are (additionally) considered to be women’s subjects? When making documentary shows and TV specials aimed at supporting and empowering women, what precedes the recording? First we will see clips from some documentary shows made by Sandra Mandic: I, A Village Woman, Macho Men and Tomboyish Women, Women’s Dialogues, Women in the Army, followed by a discussion with the author.

Katarina Loncarevic will moderate the discussion.

We will talk about the organization process and struggles of Ljubljana Pride. What is the connection between Ljubljana Pride and activism? What are the clashes between some activist groups and Ljubljana Pride. The lecture will be accompanied with photo and video material.

Discussion with Nina Hudej, the president of Ljubljana Pride and SimonaJerala.

Everybody is welcome, you all get to dance with each other (no partner required) and everybody gets to both lead and follow!

With Peter & Marcus from Stockholm

About friendship, feminism, art and the everyday

A presentation/discussion with h.arta group

Referring to issues such as public space, shared space, education, urban gardening, collectivity and friendship as a model for feminism, we would like to reflect on the relation between the possibilities and limits of political art and the complexities of the messy, unclear, banal everyday.

Opening of the photo exhibition by BojanaMinovic

After sold-out nights in Stockholm and Malmö it nowarrives in Belgrade! Moa Svan with Guests is a talk show produced beyond the establishment, rules and requirements.

Confessions on a dance floor

The party kicks off with Peter & Marcus who shows us all how to shake our hips in an energetic and inspiring QueerMerengue! And everybody gets to join!

Forum theater is one of the techniques of the Theater of the Oppressed which contains a short scene from real life showing violence and discrimination. The audience actively participates in the discussion, gives suggestions and tries out potential solutions to the given problem. The scene which will be presented by ALTERO Association for Personal Training, Education, Development and Empowerment will deal with domestic violence and gender roles as part of patriarchy.

Think outside the cocks

A guide through feminist de/construction of media practices which deal with production and representation of gender identities and new media activism against patriarchy and misogyny. Take a courageous cyber ride with a new generation of feminists.

“I’m Every Lesbian” is a city walk and an audio guide that tells parts of Belgrade’s lesbian history. Based on interviews with lesbians living in the city during November this year, the walk tries to capture both some of the personal as well as the official lesbian history of Belgrade. The project was also done in Tirana, Albania in September 2013 and will be executed in Norrköping, Sweden in the spring of 2014. The walk is about solidarity and history writing because when no one is writing our history for us – we have to write our own.

How can I utilize the media as an activist and feminist? How can I make interventions in media spaces? How to spread feminism and activism just by clicking, while simultaneously smashing patriarchy? Answers to these and many other questions await you at the workshop lead by/moderated by/controlled by editors of the feminist and activist portal “Libela.org” – Hana Grgic and SvjetlanaKnezevic.

Women living in Vojvodina’s villages will talk to you about feminism in rural regions, new strategies of conquering freedom and innovative approaches to economic organizing and empowerment of women. They have faced numerous difficulties but that has not stopped them in courageously defying patriarchy, stereotypes and capitalism.

On this occasion we will also enjoy a presentation and sampling of gastronomical creations made by village women.

PR for the poor

Biro Radost is a non-profit service for public relations, with the aim of raising visibility of organizations and projects of civil society, or those from the cultural, art and media spheres; as well as raising visibility of socially responsible entrepreneurship and social entrepreneurship. They work on developing PR strategies and managing public relations, from the project preparation phase all the way to the project reporting phase. Biro Radost will hold a one-hour workshop where we will brainstorm ideas on how we represent ourselves, analyze media editorial policies and then see how these two components come together in a very brief but very often the most important instance – the media headline.

The workshop is moderated by VedranaSunko.

This is a new form of activisms which consists of using tools once considered symbols of women’s oppression and installing products of that work into public space. In that way we will show our respect for unpaid work that has unjustly been undervalued, ignored and simply perceived to be of less worth because it was mostly done by women. Join us and show us your skills, come to remind yourself or learn about the basics of knitting/crocheting. Everyone is welcome regardless of previous experience. While we work with our needles we’ll discuss important issues, just as our ancestresses did before. On this occasion we’ll go through activist, feminist and political topics.

The discussion will be led by Leila Seper.

Valerie KyeyuneBackström main focus is questions surrounding racism, whiteness as norm, whiteness as superior and how it affects our daily life. In this interactive workshop she will adapt a broader intersectional approach to show how we all are constantly disadvantaged and privileged in the system – and how different ways of oppression interacts.

Internally Displaced is a theater performance created during five days of the documentary theater atelier ‘Transforming Trauma through Art: War Rape and Collection of Self and Community’, which was organized by Forum Civil Peace Service, forumZFD, Kosovo office. The atelierused excerpts of war rape testimonies from the OSCE Verification Mission report ‘Kosovo as seen, as told’, which documented, among other atrocities, the rape of women in the Kosovo war, as a source for getting to know the matter as well as for building the performance. The words spoken at the performance are direct words taken from the testimonies of rape survivors. The documentary theatre atelier was realized in partnership with Kvinna till Kvinna in Kosovo.

Conceived and directed by Elizabeth Hess, in collaboration with the ensemble.

Time for discussion with the ensemble after the performance.

Do you have a boyfriend?

BRING POETRY INTO YOUR LIFE!

How do you sing feminism?

You will be given an opportunity to see poetic performances especially prepared for BeFem on how regional poets create poetry, consume and demonstrate feminist practices.