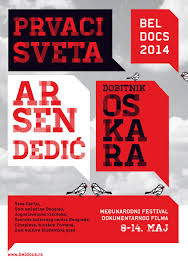 Seventh International Documentary Film Festival BELDOCS will be held from 8th  to 14th  May in Belgrade. During the seven-day festival, 34 of the best works of recent documentary film productions from around the world and from Serbia will be presented. Films will be shown in six program areas: Serbian Official Program, the International Program, 3D, BELDOCS supports, Kosovo and Metohija in Focus , Out of Competition. Special program will be dedicated to the celebration of the centenary of the First World War. In the film selection participated: Darko Lungulov (director), Mladen Vušurović (founder and director of BELDOCS ) and Aleksandar Hadzi – Djurovic (director). BELDOCS 2014 will be held in Sava Center, Belgrade Youth Centre, the Cultural Centre of Belgrade, the Yugoslav Film Archive, cinema Fontana, Cineplexx, Dom kulture Studentski grad.

BELODCS 2014 will be officially opened on May 8th  at the Great Hall of Sava Center Serbian with premieres of two outstanding achievements of fascinating personalities from this region who have made ​​very successful careers in the field of sports and music. A film “Football coach Zoran and African Tigers” directed by Sam Bensted from UK will be shown at 7 pm. The film follows an experienced Serbian football coach Zoran Djordjevic and his way of creating the first national team in the newly created state of South Sudan. After that, at 9 pm , “My craft ” by Serbian director Mladen Maticevic will be shown to audience. It is a film about the life of an unsurpassed Croatian singer Arsen Dedic.

On May 13th and 14th  four more films will be shown at the Sava Center. “The inertia of the past,” a historical documentary directed by Dejan Vražalica, highlights one of the most important dates in the history of Serbia in 20th  century: 27th March 1941.  when the citizens of Belgrade and almost all cities (as in Sarajevo, Podgorica and Skopje ) went out to the streets and clearly expressed their attitude against the cooperation with Nazi Germany and Fascist Italy. At the same time air force officers had committed a military coup and replaced those who signed the Tripartite Pact. The very act sparked anger and reprisals of Hitler. The story of this unique event in Europe at that time is on the program of BELDOCS Festival on May 13th  at 7 pm in Sava Center. That same evening at 9 pm  will be shown the latest movie of double Oscar winner Errol Moriss “Unknown Known ” The film brings us a portrait of the influential American politician Donald Rumsfeld ,one of the key figures of the war in Iraq.

German film “Song from the Forest” by Michael Oberta, the winner of the most prestigious documentary film festival in the world IDFA, documents the life of an American who has lived for 25 years with Baják Pygmies in the Central African jungle. He was married to one member of the tribe. They had one son whom he took to New York with himself. Belgrade audience will have the opportunity to see this story about the crash of trees and a skyscraper on May 14th  at 7 pm at the Sava Center .

BELDOCS 2014 ends on May 14th  at 9 pm with an award ceremony and also with the screening of this year’s Oscar winner in the category of documentary films “Twenty Feet from Stardom,”  by Morgan Neville. It’s the untold true story of the backing vocals of some of the greatest music legends in the twenty-first century, such as Bruce Springsteen, Stevie Wonder, Mick Jagger and Sting among others. However,  these world-famous personalities are not the focus of the film, but the life stories of many backing vocals. The projection of this fascinating achievement is realized in cooperation with Film Forward initiative and the U.S. Embassy in Belgrade. Film Forward is an international touring program, which was established with the aim of improving cultural cooperation, understanding and dialogue around the world through film screenings, talks and lectures.

Guests of the BELDOCS festival will be: Halil Efrat, director of the film “Album 61″, Franziska Schönenberger, Jayakrishnan Subramanian, authors of ” Mom and Dad “, Zoran Djordjevic, the protagonist of the film ” Football coach Zoran and African Tigers” and numerous editors of documenary programs of the region ( RTRS, HRT, All Jazzira, RTV Slovenija, MKTV , News ) who are interested to buy the Serbian documentary films for their programs. .

Ten films from Serbia will fight for the title of The Best Serbian Documentary: “My Craft ” by Mladen Maticevic,” The Boundaries are Disappearing,” by Ive Radivojevic, ” 2 & 2 “, by Vladimir Perovic, ” Živan real punk festival ” by Ognjen Glavonjic, ” The Inertia of the Past ” by Dejan Vrazalica, ” The Undertaker ” by Dragan Nikolic, “We were the World Champions,” by Ivica Vidanovic, ” When your dad buys you an elephant” by Marija Zizović, ” The Bicycles Tell Stories” by Milan Lisice and “The Lion from the Other World ” by Marko Cvejic.

The decision will be introduced by the jury consisted of: Goran Gocić ( film critic and author, winner of the NIN Award), Dragan Petrovic (director and last year’s winner of BELDOCS ) and Đelo Hadžiselimović (editor on HRT).

When the Festival is finished,the best films will be screened as a part of the tour called BELDOCS EHO

in twenty towns and villages in Serbia .

Realization of the Festival is supported by the Ministry of Culture and Information of RS, Goethe-Institut in Belgrade, the Israeli Embassy, the U.S. Embassy in Belgrade .