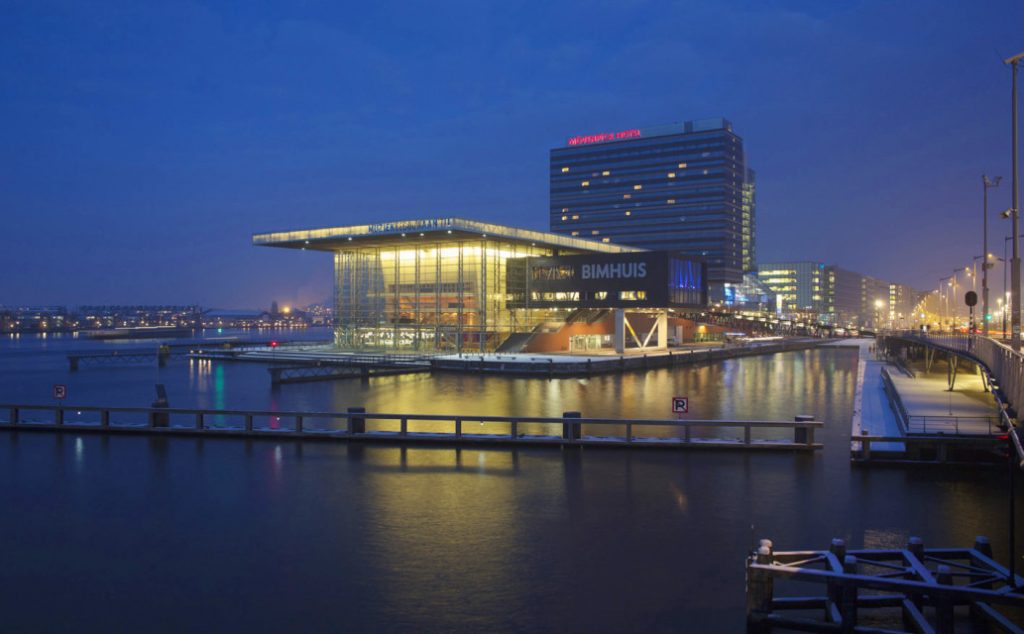 Bugge Wesseltoft, Henrik Schwarz and Dan Berglund will kick off their ‘Trialogue’ world tour October 15 with a special live(stream) performance at the Muziekgebouw aan ‘t IJ.

Following from 2012’s phenomenal solo set – one of Boiler Room’s true early-era highlights – we’ve always sought to get Henrik Schwarz back on our screens. His productions and remixes for the likes of !K7 and Innervisions cemented him as a star of 00s electronic music, but more recently the ever-inventive German has been branching out — most notably into the world of jazz and neo-classical, alongside celebrated Norweigan virtuoso Bugge Wesseltoft on 2011’s Duo.
The successful pair have now absorbed bassist Dan Berglund into the throng, and are primed to release a new album, Trialogue, on Jazzland in October. The opening date on their forthcoming world tour will take place at the waterfront modernist concert hall Muziekgebouw aan ‘t IJ as part of Amsterdam Dance Event – and Boiler Room will be there to broadcast it as a world premiere.
Here, we get another exclusive: the first interview with Henrik about his new project, and the challenges that blending live sampling with freeform instrumentation presents. Not that he seems especially daunted by the task…

You first debuted Dan Berglund on bass as part of the live Ensemble in Oslo only last year, and now he’s credited as a core man behindTrialogue. How did the progression from him being a touring member to a full-fledged one occur?
Well, after Bugge and I did our first album Duo, we always had the idea of expanding into something else. That Oslo concert was our first real try at it. We were suggesting string quartets, but both agreed immediately on Dan on the bass. I loved his playing with the Esbjörn Svensson Trio. What Bugge and I do on stage feels special, with me sampling him and then bouncing those sounds back and forth; this is not something a usual jazz musician wants to be involved with. Dan, however, enjoyed when I threw some bass notes back at him from stuff I had sampled – and when you do that with great musicians, and they adapt, you easily find interesting new lines. That creates such a huge potential, especially in this natural and quite playful environment. We decided to bring him again and work on a couple of songs, to see if we could take it somewhere else. When he walked into the rehearsal room, I was immediately like, “this works!”

Do you ever begin these tracks with a defined idea? Or is it just the case of jamming, fixating upon the key moments, and then using those as building blocks?
There’s not a fixed rule with how we do it. When we play a concert, I might hit record and tweak it afterward, until there is something that evolves from the chaos — something you recognise, because it’s somehow special. I don’t use headphones when we play a concert to pre-listen what I send to the speakers. It may be the case that I go, “oh, this note is wrong” or “this needs moving, this needs to be pitched” so I remove it and progress…if I’m lucky, and the result is interesting, then we try to nail a song around that little melody or bassline. This is all happening in real time, and not at all randomly. I’m trying to grab something relevant out of their improvisation; something that could be more.

It’s interesting to see you speak about what sounds like an organic process — in your Slices feature, you call it the “unhuman construction of melodies”. And yet a lot of people withdraw from that idea, believing that digital interference detracts from traditional instrumentation.
Music has been around for hundreds of years, and most melodies to come from a human brain have been written down already. Along the way people have used drugs to expand their capacity, just to grab that extra line that nobody had heard before. What we create is not a machine melody. I would reject that too, it’s not what I’m after. It’s super important to me that the source is coming from a human brain. But if you just slightly shift it, either the positioning time or the pitch, then suddenly you have a line that a human brain wouldn’t play. But when you listen to it…it’s touching! That’s what I’m looking for. And I have a feeling it’s working pretty well. Plus, I find it super funny when the guy who plays the line originally sometimes can’t handle the minor difference, and has to maybe practise for half an hour to adjust. It’s fascinating to me.

Trialogue starts off on a much softer tone than Duo; more delicate and precise. Throughout it feels as if you personally are happy to adopt a subtle role, and let Wesseltoft and Berglund take central positions. There are more extra flourishes: swooping bows, busy percussion, undulating melodies. It certainly doesn’t feel like an average electronic-jazz hybrid.
I’m not certain yet how it’ll be seen in retrospect. Dan has brought a heavy weight, and it’s a completely different dynamic now. Previously it was a 50:50 situation: if I suggested something and Bugge said no, or vice versa, we would be stuck and go look some place else. If you have a bass and a piano, you already move closer to the traditional idea of a jazz trio. The harmonic environment is more settled, and from the moment they play together, you follow some kind of established route. It is for sure more toward a conventional classical jazz album.
From a personal perspective, I wanted to write songs. I wanted to work on arrangements, melodies, harmonies; the last record was far more improvised, using mostly a computer and grand piano. It was very rough, but had a certain beauty also. I wanted to capture that beauty once more, and refine it.

When it comes to upcoming live performances, I’m interested to know how you went about picking the venues. It kicks off with us at ADE, but the tour dates include The Barbican, Philharmonic Halls in Essen and Cologne, and similarly grand spaces.
The priority for the sound is to be right. For me, as a dance music producer, there might be some misunderstanding! People arrive expecting a party like, “so where can we dance?” — but this is not really what we are about. [Laughs]
When I played my first seated audience with Bugge, I was overwhelmed at how much energy was in the room with people just listening. We take quite a lot of confidence now that, whenever we go to these really high-class concert halls, there’s always people working there who truly know so much specifically about sound. If you have the opportunity, of course you do it. I find it amazing still to get people to come to these places, if only for the experience. We also play jazz clubs and things like that – but yes, this does look like quite a spectacular list!

Finally, does it take a shift in your mentality to go back and forth between DJ sets and performing within the trio? At ADE you are juggling both – is it tricky to dive back into the realm people know you for, or is it more two sides of the same coin?
Two sides, absolutely. I mean, I’m jumping around with Wesseltoft and Berglund! I love all aspects of it. The electronic world is where I come from, and where I stand. But for my work as a producer it’s very inspiring to go to other places, find ideas and expose myself to weird situations. Such as concert halls, performing alongside two of the best players in the world, for example. It feels like walking out on a lake coated with very thin ice when I do this kind of stuff – a different thrill. Plus, the inspiration overlaps in circles: I play a techno set somewhere, and take that to a jazz stage the next day; and then cross back over again with fresh ideas. It’s super exciting.