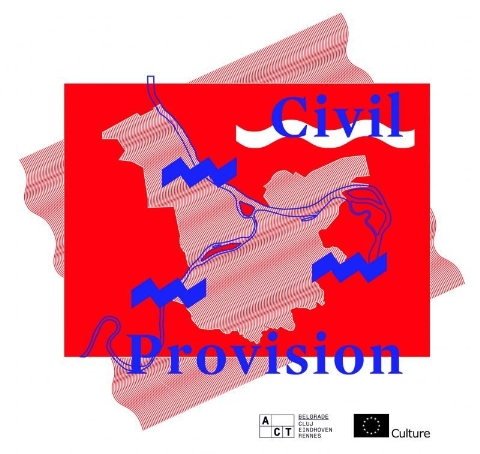 The fourth exhibition of the A.C.T. DEMOC(K)RACYproject, which focuses on a bottom-up awareness of European democracy through actual cultural exchange, fostering awareness and relations by a combination of international residencies and exchanges of students and tutors, by seminars that stimulate thinking and acting and by exhibitions which open up sensibilities.
With
Keynote text Dubravka Sekulić
informal mappers Jozua Zaagman and Francois Lombarts
graphic design Gabriela Baka
Artworks in public space Paul Segers, Matthijs Bosman and Jeroen Doorenweerd
spatial designer Anthony Kleinepier
brought together by Freek Lomme

Civil provision! stimulates the desire of people for exchange and production at Belgrade coldspots (rather than hotspots) through the heart-warming power of the artistic imagination. Rather than showing productions in a gallery space, the artistic services will give rise to provisions in the streets of Belgrade, providing transcending and poetic opportunities to the people’s public wishes.
The gallery space is used as a command centre during production and will become an information centre for the duration of the show. At the opening of the exhibition the artists will officially hand over the authority over their work to the people. On site, artists and users will cut the ribbon to express the transfer symbolically. A newspaper will be produced to spread the information, motivation and opportunities the project produces and distributes.
The project therefore necessarily focuses on informal demands and social opportunities that remain hidden and, through this, hopes to give rise to artistic materialisations which infect the bottom-up awareness and foster actual provisions opening up for exchange and usage. Here, a locally situated exchange becomes the material basis of small economics in a wider immaterial field.

Effectively: writers will describe the Belgrade urban subject in general and relate this to wider currents, field workers will walk the streets in a quest for offbeat demands at public coldspots, the mappings will be condensed to focus on demands and to focus on sites, and in response artists will give rise to settings and modes for exchange. This will be captured in a newspaper and an exploratory exhibition in the former command centre.
Made possible thanks to:
The European Cultural Foundation
The municipality of Eindhoven
All project partners!