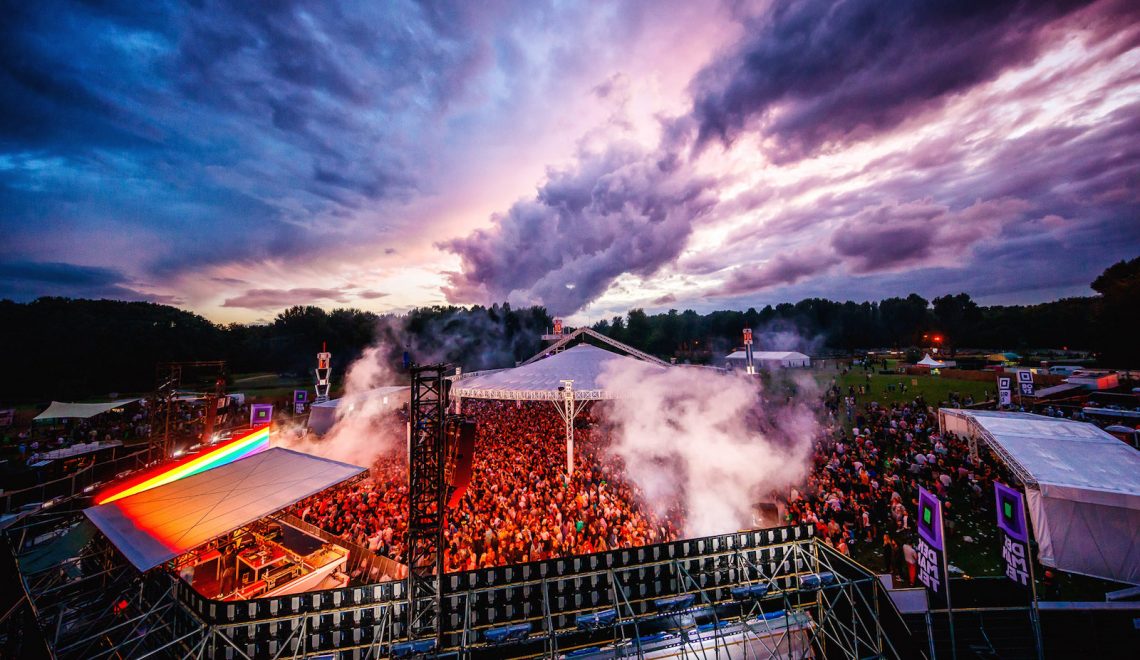 On the second evening of this year’s Dekmantel Festival, the spiritual jazz artist Idris Ackamoor told the crowd that his band had formed in Amsterdam 45 years ago.

Ackamoor, 66, then started reeling off some of his old haunts. “Who remembers the Literary Café?” he asked. No response. “What about Cosmos? You must remember Cosmos!” Nothing. It wasn’t until he mentioned Paradiso, which is still open, that he was met with a loud cheer of recognition from the audience. The crowd in Bimhuis were far too young to remember the spots Ackamoor visited during his first time in Amsterdam, but they knew and appreciated his music. Same goes for the Brazilian artist Marcos Valle, 73, who performed a couple of hours later. Valle’s rendition of “Estrelar,” a 1983 boogie tune about bodybuilding that’s become a cult classic in Europe, was sung word-for-word by much of the crowd.

In five years, Dekmantel Festival has developed into a magnet for young, clued-up lovers of electronic music. It has slowly and successfully expanded its musical remit beyond the staples of house, disco and techno, while also elevating its core artists to new heights. Emboldened by the success of Motor City Drum Ensemble on the main stage in 2016, festival organisers this year threw plenty of curveballs into the programme. Acts like DJ Nobu, Ben UFO and Antal & Hunee were given closing sets, with thrilling results. Other acts were thrust into slots that recontexualised their talents, with Nina Kraviz, Marcel Dettmann and Motor City Drum Ensemble charged with opening the Selectors stage. (This was an especially canny piece of programming: all three seemed energized by the challenge, and it ensured that people arrived in droves at the start of the day.)

Here are five key performances from across the weekend. 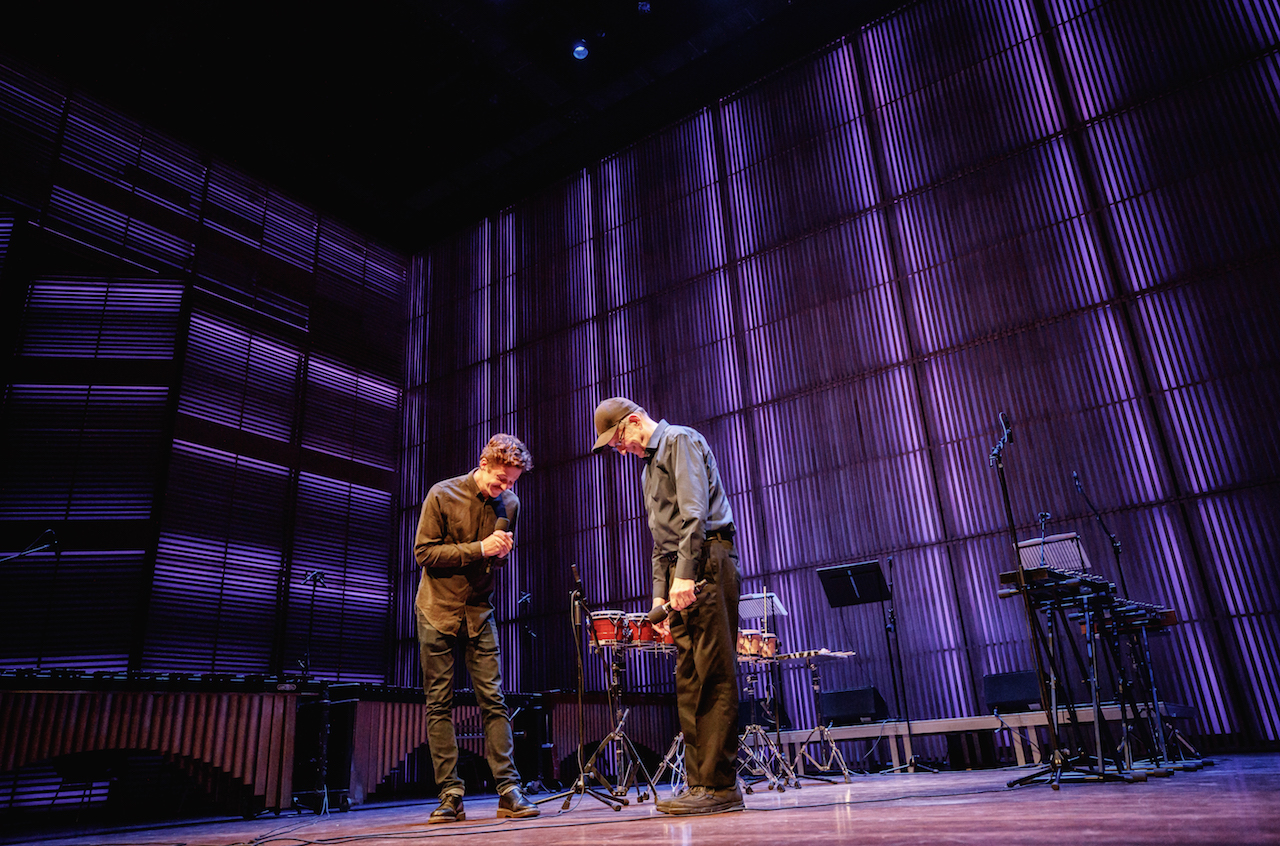 Dekmantel’s series of opening concerts is fast becoming a festival unto itself. Thursday’s lineup was made up almost exclusively of live acts, drawing on Latin and free jazz, post-punk, experimental electronics and more besides. But it was Wednesday evening’s performance of Steve Reich’s work in the Muziekgebouw concert hall that indicated how much Dekmantel has opened itself up in recent years. The American composer helped turn avant-garde music into a popular concern with a style of minimalism full of tonal chords and infectious rhythms. For all its complexity, it’s accessible stuff that continues to gain fans who might otherwise have zero interest in so-called classical music. Wednesday’s audience spanned a wide range of ages, and when Reich himself took the stage to perform Clapping, accompanied by a member of the Dutch percussion ensemble Slagwerk Den Haag, the warmth of the crowd’s reaction was palpable. Slagwerk Den Haag went on to perform Mallet Quartet and Music For Mallet Instruments, Voices And Organ with gusto, layering marimbas, metallophones and glockenspiels with crystalline voices that seemed to emerge out of the clouds of harmonics created by the percussion. During Drumming‘s 90-minute runtime, various audience members could be seen bobbing their heads to different rhythms while the sounds of twinkling glockenspiels chimed like jewels tumbling down a spiral staircase. 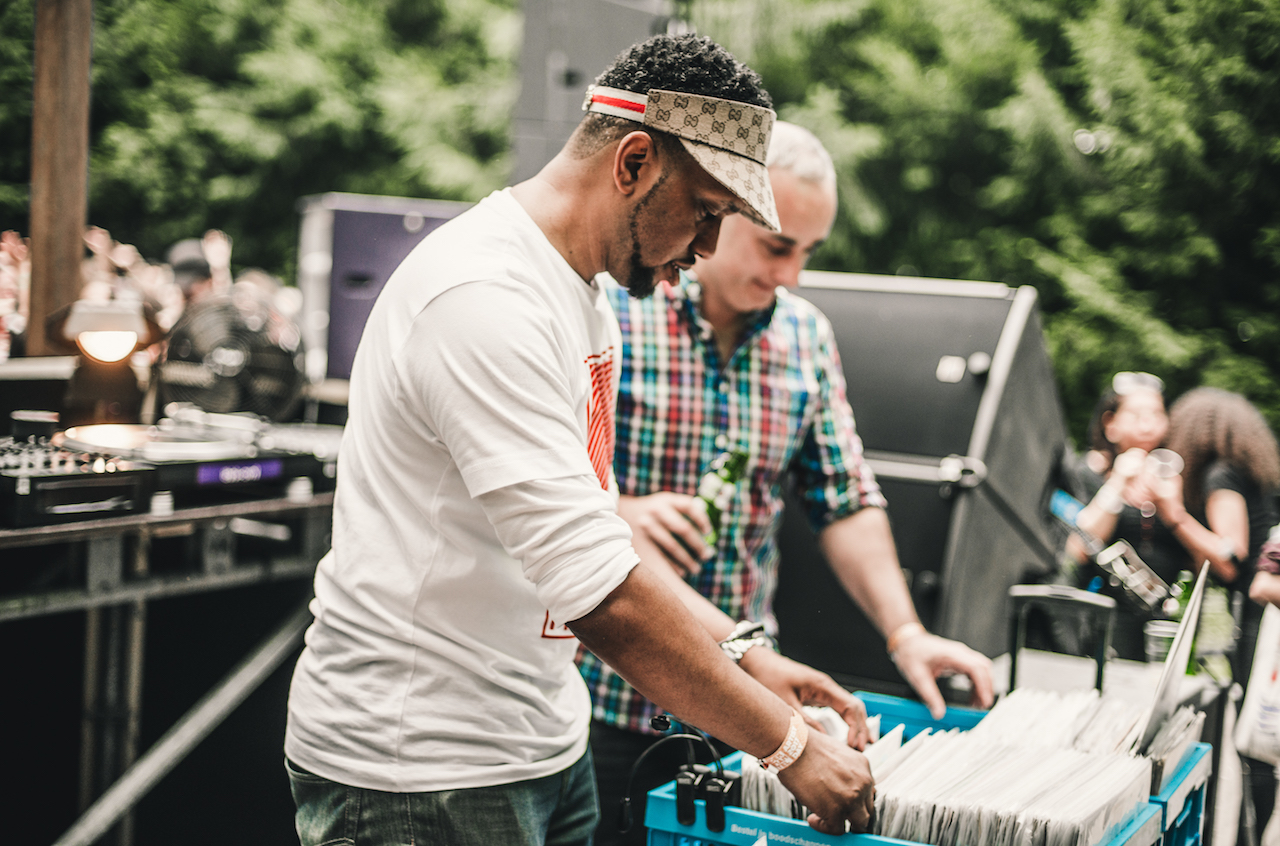 The Selectors stage was central to the success of Dekmantel in 2017. Some of the festival’s biggest names opened here, fizzing the party into life in fine style. Red Greg and Ge-ology’s back-to-back on Friday was one of the highlights. The two DJs have very different backgrounds: Ge-ology has roots in New York’s hip-hop scene while Red Greg has ties to the UK’s soul movement. They hadn’t met before their set, though you’d never have guessed from the way they played. Their shared love of disco and boogie seemed to be perfectly in tune. Ge-ology dropped Webster Lewis’s “There’s A Happy Feeling,” an obscure jazz-funk record that Red Greg’s made his own via a personal re-edit. It was just one of many moments that showed the sensitivity each had for the other’s style.

From there, the pair traded tracks, favouring music that was obscure but irresistibly danceable. The music spanned decades and continents, and it always had an air of positivity that kept people smiling. It’s hard to say exactly how they did it, but there also seemed to be a bit of magic in way they EQ’d the mixer. Each record buzzed with energy, with the low-end sounding loud though never overpowering. As the set progressed, Ge-ology switched from disco to acid house, playing one track backwards for its duration. (It’s a trick directly inspired by Chicago house pioneer Ron Hardy, and one Ge-ology often deploys.) Just as the record started to really mess with people’s heads, Red Greg stepped up and slammed in a perfectly-pitched disco banger, sending fists pumping toward the sky. 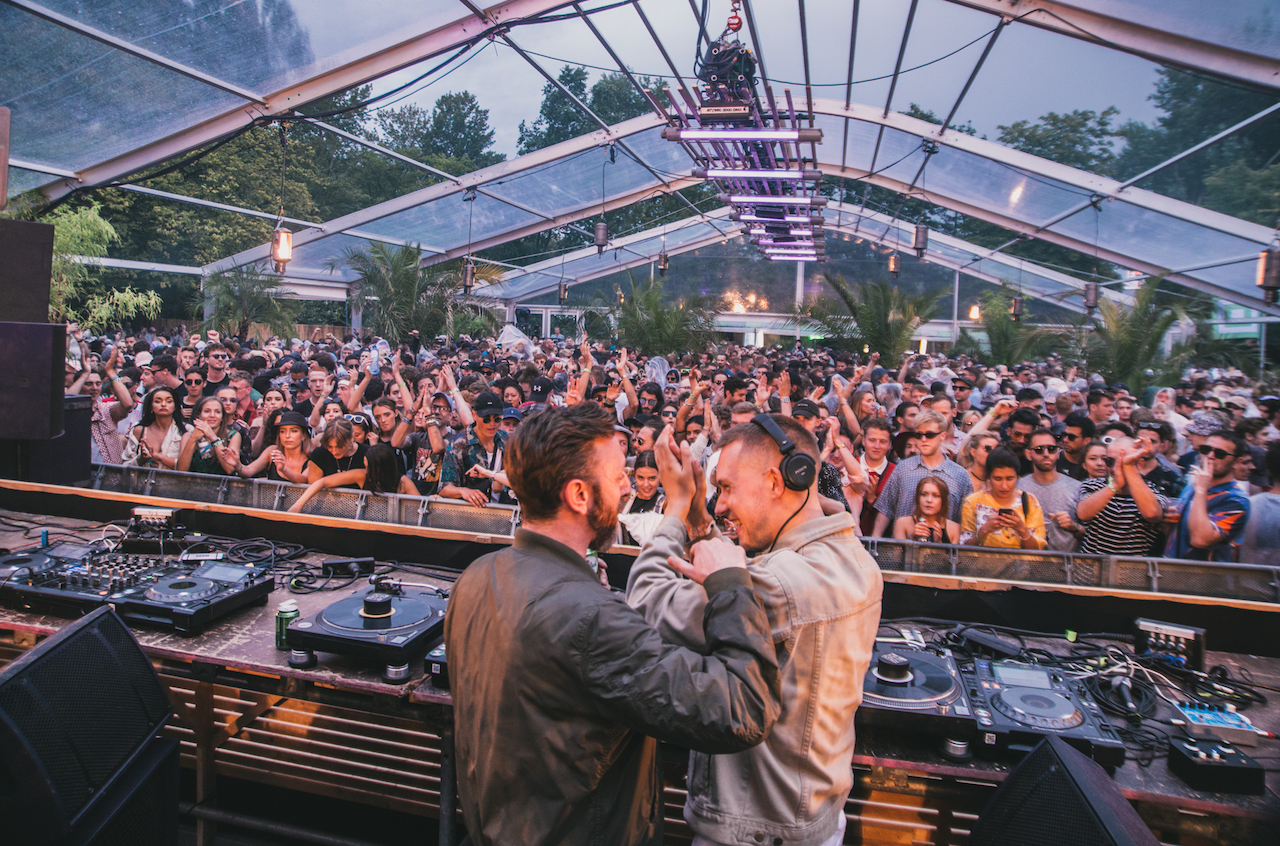 Joy Orbison and Jon K’s back-to-back set in the Greenhouse soundtracked one of those festival moments where everything just clicks. The crowd, their edges smoothed by a day or two of partying, were in a state of relaxed fluidity—strangers mingled with each other, bottles of poppers were passed around, people’s dance moves became increasingly silly. They were being egged on by a two-and-half hour set that started slowly and ended in chaos.

The size of the Greenhouse, a partly enclosed space with ample natural light, lots of plants and raised areas beside the decks, means DJs can generally play deeper and weirder, something Joy Orbison and Jon K seemed to sense. Early on, they built tension through sub-120 BPM tracks with snaking melodies and subtle drums. Around an hour in, as smoke drifted across the stage and men took their tops off, they dropped Theo Parrish & Marcellus Pittman’s “Questions Comments,” a mellow house cut that had no right to work but sounded fantastic. I clocked that one on Shazam at 19:04, and the next ID, at 19:19, was Vybz Kartel’s “Badda Dan Dem,” a dancehall track. This sort of thing became the key feature of the set. You’d return from the toilet and have no clue how they’d got to the track you were hearing. There was classic UK garage (Wookie’s “Down On Me”), classic house (Ron Trent & Chez Damier), some more dancehall (Equiknoxx’s “Fly Away,” Ghetto Vanessa’s “Yuh Live Nice”), ballroom (LSDXOXO’s “Dope Dick Dealer”) and the Babyfather banger “Shook.” I don’t know if Joy Orbison and Jon K have played together before, but it was an inspired set that emphasised some of Dekmantel’s best qualities. 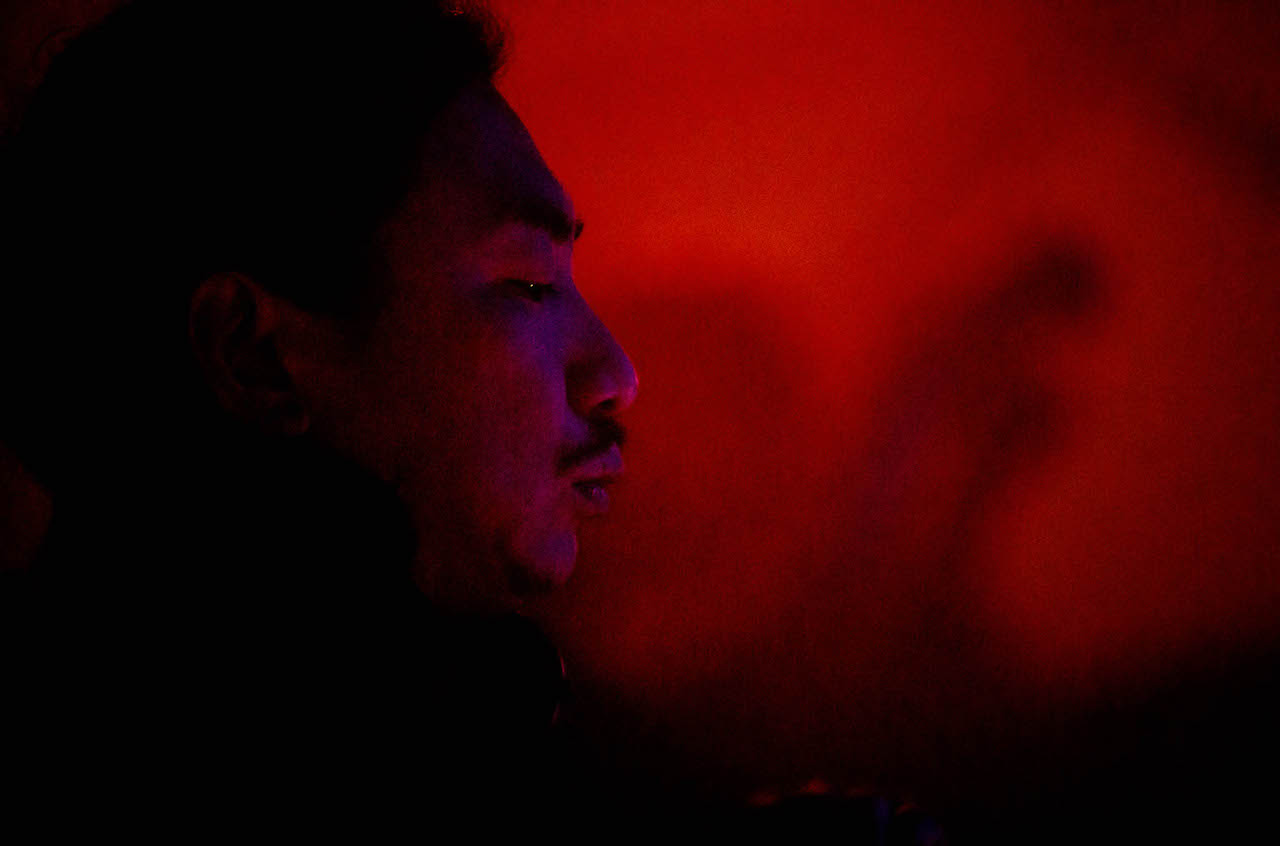 The UFO stage has a very different feel to the other stages at Amsterdamse Bos. While other spots are bathed in sunshine, this is a dark, sweaty techno tent, and in 2017 it felt darker and sweatier than ever before. (Anyone wearing glasses will have experienced their lenses fogging up for several minutes upon entering.) The new lights, suspended in a grid above the huge dance floor, were reminiscent of De School. And unlike most festival stages, the DJ was more or less invisible to the crowd, shrouded in smoky darkness.

Saturday’s programme had a mini-Labyrinth feel to it, with DJ Nobu closing out the stage after a mesmerizing hybrid show from Donato Dozzy and Peter Van Hoesen. From the moment the first kick drum emerged from the crowd’s applause for Dozzy and Van Hoesen, it was clear Nobu had things under control. He kept the energy high, playing hard and fast techno and letting each track breathe before mixing out. Mary Velo’s “Methods” sounded positively enormous, as did the Planetary Assault Systems remix of “Wasps Under A Toy Boat” by Phil Kieran. In the same way that the big-name opening acts earned praise for their early slots, DJ Nobu deserves credit for successfully handling a closing slot. He’s a DJ with a huge amount of range, as comfortable playing marathon parties in tiny listening bars in Tokyo as he is closing out a huge festival tent. At Dekmantel 2017 he was given a challenge, and he rose to it. 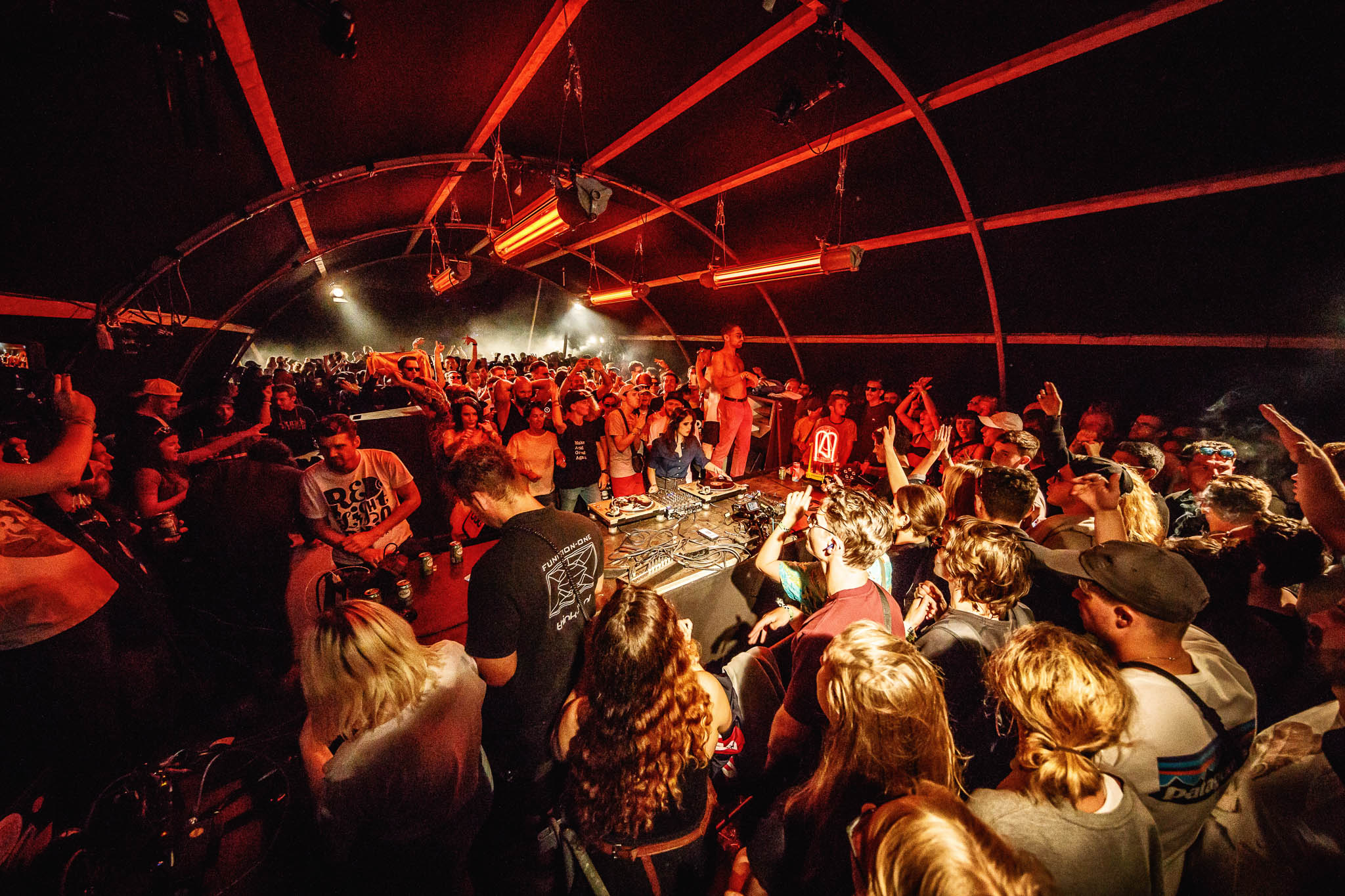 Antal & Hunee, I-F, British Murder Boys or Objekt & Call Super? It wasn’t exactly easy to decide where to finish the weekend. But there was something about Helena Hauff’s closing set at the Boiler Room stage that felt especially tantalising. Hauff is widely regarded as being one of the scene’s in-form DJs. She’s now playing clubs and festivals all over the world, but has retained the uncompromising and idiosyncratic edge that first got her recognised. For its part, Boiler Room is a reliable cauldron of vibes at Dekmantel. The combination of the rickety little barn they use and the fact the party is being filmed seems to crank up the intensity levels.

If Hauff was feeling this intensity, she didn’t show it. The German DJ was a model of composure, quickly and accurately deploying one techno or electro bomb after the next, as limbs flailed in all directions around her. Her selections reflected the reality of the moment: it was the final hour of the festival, and it was time to go for it. Tracks like Thomas Schumacher’s “When I Rock,” paired with the red strip lighting overhead, created a mood that was both sinister and celebratory. As she let the final record play out—a storming electro track Umek made under the name Zeta Reticula back in 2000—Hauff allowed herself to become fully absorbed in the party, tossing her hair from side to side and smiling broadly. Behind her, water bottles sailed through the air and there was at least one person crowd-surfing. Boiler Room’s Michail Stangl got on the microphone and talked about taking the unity and respect everyone had felt across the weekend and applying it to everyday life. It could have come off as corny, but he captured the idea that the best festivals can genuinely feel utopian. 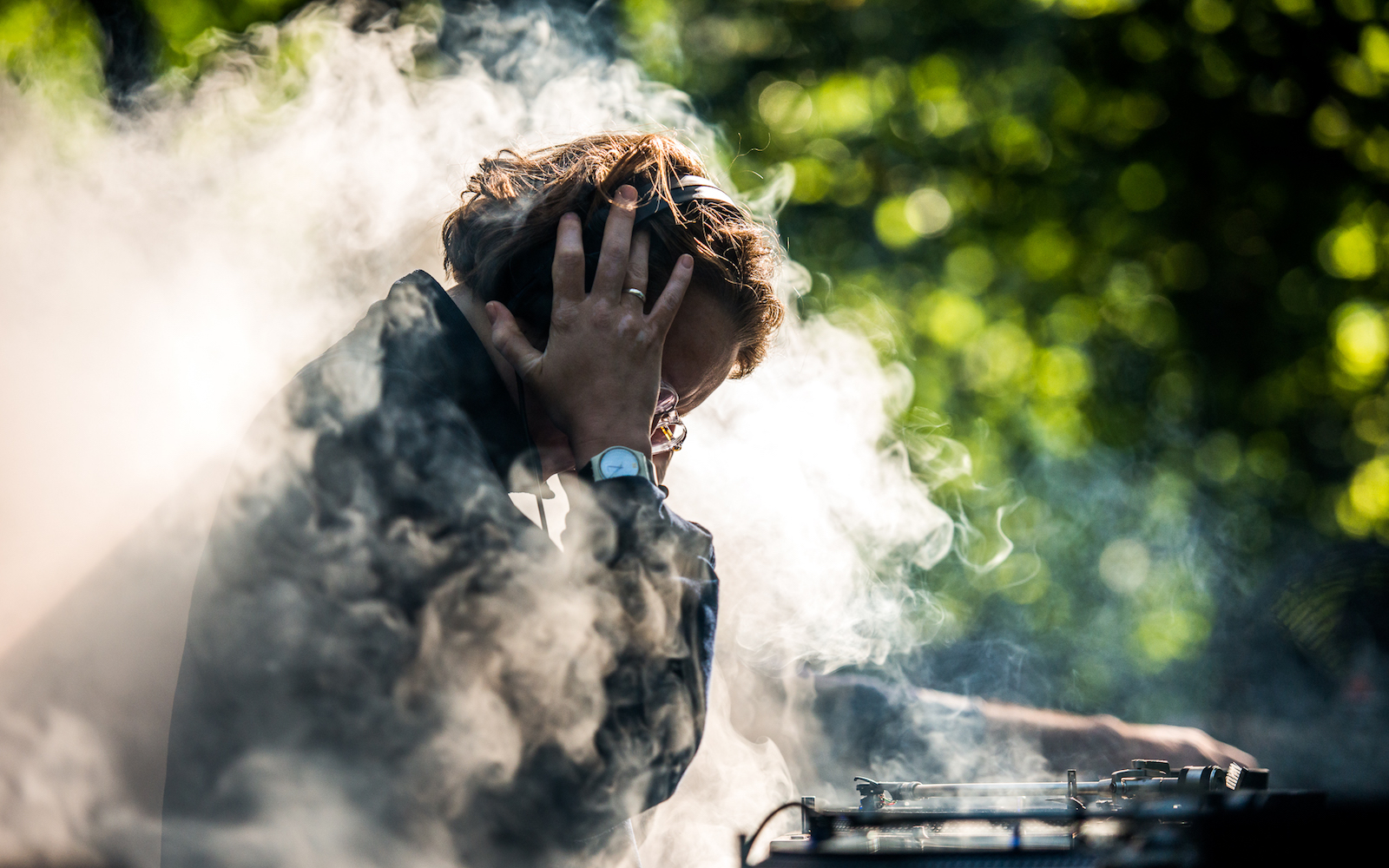