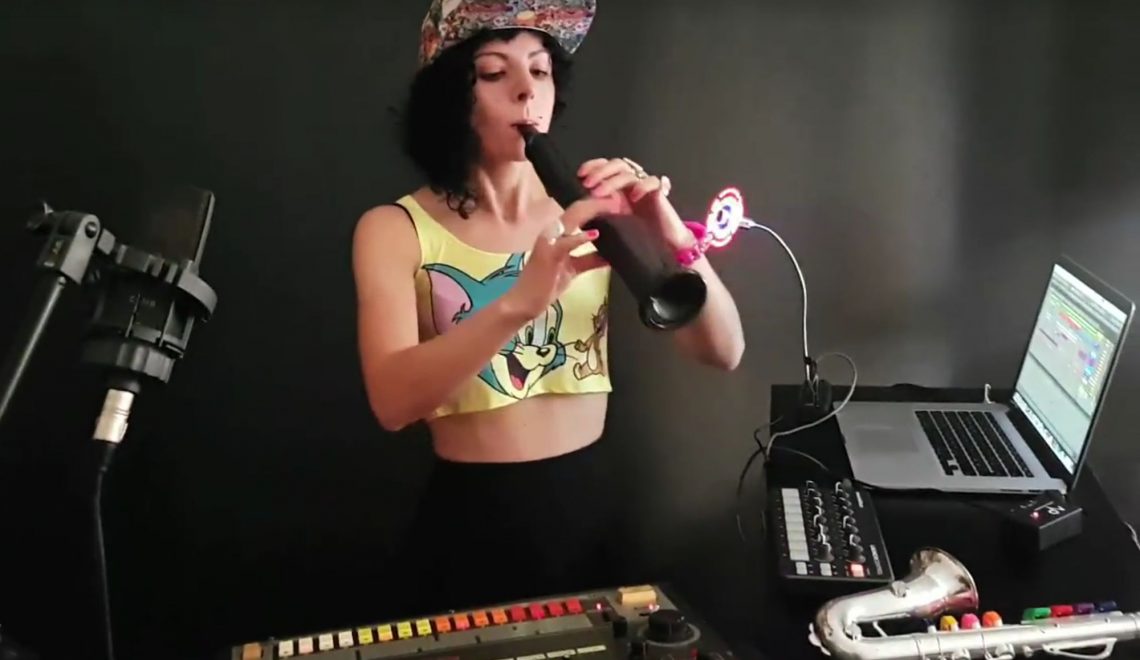 Deviant nights will be taking place at the Drugstore club on the 29th and 30th of June. This mini music festival will showcase Giorgia Angiuli and Betoko as headliners of the first night. Headliners will be supported by JellyForTheBabies  and Phill & Dansmore. Guest stars of the second Deviant night are Christian Loffler and Aril Brikha. 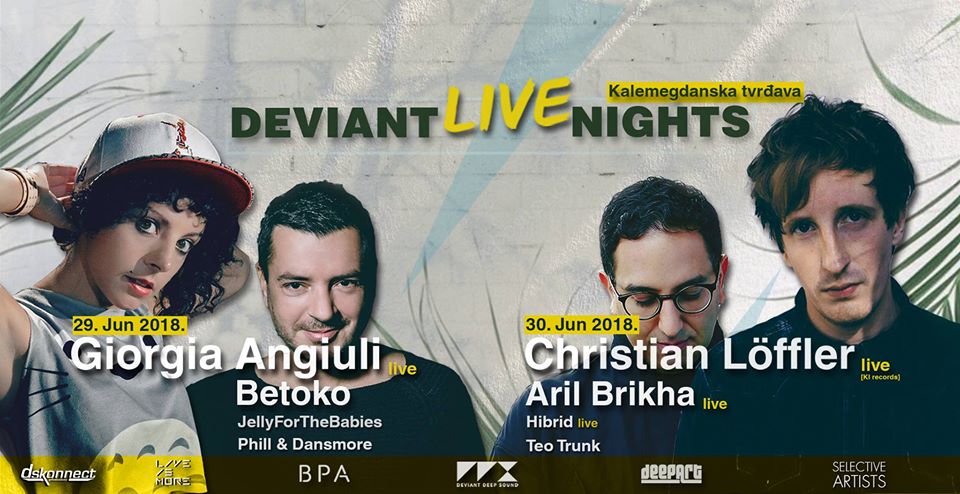 Born in Puglia, also known as the heel of Italy’s boot, Giorgia is a classically trained musician, composer and multi-instrumentalist. Very early on she developed a strong interest for electronic music and started to experiment with new live techniques. From her very first project in 2009 Metùo, where she released the album “Toyshop,” Giorgia has created a vibrant, unique and interactive performance for her fans.

In 2010 with her audio visual project We Love, Giorgia collaborated with the renown label Bpitch Control, performing in clubs internationally allowing her presence to grow which eventually led her to go solo in 2013. The solo project of Giorgia Angiuli stylistically moves between pop, techno and house. She uses her voice to create a dreamy dimension intensified by the use of unique toy instruments. During her set she combines keyboards, drum pad and theremin with the sounds of a toy flute, sax, trumpets and many other toys. Mixing all of these samples and loops she shapes a vibrating and energetic groove that sets the dance floor on fire.

From 2013 to the present Giorgia has had success releasing on some of the biggest labels, Stil vor Talent, Crosstown Rebels, Kindisch, Kevin Saunderson’s legendary techno KMS, Harry Klein, Einmusika, Systematic and Suara to name few. In 2018 her new EP “No Body No Pain” released on Stil Vor Talent.

When it comes to touring the globe, Giorgia is no stranger to the club scene. In 2013 when she began her solo project she started her residency at Tenax Club in Florence, Italy. Since then she has played at some of the most renown clubs in the world including Berghain in Berlin, Rex in Paris, Hive in Zürich, The Egg in London, Harry Klein in Munich, Decadence in Kiev, Studio in Essen, Nox in Madrid, Le Showcase in Paris, Metro in Alicante, Paradiso in Amsterdam, Privilege Ibiza, KaterBlau in Berlin, Sisyphos in Berlin, Watergate in Berlin, Wilde Renate in Berlin, Warung + D-Edge + Beehive + Club 88 in Brazil, Tenax in Florence, Le Bataclan in Paris, Tanzhaus West in Frankfurt, Artel Bessonnica in Moscow and many more.
Oasis in Marrakech, Extrema Outdoor in Belgium, Fort Festival in Tossa/Barcelona, Altavoz in Venice, Elita in Milan, Electrowave in Florence, Fusion in Lärz Germany, Paradise City Festival in Belgium are just some of the festivals she has played over the years.

The start of 2018 saw Giorgia tour in Europe, Australia and South America. She will also hit the European summer festival circuit playing at Aquasella in Asturias Spain, Kappa FuturFestival in Italy, Fusion in Germany, Pleinvrees in Amsterdam, Rock’n Solex Festival in Rennes, Audioriver in Plock, Sueno Open Air in Aix En Provence.As the years have passed Giorgia has increased her profile and visibility with her engaging online presence, it is not wonder every video she posts goes viral receiving thousands or millions of plays. For a small town girl from Puglia, now residing in Florence, this classically trained musician turned live electronic act is just getting started, so sit back and enjoy what’s to come!

Records, his solid productions demonstrate his distinctive style & approach. Described as Tech, minimal, House, the lengthy production catalog Betoko holds up against his name has seen the releases championed & play listed by DJ’s M.A.N.D.Y, Gregor Tresher, Martinez, Steve Lawler, Dubfire, Sven Vath and Marco Carola, to name a few and his tracks have been featured on TV Series like CSI, several Advertising Campaigns and Madonna’s Sticky N Sweet Tour and CD / DVD. Betoko’s embellishment of his music personality gets deeper; now head honcho of his own label, OKO Recordings, he is part of the pioneering evolution of electronic magic adding high quality releases to the worlds track list, supported by some of the globes most highly regarded DJ’s. 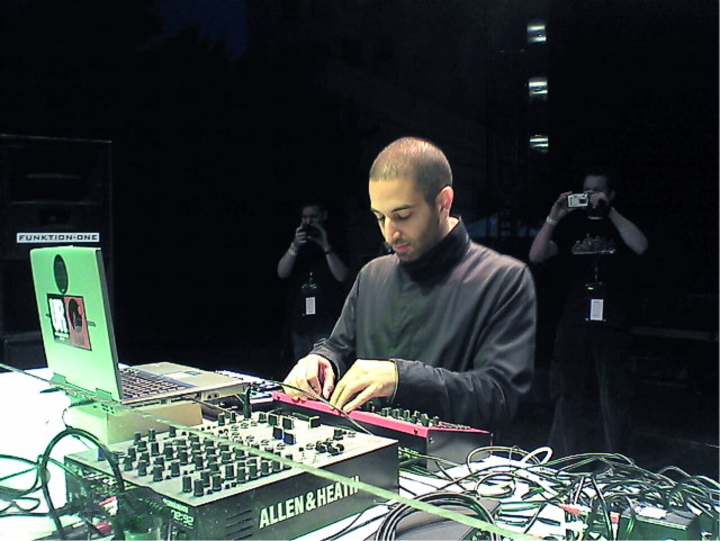 In 1998 Aril Brikha’s ‘Groove La Chord’ crossed generic boundaries. Is it techno? Is it house? Is it deep house? No one was more surprised by the success of the record than Brikha himself – he’d originally presented it on his demo as a potential B-side. It wasn’t until two years after he recorded the track, when Derrick May played it in a club, that he realised it was good.

Brikha disseminated his earliest material on Swedish imprints – Dunkla, Plump, and Placktown – but realizing that his music wasn’t what the local labels were seeking, he looked for fresh outlets – among them Derrick May’s Transmat Records. Transmat contacted Brikha and, as a consequence, his Art Of Vengeance EP (with ‘Groove La Chord’) was issued on its sister label, Fragile, in 1998. A year on, Aril followed it up with the LP Deeparture In Time, a collection of evocative grooves gathered over a six year period and laid down with just one keyboard, a drum machine and an Atari. It drew exultant reviews. Since forging an alliance with Transmat, Brikha has toured solidly with his live show, playing everywhere from the inaugural DEMF (Detroit Electronic Music Festival) to clubs such as London’s Fabric and Tokyo’s Air and Yellow.

Being asked to describe his own music, Christian Loeffler states that he tries to combine melancholy with euphoria. “All my music is connected by a gloomy spirit, which is minted by a warm sincerity. I try to merge all kinds of different acoustic colors to obtain this feeling in my music.”

Loeffler started to play music by the age of 14. Living in a secluded region, lacking a musical surrounding, he had to teach himself the essentials of making electronic music. Before long he developed his own deep and moving sound, colored with a melancholic undertone- Music for the soul & for the body. He recalls a variety of music styles he listened to as a child and teenager that were highly influential to his own development as a musician.

Due to the fact that Loeffler is also working as a visual artist, he’s following the same approach when making music that he’s following when painting or taking photos. It is more about telling a story than making everything accessible right from the start.

In the course of the production of EP’s like “Heights”, “Raise” and “Aspen”, Loeffler developed some strategies to use acoustic material and singing in his music. Amongst others he samples different stringed instruments, percussion and atmospheres. He continues working with the recordings on the computer, combining, layering and alternating them.

The extraordinary capacities of this young producer have kept eyes and ears closely following the fresh talent as Loeffler’s deep moving melancholic sound, is absolutely irresistible.