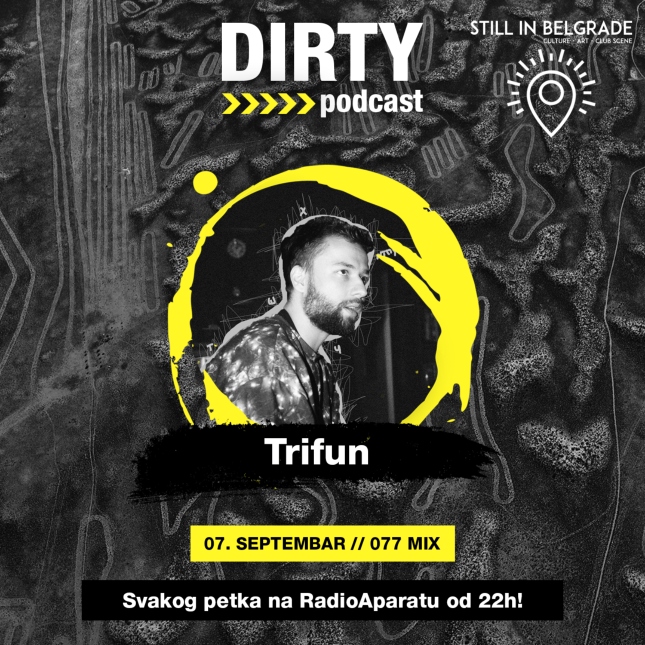 Dirty podcast is broadcast every Friday from 10-11 pm at Radio Aparat. With a special deep, dark & dirty concept, we are promoting underground electronic music.

We proudly present our latest 77th mix for Dirty podcast. Our guest is Aleksandar Trifunović a.k.a Trifun, a young DJ and producer from Belgrade. He has signed for Lampshade media for his modern house releases, but as a DJ he is trying to bring to light some of the artists who might have skipped your radar, from their mainly underground heritage -from UK grime to heavy techno drums. He’s also a co-founder of Plugged_in Livestream events, a project that connects venues, bars, and captivating Belgrade hideouts with local music acts.

You are studying production at Faculty of Dramatic Arts. How do you connect your passion for film and music?

Making music has some kind of spontaneity and abstraction which is really hard to achieve on film. On the other hand visual mediums have multiple dimensions of perspective. In that sense you can say that they complement each other as art forms and to me, combining them is really important, and thus I also direct my own videos. This mix particularly has a sequence about love taken from one of my favorite Jean Luc Godard films called Alphaville, also famous Ljuba Tadić monologue on life after death in The Apology of Socrates, and some interesting thoughts on happiness from Slavoj Žižek, on anger by Basquiat and space travel by Josip Broz Tito. It’s also important not to make it boring. I love to say that if music is my wife, film is my mistress. As Lacan put it, if you lose the mistress, you often lose the wife too.

Since your background is in live performances with bands, how did you actually become a DJ?

Well, the progression came quite unexpectedly, to be honest. As an educated musician and band mate, I was very skeptical about it at first. What do they actually do, is it all at the push of a button? Maybe that was my inner disagreeableness with the whole DJ bandwagon that everyone was jumping on, I don’t know. All I know is, sometime after my primary school I bought a loop pedal for my guitar and started experimenting with it. It opened a whole new world for me, I found something really interesting in repetition as an expression. Along came genres like techno and house, which showed me the way of mixing tracks, and the only thing left for me to do was to get the equipment and start doing it. My longtime band mate once said that our taste was constantly evolving, that we needed something new from time to time. Maybe I can say that for myself. Also, there is a performing part to it…

Tell us about your own music production? Which projects are most important to you?

I have a deep house, low-fi and downtempo/experimental projects.  Also, I mix genres all the time, so my DJ sets are quite different to what I make personally. Now I have to quote the papa Gerd Janson himself: talking about your music is like laughing at your own joke. It’s always hard for me, so I’m just gonna stick to playing it and name them here:

You also promote music through Plugged_in, do you have some interesting plans for the future?

Plugged_in is a promising platform for live-streaming DJ performances. When we came up with the idea, there was no one really doing it here on a regular basis, and we were really stoked about it. Our goal was to promote new captivating places in Belgrade that capture Belgrade’s spirit, as-well as music artists that, to our opinion, represent the sound of our city. Now, a year after, we’ve done almost 30 sessions and a big foreign book (DEMUJA). As tough as it is to make any cultural progress or influence here, we are still trying to keep at it and search for a partnership which would help us grow and become more of a household name, since we believe this has potential. Our plans for the future stay relatively same – continuity, consistency and great content! And in the near future we might do a session with someone special. Let’s just say it’s someone you know really well…