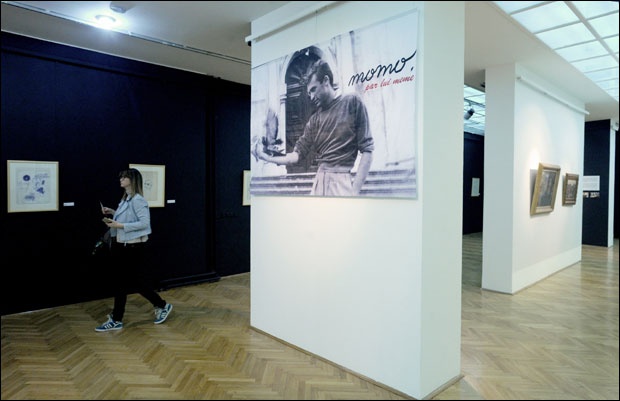 The exhibition “Momo, par lui-même” was opened at the Great Gallery of the Central Military Club on the occasion of 80 years since the birth of the famous Serbian writer and painter Momo Kapor.

In his address, the Minister of Culture and Information Vladan Vukosavljevic drew attention to the renaissance nature of Kapor’s talent noticing how hard is to enumerate all of Kapor’s interests.

“He was a journalist, travel writer, essayist, screenwriter, painter, writer, everything that one could practically be in a complex interweaving of cultural activities of a time and an era he lived in. Momo Kapor was a man of many talents, but everything that he had done, he colored with special spirit and gilded everything he touched”, the Minister said.

He also said that Kapor was opening the doors, getting us acquainted with the West when we needed it, bringing the spirit of New York to our Belgrade, along with the breath of world metropolises.

“It is hard to become a characteristic symbol of a metropolis in cities like Belgrade; Jacques Prévert may have become that in Paris, in Belgrade, it was undoubtedly Momo Kapor”, the Minister said. 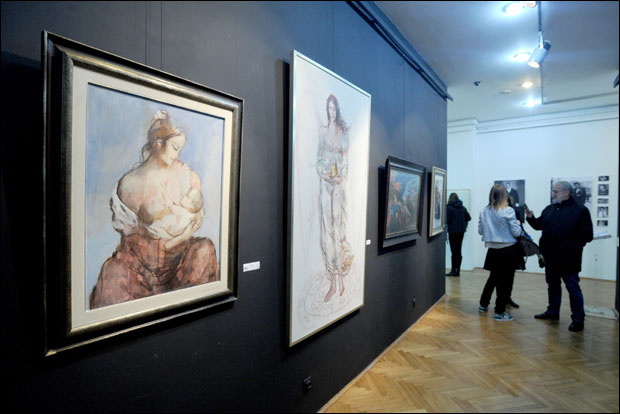 Ljiljana Kapor noted that “by writing about others and painting others, Momo bequeathed to every attentive eye his entire biography, never published – his view of life, people, and time.”

“The fragments of a string he was writing about himself through his dedications of books of known and unknown readers, keeping photographs that had a deeply hidden meaning for him, and items to which he added sentimental value, this exhibition is making available for others to see”, Kapor said.

According to her, the conceptual framework of the exhibition is also determined by the geographic space within which the personal history of painter and writer Momo Kapor was inscribed.

“The exhibition reflects rich and dynamic life he led in, for him, the most important geographic and semantic toponyms: Sarajevo, Belgrade, New York. Actually, these three cities clearly stand out by thematic complexes of the exhibition. Sarajevo is related to his childhood, Belgrade to his growing up and studying at the Academy of Arts, while New York, with its free and creative spirit, was a measure of determining Momo’s own liberties”, she explained.

As she added, the rarities of this exhibition are the childhood photographs and those of his parents, as well as a series of personal documents never publicly exhibited before.

The exhibition is conceived as a kind of documentary and art travelogue through life of Momo Kapor and is based on the monograph of the same name published in 2008 whose author was Kapor, and whose title comes from the phrase “par lui-même” meaning “by himself”.

The exhibition of more than 30 drawings and oil paintings from the early phase of Kapor’s painting during his studies at the Academy of Arts in Belgrade and more than 50 photographs and personal documents from the archive of the Endowment “Momcilo Momo Kapor” will be open to public until April 27.