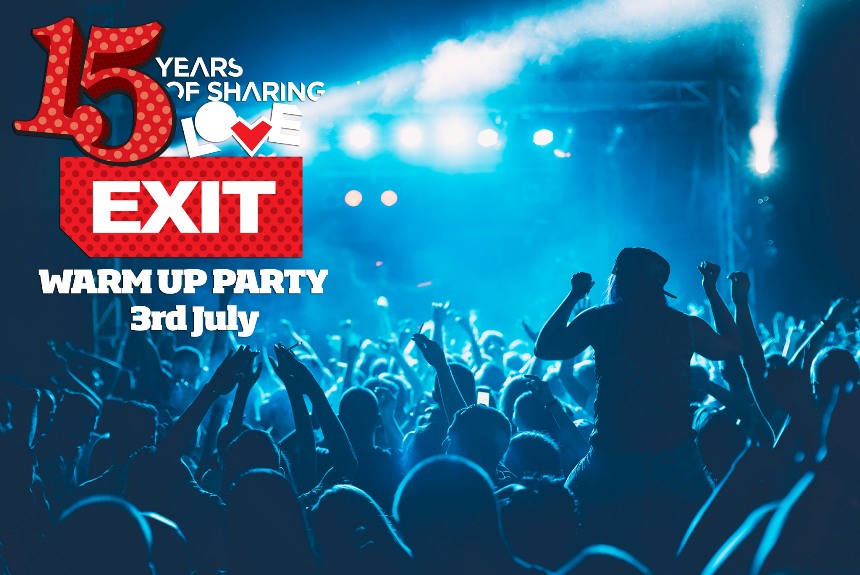 This Friday a big surprise is expecting you at Banging Summer Arena! Belgrade Banging in cooperation with EXIT festival has prepared a big Warm-Up party for EXIT Adventure, that starts next week! Over 2000 people will gather under the open sky at Savamala on 3rd of July. Prepare for the best party time this weekend offers, prepared by festival EXIT and party brand in Serbia, Belgrade Banging.

Banging Summer Arena will be the host of EXIT festival, which will convey it’s energy and atmosphere to Mostarska 5 street.

The biggest summer Adventure made out of two festivals in two countries starts with the award-winning legendary EXIT Festival in Novi Sad, held at the magical Petrovaradin fortress, hosting 20+ stages with more than 500 performers from 9-12th of July. After it’s 4 day and night constant party, EXIT Adventure will move itself south to beautiful seaside in neighboring Montenegro for another massive festivity. SEA DANCE Festival, held from 15-18th of July, is located at Jazz Beach, one of the most beautiful beaches of Mediterranean.

At this year’s European Festival Awards 2014 ceremony, this seaside chapter of EXIT Adventure, has been named the Best European Medium-Sized Festival joining the company of previously awarded EXIT Festival which won the Grand Prix in 2013 and is second ranked Major European Festival in 2014!

Warm-Up for the biggest festival experience starts at 11 p.m. and some of the best domestic dubstep performers will present themselves: Rebel B Bass Codon, Toprek and Damian Selecta. Rebel B is an electronic music producer and DJ from Belgrade, that has many releases for international labels in his biography. He founded an international music brand Balkan Dubstep Unit and shared the stage with colleagues such as Caspa, Teddy Killerz, Tes la Rok, The Bug, Billain.Toprekis an electronic music producer that started his career as a trance producer and part of the Alternative Control duo. He has many releases and id one of the honored members of Balkan Dubstep Unit. Damian Selecta is a dubstep DJ from Belgrade. He cooperated with the most of domestic DJs such as: Rahmanee, Rebel B, Codex, Billain and many others.

Prepare to dance all night long! The entrance for the official EXIT Warm-Up Party organized by Belgrade Banging costs 200 rsd, and after 1 a.m. 300 rsd.