Gareth Pugh-Fashion Genius from the other Universe 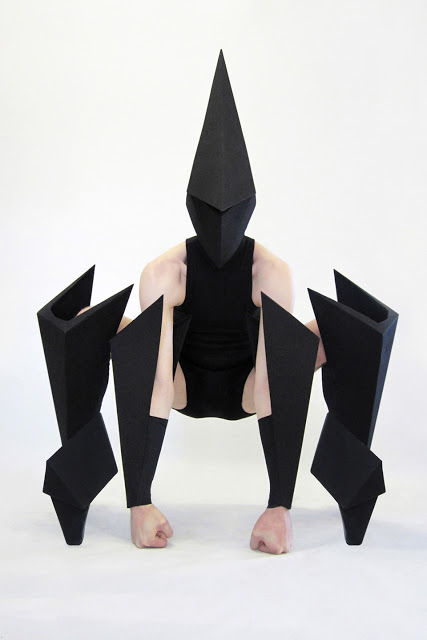 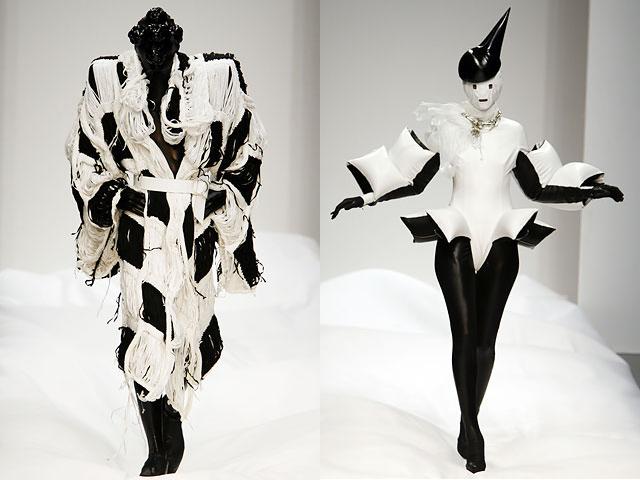 “Cyber-freaky performances in rubber masks and balloons is largely responsible for the return of excitement in the city”. In these words famous Vogue honored the upcoming show of the newcomer Gareth Pugh shortly after he stepped into the London fashion scene in his previously unseen design that left no one indifferent. Almost always using gray, black and white, Pugh’s models are oversized, do not follow the body line,  but create some new alien and fabricated silhouettes that resemble space-age time or fit into a theater with a futuristic vision. “Ready to wear” has never been a part of his fashion pursuits. Young Gareth is one of those designers that fashion connoisseurs either adore or hate. When you see the walking model on the runway dressed into jumpsuit which resembles a giant poodle who has just left the dog salon, and whose ears are made of inflated condoms, you will probably not dismiss and comment: sucks. Does Pugh shock and push the boundaries because it’s amusing or it comes naturally ?! It is true that from the very beginning Pugh has remained loyal to his vision and aesthetics, which describes itself as “a game of contrasts, duality, masculine and feminine, rough and gentle, as a struggle between light and darkness”. Predominance in order, he says, women’s clothing, but often he shows his fashion on a male models, not because of any subversive or pushing the limits of sex differences, but  for one simple reason: male models are cheaper. 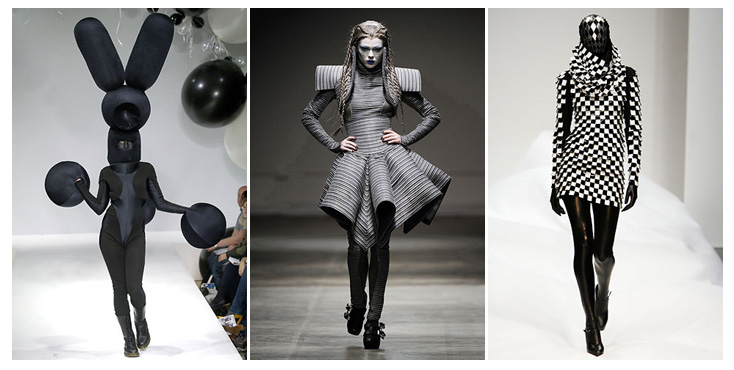 As much as his present confidence and  almost stubborn stay in this twisted “Haute Couture” world looks fabulous , the path to recognition and penetration in the fashion scene was anything but a fairy tale. He studied at London’s Saint Martins, as well as Galliano and McQueen, with whom he often compared, Pugh design visionary decided to immediately start building his own fortress of fashion no matter how much  time he had, neither money, nor assistants or studio. Nonetheless, he decided to oppose the statement of one of his professors that he will never forget: “Do not think that you will be fashion designers soon as you leave school, because you will not. Do you know why the final collection is called like that? For the good reason, because  its going to be probably your last”.

Newcomer with a burning enthusiasm and playful imagination denied professor statement. He joined the creative artistic community named Wowow, which was located in abandoned London warehouse and soon became a formidable force on the underground scene still retaining  with a distinctive touch of glamour. “It was an opportunity to invest in something we believe, and not unpaid internships that eventually break off piece by piece of our soul”, said the young artist Matthew Stone, who become a great Pugh’s friend and since then composed music for Pugh’s fashion shows and films.

The young designer in the warehouse worked day and night until he was invited to present the collection at the London Alternative Fashion Week. The challenge was accepted even he made all models for only four weeks without any assistant, studies and virtually no money. The collection have already contained detectable Pugh expression, clothing is not formed, models were deformed, and the show was like no other. The voice about the new talent spread throughout  London, and soon this eccentric designer shines on the cover of the magazine Dazed & Confused. When he finally made his debut on the big London Fashion Week even “the cold as ice” Anna Wintour praised the newcomer everywhere.  Despite the positive reviews that circulated in the fashion circles, collection didn’t make greater commercial success. All this time, “strange genius’ Gareth fought bravely for his fashion vision – the title which he was so often worshiped, but  it had not led to any sold piece. Nevertheless, he did not want to obey the demands of the market and start to design a “ready to wear” clothing. But as it usually happens only in fictional and overly romanticized stories the persistent Pugh finally struck hard  and earned 120,000 pounds sponsored by the French government, as well as brands such as Yves Saint Laurent and Swarovski, the creative genius of a young newcomer was awarded with a generous sum for the promotion and development of fashion and art. Doors to Paris were wide open.

“Now I am finally able to do what I love to do, and it’s designing clothes. Without worrying about whether someone might want to pay or not, ” he said before leaving the capital of fashion. Unlike London who loves imaginative newcomers, open to experimentation, Paris was different. In Paris you need to deserve the title of the  ‘real’ designer and Pugh needed to prove that on the runaway. He continued to flirt with a costume that resembles a suit of an alien heroes.  Don’t expect to ever see any of his models made of PVC, latex or rubber balloons on  a girl from the neighborhood. 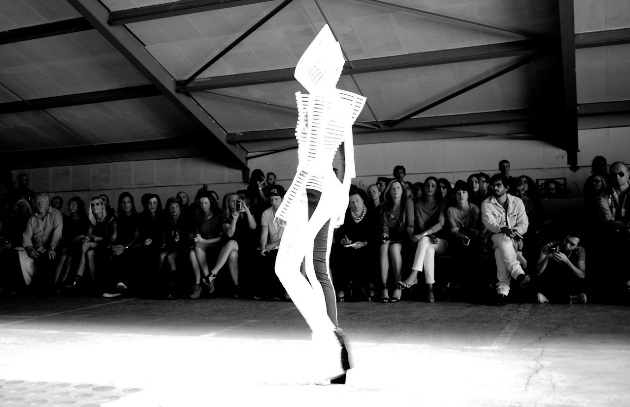 Gareth Pugh is a designer for the stage. “His personal vision takes you on a journey into a different, unknown space” , said one of his associates. No matter how much popularity, money and influence he had, Pugh will probably never give up his personal signature, ways of looking at design and personal vision of the world. “What I do goes far beyond just clothes. I want what is deepest inside and screams and comes to the surface. I wouldn’t call it anything therapeutic, much of it is more of a conscious action “, said eccentric designer about his work.