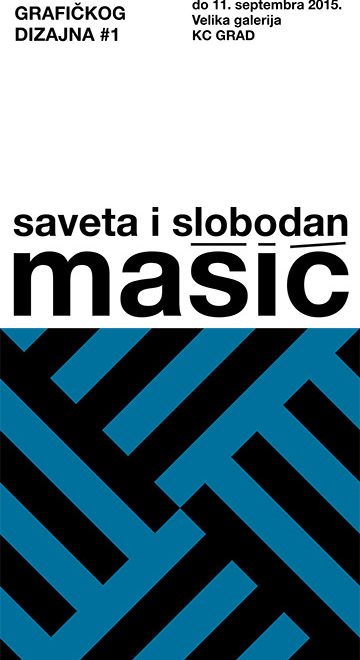 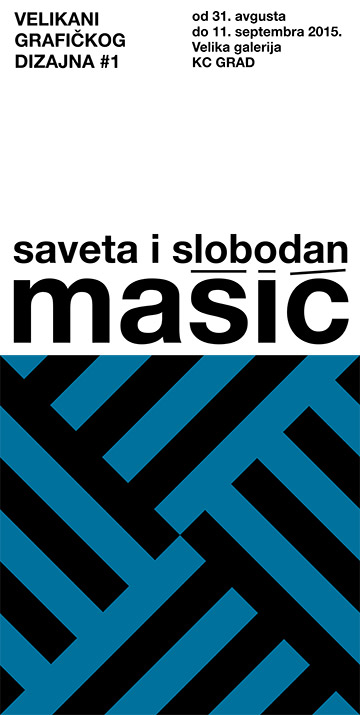 After the summer break, the exhibiting season of 2015 begins with a special project regarding the graphic artist who has founded and visually shaped our past. The project, titled The Giants of Graphic Design will be centered around one exhibition a year, as regards this influential artist in the field of graphic design. The first two, very important personages are Saveta and Slobodan Mašić, whose graphic design posters are to be exhibited.

Slobodan Masic was born in 1939. After graduating from the Faculty of Architecture in Belgrade in 1966 he established an alternative publishing label “Nezavisna izdanja” (Independent publications) with the famous painter Leonid Šeika, and a poet Marija Čudina. Two years later, he established his famous Structure Studio- studio for graphic and architectural design (with Saveta Masić, Dragos Kalajić and Bora Ćosić).
He was an active participant in the 1968 student events, as a graphic editor of the leftist magazine “Susret” (Meeting). He confirms the diversity of his creative personality in graphic design, film and theater, set design, publishing, promotion, literature and essays.

Studio Structure always had a very distinctive opus characterized by skilful management of all the elements of visual communication. From modernist beginnings, minimalist and rational typography, “international” style, geometric system, and the use of semantic signs to the skillful playing around with stylistic elements of the second half of the last century, op-art, pop art, postmodernism…Highly sensitive and well thought-out use of photos, the inclusion of the photographer as an equal participant in the creative process gave rise to a series of posters for BITEF Festival, probably the most complete and compact series of works in Serbian graphic design in the 20th century.
Whatever they are “playing” with: text, graphics, images, or photographs, the work of Saveta and Slobodan Masić are always recognizable and always Idiosyncratically theirs

In the course of four decades of their work in the area of ​​free publishing, experiencing some of his books being prosecuted, Mašić released a few hundred editions in several hundred thousand copies. His work exhibited in solo exhibitions in Belgrade (Museum of Applied Arts and Museum of Contemporary Art, 1973), the Venice Biennale (1972) and in group exhibitions in Warsaw, Toyama (Japan), Colorado Springs, Kiel, Brno, Stuttgart, Paris, Ljubljana, Zagreb etc. He was awarded the Biennale in Brno (1975), the October Salon Award (1971), two Gold Medals BIO in Ljubljana, award “Sterija” Theatre Festival, two Grand Prix May Salon in Belgrade, Special Prize of the First Biennial of Stage Design (1997) and others. Since 1966, he has enjoyed a status of an independent artist at ULUPUDS. He has been a Member of the Serbian Academy of Architecture, in which he was the Vice President, and a member of its Council from its founding in 1995.

The opening of the exhibition is scheduled for Monday, August 31, at 8 pm.