Zemun, a city within a city.  For the  locals  it represents a town in its own right, and for the Belgradians it is viewed as  part of the city of Belgrade.  Zemun is actually one of Belgrade’s most culturally significant and urbane municipalities.  That atmosphere around Zemun today is an aftermath of its past. Until XIX century, Zemun was a town in the Austrian Empire (Habsburg Monarchy) while Belgrade was  under the Ottomans, which explains  why cultural differences  have survived between the two. Zemun has evolved from a commercial town that sat on the bordercross between the Turkish and Habsburg domains. There seem to prevail picturesque facades and more western-like architecture in the Zemun downtown. But the differences from Belgrade are more than architectural. Zemun has always  been a place  with  multinational and multi-religious merchant community. It used to be the main Customs checkpoint en route  from the East to the West. 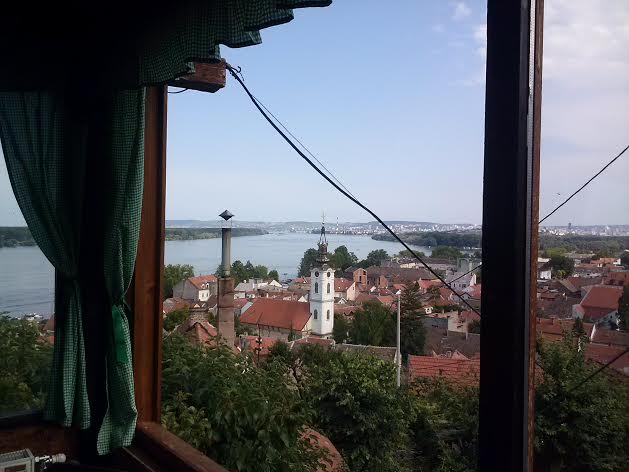 Fat Cat pub is literally placed in the shade of Millenium Tower, on the highest elevated point  of the Gardoš Hill. It is a former fisherman’s club, all made of wood looking somewhat like a mountain hut or a cottage with large windows allowing for the fabulous view. Still, without big changes to the interior, some details typical of pubs are still there, beer remaining its prime focus. I am not a beer drinker myself, but judging from the good reviews made by others, I could say that the range of beers ,is not so  huge, but it’s wisely limited to a few very good ones, so guests will have no difficulty  when it comes to the choice of beers. Fat Cat pub was one of the pioneers in Belgrade introducing several foreign beers. You can try some domestic food here as well. 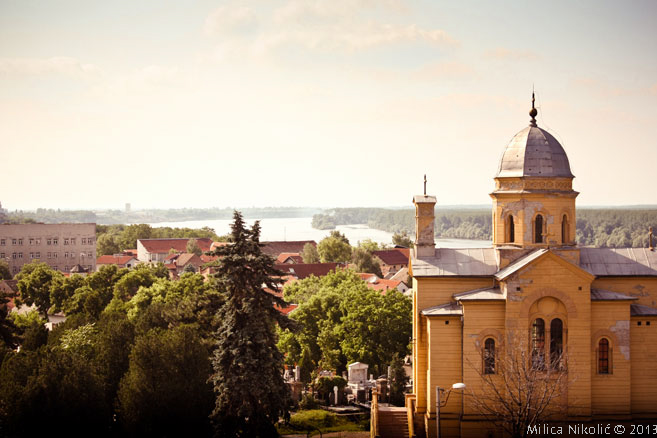 On the opposite side of the pub, exactly on the right side of Millennium tower stands old “communist” restaurant ”Gardoš”. Regrettably, there hasn’t been a huge change since then. Still, you can eat some of the typical domestic dishes like pljeskavica and cevapi … The food is not aggressively priced. One cannot help mentioning that this is a place with a garden and the splendid view.

Spectacular views seem to be  the sales pitch of these two restaurants. Panoramic view onto the townscape roofs of old bungalow houses of Zemun, churches, the Danube, the Lido island, post war white skyscraper,  if well combined with a  snack, a good beer, rakija or just maybe lemonade this could be the best choice to feel the spirit of Zemun. The Gardoš Hill seems to be  perfect any time of the day.

The Zemun Fortress is the oldest building in Zemun, mentioned early in the 9th century. The now remains date back from the 15th century. The Millenium Tower stands at the centre of the fortress. It was erected by the Hungarian authorities in 1896, when the Hungarians of the Austrian Empire were celebrating a 1000th anniversary of their arrival to  the Pannonian Plains. It was renewed in 1962, and is also known as the tower of Sibinjanin Janko (John Hunyadi).  The Millennium tower provides a spectacular view of the old town of Zemun, the Danube and Kalemegdan Fortress.

En route to Gardoš, and Millennium tower (old part of Zemun) starting from the quay, you will pass by the hidden café Galerija. After entering the cobbled  Sindjeliceva Street turn to  the  right-Veslarska street, and  the minute you see the Danube turn left, and you’ll  find yourself in a petite Galerija’s garden. Small cafeteria/restaurant in an old, typical Zemun house, with a window and door view onto a cobbled lane. Wooden Venetian blinds protect it from Košava wind. Little terrace, with the vine branches overhanging, with only eight to ten tables looking out  onto the “ beautiful blue Danube”, cosseted away into a small lane giving the impression of some small Italian town. Inside the house timber prevails. There is wooden furniture, wine shelves, the ceiling, whereas the walls and floors, the bar , the stairs are made  in well selected brickwork. Natural materials and antiquities –old photos and props, with dim light, glasses of wine and fine jazz simply radiate the romantic atmosphere! Wine cellar (the lower level below ground) is designed for meals whereas the upper one is for drinks. 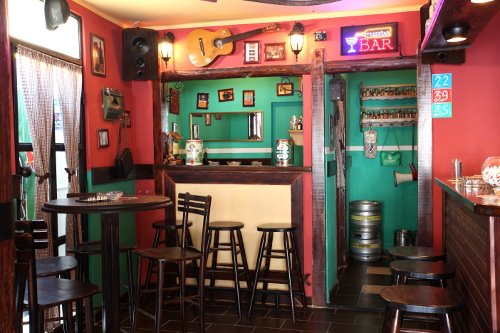 While taking long walks and going sightseeing along the lower Gardoš streets, there is no avoiding Crni Mata Pub with its striking green facade . Crni Mata or Kara Mata is located in Karamatina street, across the old house of the famous Karamata family.  Crni in Serbian, or kara in Turkish means black, and Mata is the man’s name.  It is a typical local pub. This little place is again ideal for drinking beer and rakija with the locals and the regulars (mainly men),  and listening to the live music during the weekends. The green facade and the red interior with old photos, a bar, dim lighting and at times sounds of the guitar and generally quite pleasant  atmosphere  is what makes the identity of this pub. 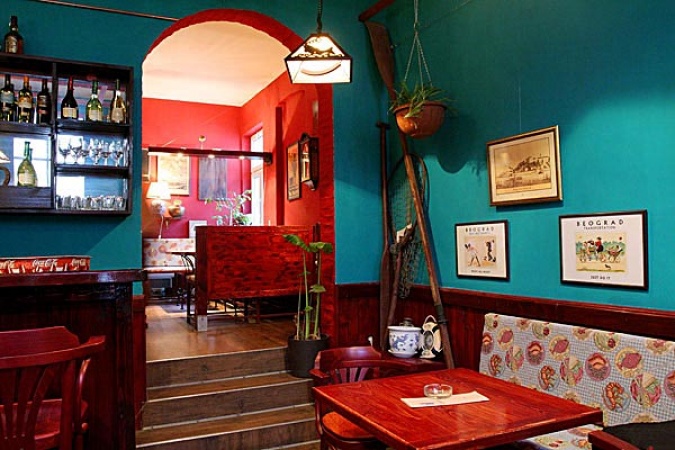 In the lower part of Gardos lies another cute little place called Semlin Art.  It is a cafe gallery. The ambience is not that of high society but  more arty and comfy . Semlin is an alternative German name for Zemun. Semlin Art is a great place for a small or a large company, with a variety of food and wines. Apart from domestic Serbian cuisine, Italian, Mexican, Chinese and Indian cuisine are on the menu in Semlin Art too.  They offer wine from a number of small wineries from all over Serbia. Another great thing about this place is their lovely and very friendly staff.  Sounds of old soul and evergreens are calm and comforting, and at times are mixed with the screech of the local parrot , but nobody seems to mind  the parrot!

Balkan Ekspres is a restaurant placed in the old train waggon. It is located at the top of Gardos neighborhood and there you can eat a delicious meal and then enjoy  an incredible view of the river from the top of the hill. It has a beautiful garden at 50 meters above the Danube, and most of the restaurants looking onto the Danube are designed in large glass top surfaces allowing for a pleasant view of the river any time of the year. Old railway waggon having been converted to this place in 1994 served as the foundation for the construction of the entire restaurant. One can have a meal or a drink inside as well. The location of the restaurant presents the highest point in Srem, and the view from there is simply fantastic! Traffic jams are practically nonexistent, in the part of the city where almost there is no traffic or other noise pollution but the sound of the wind, the  ship’s horn  and sure sounds of the river. Prices are very reasonable.

Kafana Tri ladjara is actually a restaurant. Every Tuesday night is full of people of different age, who come to enjoy live jazz music. Zemun has a longstanding jazz tradition, and its peak was between 1955 and 1965. In this place Yugoslav jazz was born.  It looks like a huge kafana with long tables.  Live jazz session starts at 8 pm and don’t last longer than 22:30. There is a section in Tri ladjara, specially reserved for young people but  It is also probably the only place in town where you’ll see mixed group of people from the early 20s to 80s enjoying the jazzy nights all together. 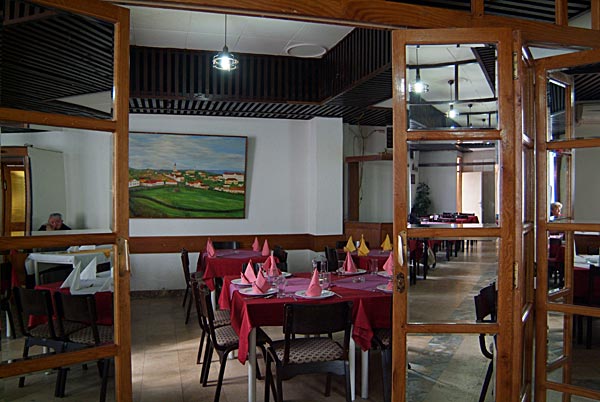 Over the past few years, the jazz Tuesdays have become popular among hipsters from Zemun, and Belgrade. Foreigners seem to like it here too. Having fun while drinking domestic wine, domestic beer and domestic dishes, all at low prices is possible in Tri ladjara. The spirit of the people in their 80s mixed with much  younger ones who all together enjoy live jazz is evident on the dance floor.  Performers are the refined ‘grandpas’ from a Jazz club Zemun, and the dainty dancing grandmas  are all dressed up in the styles from back in the day , with curly hair and red lipstick, while ‘grandpas’  wear  suits and bowties. One does feel young here. To come on time  at  8 pm is your best bet here because ”youth section” seems to be packed at all times. Tri ladjara is settled in the old part of Zemun center. On the opposite side from the pub Crveni rak, and between them is the Zemun market place. Also Tri ladjara is around 50 meters from the Danube. And guess where the party is moving after 22:30;) making a beeline  for Crveni rak!

With its ideal location, next to the Danube, with cobblestone paths, Gardoš and Millennium tower, fishermen’s tales, jazz, potted history and ancient legends and a plethora of cafes and  bars, Zemun is a great place to visit. Another beautiful thing in Zemun is  Great War Island- Lido, Half way there if you swim or sail  the Danube. It is easily visible from the quay especially during summertime people take to swimming in the Danube and to sunbathing on the Lido beach. The sentiment that Zemun is a city within a city is still prevalent today. But to be perfectly honest neither can Belgrade survive without Zemun, nor can Zemun without Belgrade!

A girl from Zemun! 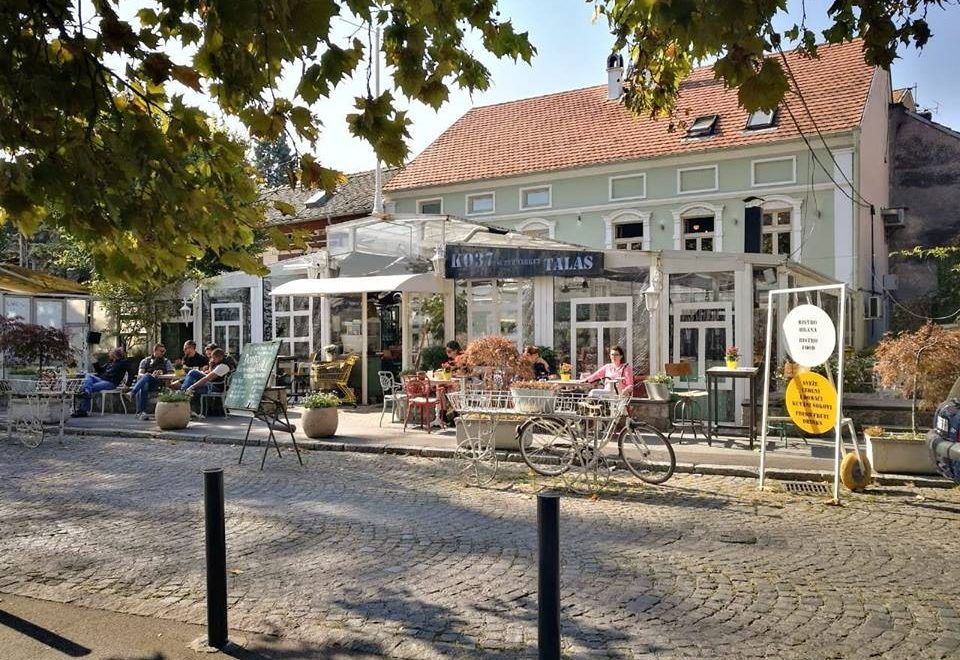 CITY GUIDE, LIVING, SHOPS
A Pocket-Sized Insider’s Guide to the best of Zemun 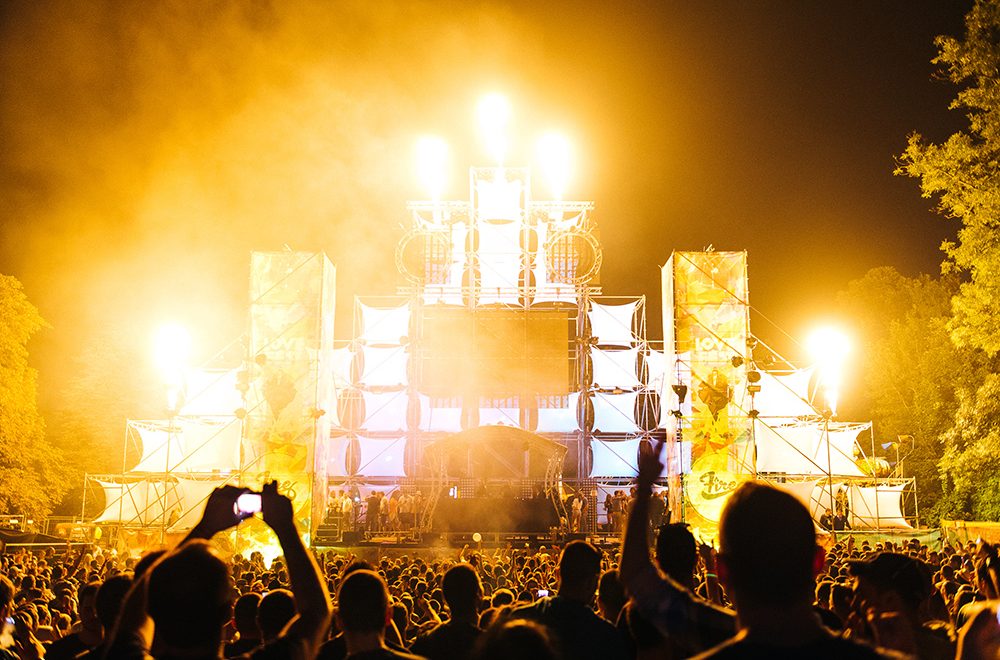