Interview with Frivolous: “Music is definitely about creating a space or snap-shot of emotion” 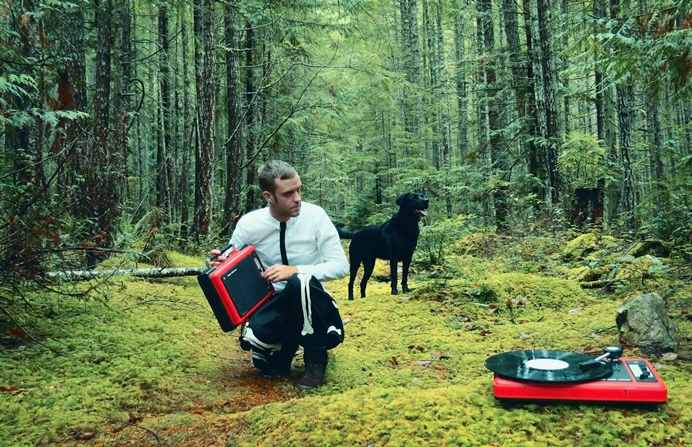 Daniel Gardner is the mic technician, traveler, piano player and electronic musician who has been riding crazy on the wings of his Frivolous project for the last few years. After his first appearance in Serbia at the Mad In Belgrade festival last year, he is flying back and this time we will have a chance to catch him in the more intimate atmosphere of KC Grad. Before he arrives and we turn it into a club, it’s time for virtual coffee and cigarettes.

“Evo, aplauz za ovog simpaticnog mladica…”, do you remember where you chopped this one from? The vocals in the Serbian language that start the break in “Rivers Fate”?

Yeah sure! In English it’s called ‘Black Cat – White Cat’. Fantastic film! I watched it again recently when I showed it to a friend, and actually I enjoyed even more than the last time I saw it.

We see you are on tour again. Are your batteries charged, are you feeling refueled as you love to say? How was it in Berlin and Zurich last weekend?

Big time yes! It was a fantastic weekend, with 2 shows for Lessizmore. Annita Berber, the bar from Dj’s Sammy Dee and Tom Clark in Berlin, and Cafe Gold in Zurich. I was playing a track that I was worried about, but the people were really freaking out, so it really makes me very happy.

Your last year seems like you found the balance between touring and producing music or in this case digging through your older works. Do you finally feel like that after returning to Canada?

Yeah, i feel a huge relief actually. It took some years to get settled there with so many changes including marriage and buying our first house and building a studio. Everything is in good form now, and making music has also a great new inspiration. I guess we will see a couple of new Frivolous EP’s in 2015.

We often see guys getting tired of 120 or even more gigs per year. Some people stop drinking and start running, some don’t go to the BPM Festival and finally work on their album while some are just feeling lost in one way. How did you feel after releasing your “Meteorology” album on Cadenza and started playing almost non-stop for two years, even if it was beside Carl Craig or Robag Wruhme?

Yeah, I drank more, which made it worse. It was truly TOO intense and I definitely lost vision of who I was. So it is a big relief to come back to my self finally, and i will make sure I keep this balance now.

What was your way out? Just leaving Berlin and going to the country-side? Getting in touch with nature and spending more time with your lady?

Yes, and also to move to Canada was a humbling experience. Going back to where I grew up with nobody caring about who I was, or about electronic music at all. Generally Canada is a rock and country – country. Only in the urban areas do they even know about any names of electronic music industry. In this ignorance for good music, I also find myself having a cause to believe in.

You sung “What do I try every night? I try to make some change” on one of your most recognizable tunes. Are you still doing that kind of thing in your studio? Still feeling like a “nomad” or a “rave child” just more wiser as we are growing up?
I would say that I’ve always been a fan of psychology and philosophy, my own, other peoples, and our collective social consciousness. This is a theme that often dominates any lyrics of my songs. Singing about stupid shit often doesn’t move me too much. Sometimes it can be funny. Although I’m called Frivolous, sometimes I’m too serious this way.

Do you have a plan for this new year, after this little Europe tour? You have been talking a lot about finding new directions with the sound. What is occupying your mind?

Yes I was sick of minimal house, but now I am coming back to it after a full cycle of preoccupation with bass-music genres. I didn’t release any of it, and in the end the unnatural rhythms turned be back to the rolling groove i always loved. It’s a kind of re-birth for me these days. Really feeling great!

For those who don’t know, Daniel is also crazy about DIY thing. Are we still going to feel those kind of Sepia emotions in your music or are you going to be total colourish?

Sampling, Field Recording, and Setting up performances with crazy and home-made equipment will always be a major part of what I do. Music is definitely about creating a “space” or snap-shot of emotion. I don’t see that changing, but the experiments with the bass genres really opened up a whole new pallet of tools which I didn’t use much before. Lots of noises and static and for those who know about such things, pitch envelopes which I didn’t use before.

You are playing this Friday at the KC Grad in Belgrade. What are you bringing to your live set? Has the chief knife retired and is the red phone still working?
Red phone just got re-built and is working super great! I was also experimenting with an electric melodica in practice, but I think it will not get used until I can develop it a bit more.

Ok, thanks for this Daniel. I hope you will have a chance to check out our city this time. As I know you love to dig inspiration in vinyl shops. We don’t have many of them, but check “Yugovinyl”. It might be very interesting to you. See you on Friday and enjoy the rest of your tour!

Yeah I have time I’d love to go visit that shop! I guess they would have some amazing records with samples that can’t be found on the internet. Thanks for the tip!

Once again. Friday, the 16th of January at the KC Grad, Belgrade. Frivolous live, support by Kristijan Molnar and Ewox & Tamarinsky. Bring your crazy ties, freaky moves, and dancing shoes.

frivolous liveinterview with frivolous
by Dragana Kostica
Leave a comment