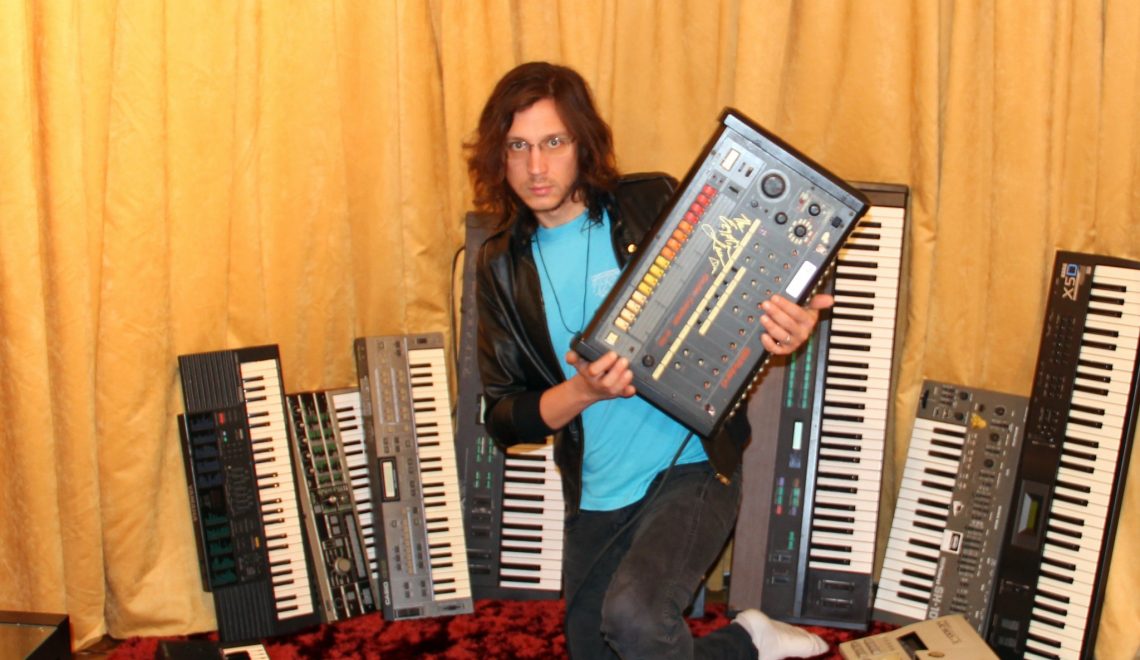 Danny Wolfers is truly one of a kind – a producer and performer who spans many different scenes with ease and always in his own unique style a world away from the usual hype or trends of any given day. What’s more, rarely does a year go by when he doesn’t release an essential album. Most frequently producing as Legowelt, his unique style comes from an unfaltering devotion to hardware, be it old, new or totally knackered.

KC GRAD: We were kind of blackmailed to ask you a question about Belgrade so here it goes. You were in Belgrade before. Last time was in 2004 if I’m correct. Do you find Belgrade a cool spot for UFO sightings? You picked up any UFO stories here?

DW: I was just there for like 12 hours. Flew in and flew out so I didn’t see much.

DW: Yeah there are plans for a new radio show in the future, just waiting for the right time. It will not be called

Astro Unicorn but will have a new name.

KC GRAD: “Zorlex 1 in Tahiti Rainstorm” is one badass video. Specially because of the brilliant Satomi Taniyama track that was released on your Strange Life label. We read some news on Red Bull Music Academy’s website that you closed Strange Life. Can you tell us something more about this decision?

DW: It was taking too much time and it is really boring to run a music label, it made the whole music thing too business-like. You got to deal with complaining artists, people that want you to listen to their demos, people that know what’s good for you. All kinds of bullshit. I don’t want to be a curator or librarian. What am I going to do with all those releases? Put them in a row and look and them and feel good about it? Nah.

I’d rather spend the time focusing and studying music and doing weird projects. I want to have complete freedom without having a concrete block of worries called a label on my eg.

KC GRAD: Are you preparing for the Intergalactic FM top 100 of 2013? I guess you are aware of the new rating system and the at-least-20-tracks-rated rule? What’s the first track you’d lobby for these days?

DW: Well anything that is not Italo or the same shit as always I hope. I like Italo but having Charlie Spacer Woman or Mr.Flagio’s Take a Chance every year in the top 10 is getting a bit boring. We should open up to some new futuristic sounds.

KC GRAD: We organized a poster drawing competition for kids for your performance at Kc Grad. You’re going to be able to see all the originals when you arrive since we’re going to set up a small exhibition on the day of the concert. We were inspired by art competitions from your very own website. A new competition coming anytime soon?

DW: Yes I saw some of the pictures already, they are great! I probably will do something like that in the future again yeah, maybe next year. This year I wanted to do a Text adventure competition where people would have to play a text adventure computer game. The first one who would have finished would have won a prize, but after programming the first 10% I lost interest and figured that nobody would be smart enough to finish it because the puzzles were becoming too weird. The game was about this guy who was going to buy a second hand synthesizer from the ad paper in the English countryside, of course he would end up in this spooky coastal village with no more bus back and end up with some Druid sacrifice cult.

KC GRAD: While we’re talking about your website here’s some news that really got our attention: “SPIRICOM 7 is Pacific Micro International software’s first product – a dimensional occult transiever for the Commodore 64/128 computer on cassette and disk. Make contact with the unseen worlds ghosts & spirits and evoke paranormal activity in your own home! Endless fun for the whole family!!!” Since we’re too scared to try it ourselves can you please share some stories from the people that actually had the balls to use it?

DW: Well you should try it, you only live once! Some people take this very seriously and were traumatized for life, straight ticket to the mental hospital or unleashed a poltergeist in their home, which is not necessarily a bad thing because they can write a book about it then or sell the movie rights and become a millionaire. Why don’t you use it, you can become involved in the Serbian Amityville Horror!

KC GRAD: Did you get any feedback on games you make for Commodore 64? Anyone finished them? Any records set? Any illegal gaming battles going on in wooden huts of Kamchatka?

DW: Yeah many people finished Forest of Loom (a shoot’m up like Commando, Ikari Warriors) and people also finished Trident Crisis (a text adventure about escaping the Iron Curtain in the Cold War).

KC GRAD: We tried to pick up the lyrics for Squadra Blanco’s “The Night Must Fall” but we’re having trouble with that part when one’s probably not even supposed to hear what you’re chanting. Are you willing to give us a hand here and make our lives easier with sharing the full lyrics?

DW: I have no idea. That’s such a long time ago, like 12 years or something. It’s probably about some psychotic serial killer hunting for victims in the night.

KC GRAD: Here’s a short one: Do you have any rituals you enjoy that are non-music related?

DW: Hmmm maybe but I can’t tell u much about it… I got an ancient gargoyle statue in my garden protecting the mansion against evil spirits.

KC GRAD: We here at Kc Grad are total suckers for merchandise. Will you be bringing any t-shirts or stuff?

DW: I can try but I’ll probably forget except if you remind me.

KC GRAD: Everyone’s fully prepared for your gig here at Kc Grad. The technicians know their part, the bar people know their part, the support acts are fully armed… We’re just having trouble explaining to our cleaning ladies how to handle post-earthquake debris you’re about to leave. Have any tips?

DW: Just give them 20 euros extra for the extra cleaning time?

A QUESTION FROM THE AUDIENCE: Dear Legowelt, I’m writing you this question in hope it won’t end up in a bin – Where do you get your clothes?

DW: I mostly buy them in the USA at really ghetto cheap stores like Target or Ross, cause nobody in Europe knows those. But also thrift stores. Japan is really good for weird t-shirts. I have seen the weirdest t-shirt ever there for sale in a second hand store in Harajuku Tokyo. It has a picture of a crying cartoon soldier sitting next to a pink poodle dog and then it said underneath “Vietnam – I am so lonely but I am O.K.” I didn’t buy it cause it was like 50 euros.