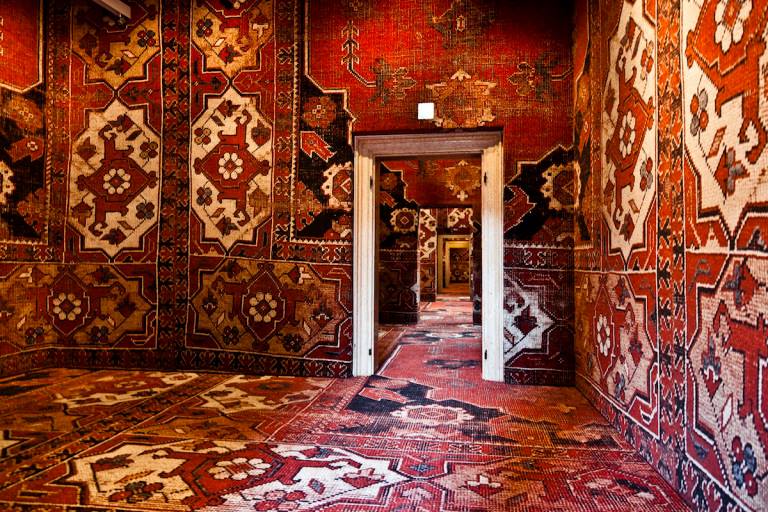 Midnight Orient party is taking place in the KC Grad on the 1st of September. Certified rug driver Sertac Ogul a.k.a. As Smooth As will be playing alongside Noema from Berlin. We used this opportunity to chat a bit with Sertac who is the founder.

Hello Sertac, please introduce yourself to the readers of ’’Still in Belgrade’’?

Hey, I moved to Belgrade almost three years ago, in summer of 2014 because of my master studies. Since then I have been organizing parties, booking DJs and playing music all around.

Can you tell us more about the concept of Midnight Orient Parties?

The concept is the rug.  Good old eastern rugs and the music comes from wherever you can find those rugs. As far as I remember, I think during the 3rd party, I decided to have carpet-shaped posters. I was bit sick of western aesthetic to be honest. Same posters, same lines, same figures – minimal and dull. So far people have reacted very well to our posters and flyers. Nowadays, friends are asking me if they can keep one of the posters after the party ends. I have been told that I should create some series of t-shirts or something like that, we will see.

What kind of music do you play and who are your listeners?

It is contemporary dance music sounds/genres with oriental/ethnic influence in it. We are open to any sound which comes from the places where you can find those rugs under your feet. I can not really specify who our listeners are in terms of age or something specific. It is quite diverse. But I think that’s what makes it unique. Next season me and Dejan want to experiment a little bit more regarding the selection of music. Noema will be our guest for the season’s opening party on September 1st.We are quite excited for this party. He will expand our rug journeys all the way to South America and Afrika. People have probably heard his take on Ata Kak “Daa Nyinaa” so many times because it has been played by so many DJs in Belgrade. And on September 22nd, we will have a very important guest from Germany.

Since you are from Istanbul but you are based in Belgrade, can you tell us what do you like about our capital? Also, is there something that you dislike?

Belgrade feels quite like my childhood years in Istanbul. Much more traditional, much more intimate, no gentrification. I like the general vibe which is present in the city, it is very common to me. Something I dislike…Sometimes too many good parties in a row which keep me away from being productive.

What do you think of the Belgrade’s club scene? Can you compare it with the scene in Istanbul?

In my opinion, Belgrade club scene is very brave and open-minded. This city has two million people and there are a lot of different crews playing/promoting different kind of genres/sounds. For example the drum&bass crew. Istanbul has almost twenty million people but you rarely see a big drum&bass name in the city. Also techno, but not the commercial one,  is very well promoted in Belgrade. In Istanbul, I wouldn’t have a chance to  listen to the most of the DJs that I have listened here. Belgrade is much more similar to cities like Berlin, London, Paris in terms of electronic music.

Are there some special local DJs and collectives you enjoy?

Schwabe has been a very big influence to me ever since I heard him for the first time on 20/44. No need to mention Tapan, if you are into Schwabe right? Also Disco Not Disco parties. Mangulica Fm is also one of my favorites. I like his old edits. His “milo moje” edit usually causes a strange atmosphere and unpleasant eye contacts but I never gave up on that track. I also appreciate what Chorbika is doing. It is always a pleasure to share the night with Marko and Jelena. Since they have a label now, maybe I should go through old project file, finish few tracks and send them a few.

Give us your Top 3 favorite music venues in Belgrade and shortly explain why?

KC Grad. 20/44 and Drugstore. Because of who they book and the vibe.

For the end please announce your next party and invite our readers to join!

Next party is on September 1st. Season’s opening party of KC Grad. Our guest will be Noema from Berlin. By the end of the month, September 22nd, Acid Pauli will be in KC Grad, hosted by Midnight Orient. It will be a good start for sure. Also, there are a few gigs in the future for me in Skopje, Sofia, Vienna, Sarajevo. May the rug be flying high.