Interview with Maja Maletković: “We as a team wanted to tell our story masks off”

The piece “What the fuck are we doing here”  is being played  in English language and deals with the phenomenon   of ,,the  brain drain “, bearing in mind  the mind boggling statistics that nearly 200 000 young people up to 30 years of age in Serbia are unemployed and we are the first country in the region and the second worldwide in the number of young and highly educated people who are moving abroad for ever. Today we will be talking with the director of the play Maja Maletković.

Hello, Maja, could you please introduce yourself to “Still in Belgrade” readers?

I am a theatre director from the amazing city of Belgrade.

I find your play/performance “What the fuck are we doing here” very insightful. Can you tell me why you’ve decided to perform it in English and not in your native language?

Because it ties in nicely with the topic of the performance. On one hand, when people leave their native country they also renounce, in a way, their native language and substitute it with a foreign one. Secondly, this is also because English language is to some, in a way, the language of escapism- most of my favorite works are in English- movies, TV shows, books etc and they represent an escape route from my reality into a new one similar to mine yet different.  For e.g. like this play does.

Also, when did the initial idea to create this performance first occur to you and why?

The idea occurred to me when one of my best friends, Aleksandra Mrda, who is also an amazing artist I have worked with for years, including the play which was a great success ,,Volvo trucks” in Atelje 212, left Serbia to go live in Chile.

I seemed to have realized at that point that out of my ten closest friends, half now live abroad, and from the looks of things the rest will be leaving Serbia any time soon. So I thought- wow, this is not the way things should be. We should talk about this issue. So I decided to give a performance on it.

In the play actors discuss the young people living in Serbia and the concept of “brain drain” so I wonder whether it is your own story or a story of all of us living in the Balkans?

I have to say that I agree with you up to a point. Besides Željko who is an actor, the whole artistic team- including myself- is performing on stage. So there are no ,,actors” per se. We, through various topics explore what ,,the brain drain” means to us.

The stories we share are rather  personal, yet the issues we seem to be presenting are much more profound and the audience seem to resonate and warm up to  them quite well. They seem to be identifying with the issue yet  they are able to hear our personal points of view on them, which makes the whole thing quite compelling. 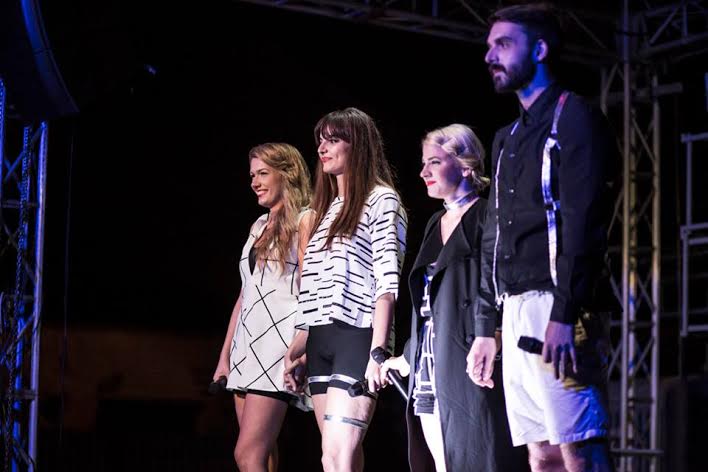 Who do you think  is your target audience? I have noticed loads of foreigners in the audience.  How do you think they respond to your performance?

The audience is a really extraordinary and exceptional blend- young Serbian people, people who are Serbian living abroad and  foreigners.

After the performance the foreigners seem to be leaving Mikser House apparently quite overwhelmed. We have received  loads of praises and genuine compliments that makes you heart jump with excitement i.e. compliments  from people from Denmark, U.S.A., Russia, Jamaica- to name but a few . Most of them never really understood what actually had happened to people here over  the past 25 years, and only now seem to be getting a bigger picture as to why a lot of young Serbians wish to leave.

Do you tend to improvise or there is a script for the play that is followed each time you perform?

Most of it -90 percent  follows the script in writing.

We know that you didn’t hire professional actors to perform in your play. Why is that so?

Because we as a team wanted to tell our story ‘masks off’. It seemed less of a hypocrisy than staying behind the scenes. We took on all the responsibility and we stand behind every word of what we are saying. And we all have a very personal stance on this issue.

What do you think you can achieve with “What the fuck am I doing here”? Is there any goal in our existence?

Alert people and make them think what leaving Serbia means to everyone and why they would really leave and under which conditions . And to those who are not from here we wish to shed light on what living in Serbia, or more specifically Belgrade, is really like.

In your opinion what is the position of independent theaters and plays today in Belgrade? How many are there? Can you name a few which are to your liking?

We can’t really talk about the position because the independent scene is practically non- existent. I believe this is because we still have not defined the ,,mainstream” here, so you can’t have a strong alternative scene if everything seems to be concocted and mixed together.

Any plans for the future?

To keep on creating. And, on a more personal note, to improve my French and Spanish

ART & DESIGN, WHAT'S ON
What the fuck are we doing here?