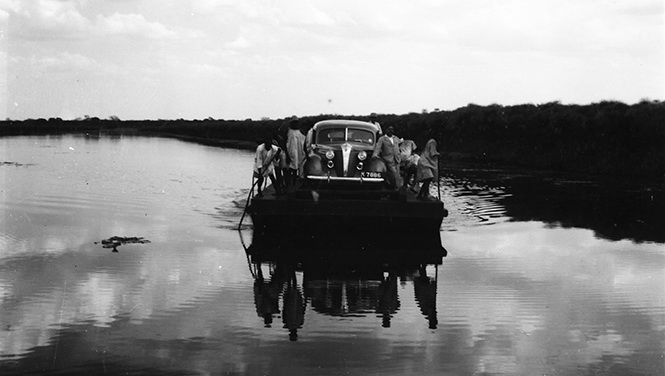 The еxhibition will be opened by:
Professor Branimir Karanović, Faculty of Applied Arts, Belgrade and
Amosi Peter Rwangarya, Associate at the Museum of African Art

Museum of African Art in Belgrade

The exhibition “Kenya, Tanzania and Uganda: 1937–1939. Photographs by Koloman Trčka” presents a selection of black and white photographs depicting life and work of the peoples of East Africa and European businessmen and tourists in that region at the time of the British colonial rule. Most of the photographs which Koloman Trčka had taken 80 years ago have never before been presented to the public. His photographs capture encounters of people from different quarters of the world, locals and foreigners, the distance between and the interplay of their worldviews, revealing power relations.

The exhibition “Kenya, Tanzania and Uganda: 1937–1939. Photographs by Koloman Trčka” documents different aspects of the colonial economy through photograps of planataions of cotton, coconut, cofee and other crops which were exported from Kenya, Tanganyika and Uganda to the world market in the 1930s.  One segment of the exhibition deals with the development of Bata company which achieved success on the world market with its mass production and distinctive management practices in the 1930s, when it began expansion into East Africa. Between 1937 and 1939 Koloman Trčka sojourned in present-day Kenya, Tanzania and Uganda where he managed the purchase and export of leather for Czechoslovakian Bata Company and with his camera, he recorded  various business situations in an informal, vivid manner. From the urban environments, Koloman Trčka’s photographs report about strike of dockworkers in Mombasa in 1939, while his depictions of old sailing ships in the harbor and the palace in the historical town of Gedi reveal centuries of tradition of urban Swahili culture on the coast of East Africa. In a series of photographs, the exhibition presents unusual story about an African man who tamed a crocodile, which became a tourist attraction in the late 1930s. In the genre of landscape, standing apart at this exhibition are the images of the White Nile, vast expanses of steppe, magnificent Kilimanjaro. The exhibition also documents a personal climbing achievement of Koloman Trčka – his ascent to Kibo, the highest summit of Kilimanjaro, which he reached in March 1939.

The exhibition “Kenya, Tanzania and Uganda: 1937–1939. Photographs by Koloman Trčka” presents negatives, photographs, original photo albums, a selection of vintage picture postcards and newspaper articles from the collection of Trčka family and large-format reproductions of photographs. Also, the exhibition displays a model of photographic camera from the 1930s from the collection of the Museum of Science and Technology in Belgrade. The aim of the exhibition, based on the documentary value and aesthetics of photographs by Koloman Trčka, is to point to different aspects of culture, social relations and economy during the first decades of the colonial rule in the territory of present-day Kenya, Tanzania and Uganda.