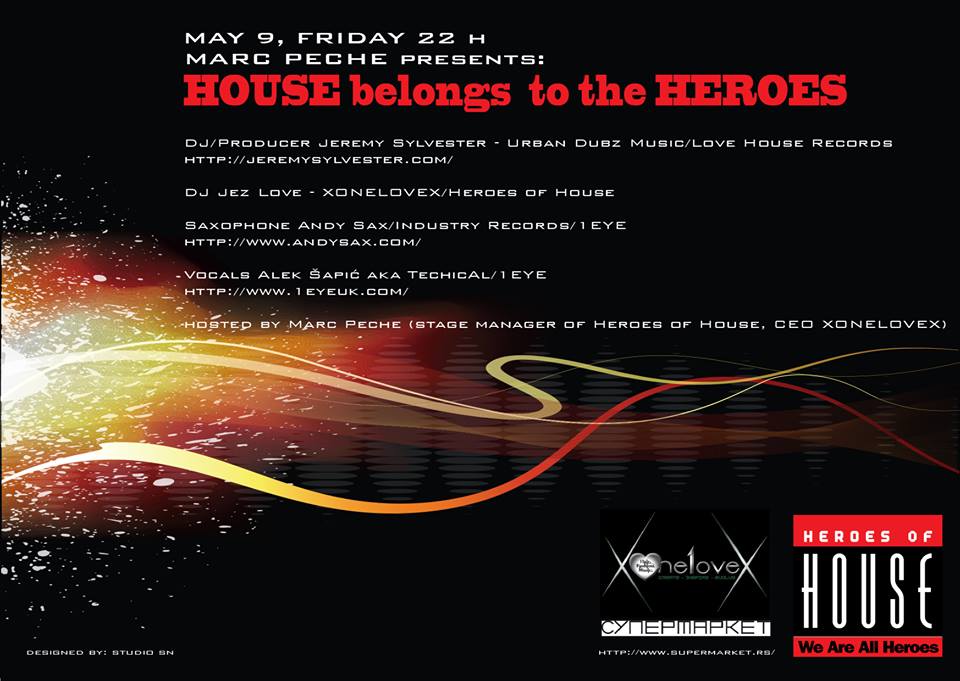 On Friday, the 9th of May in Supermarket concept store from 22:00, get ready for House belongs to the heroes, unique event prepared to you by UK artists. You can expect a fusion of sound, a combination of funky vocal house with a mix of tunes accompanied by saxophonist and singer.

XONELOVEX productions is bringing you a DJ, producer and remixer from UK Jeremy Sylvester,  which is considered to be an important link in British clubbing scene since the nineties. Jeremy had three amazing singles on the UK top 20 and has sold four million records worldwide. Jeremy as a disc jockey can show a wide repertoire of musical styles, combining them into a sound that has become unique and it defines him as an artist. In his sets he combines deep house, garage, classic house, deep tech etc. DJ Jez Love is resident of XONELOVEX and Heroes of House, he is deejaying for twenty years and he has been cooperating with most famous names of the UK electronic scene. You can expect classical vocal funky house sound from Jez. Heroes of House exist since 1992 and had a big influence on UK clubbing scene. Smaller events started in nightclub called Baker in Birmingham, because of huge success, very soon, club was visited by M. Hucknail, Bjork, Kate Moss, Oasis, Jamiroquai etc. Heroes of House as a brend, helped promoting of one of  world’s biggest DJ’s such as: Pete Tong, Paul Oakenfold,,Roger Sanchez, Todd Terry, Boy George, Laurent Garnier and Carl Cox.

Sets of  the guest DJ’s will be followed by Andy Sax  from band 1EYE, one of the most popular British saxophonist. Andy cooperated with many famous artists and played in front of a large audience worldwide.  Singer of the band 1EYE, Alek Šapić will be joining also. 1EYE found inspiration in bands such as Madness, Prince Buster, UB40. They are unique and distinctive by their approach to music we all know and love

How will all of this look like and sound, you will see and hear on Saturday. It’s totally different experience, a pleasant atmosphere, happy people and an unusual way of connecting the different styles of music, certainly, will not leave you indifferent. Bring your dancing shoes and come to enjoy with us. We are expecting you.