Mihael Milunović: The Place Where I Used To Stand

Mihael Milunović: The Place Where I Used To Stand

Salon of the Museum of Contemporary Art, 14 Pariska street 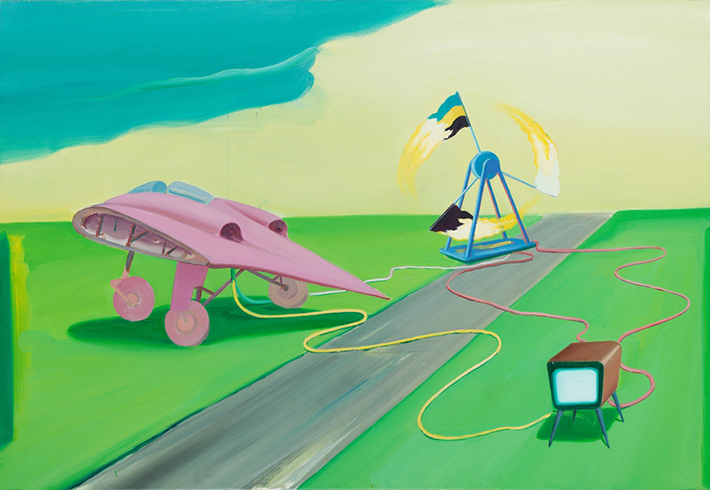 ”With his recent cycles of paintings and drawings, Mihael Milunović has founded a sort of “places of fiction”, serving not as passages into some imaginary situations or worlds, but as places for provoking directly the existing distribution of reality and fiction. Although at first sight reminiscent of surrealism and metaphysical painting, Milunović’s paintings are not surreal, but merely use the visual code of surrealism to subvert and rearticulate the links between signs and paintings, paintings and time, signs and the social space framing the existing sense of reality. This is an art whose exaggerated artificiality of presentation performs a fundamental break in our perception of reality, offering specific cognitive patterns for understanding social processes and phenomena in all of their polyvalences, contradictions, and anomalies. Milunović explores the reverse or dark side of the contemporary world, filled as it is with violence, repression, manipulation, dehumanisation, militarism, and exploitation, departing from the assumption that critical distance is most effectively established when, as the French philosopher Jacques Rancière would say, the fiction of politics is posited inside the fiction of art”. Dejan Sretenović, curatorMihael Milunović was born in Belgrade in 1967. He graduated from Prof. M. Antonović’s class at the Faculty of Fine Arts department of painting in Belgrade in 1992. He received an MA degree from the same Faculty in 1995. In 1995–96, he specialised in painting in Prof. V. Veličković’s class at the École nationale supérieure des Beaux-arts in Paris. He was the founder and first president of ProArtOrg, a Belgrade-based nongovernmental organisation (2005–2008). He has taught at art academies in Paris, Saint-Étienne, and Cetinje. Milunović has curated and organised a number of exhibitions, edited the Obojeni svet (Coloured World) programme at the Museum of African Art in Belgrade (2006); he was artistic director of the second edition of the Mixer Festival (2010), etc. He has published a number of texts in the domain of contemporary art, travelogues, and exhibition catalogues. He is a citizen of France and Serbia. He lives and works between Brussels and Belgrade.Mihael Milunović has presented his works in solo exhibitions in galleries throughout Europe and the world (Pièce unique, Paris; Guy Bärtschi, Geneva; Georges Verney-Carron, Lyon; Voice Gallery, Marrakesh) and participated in a large number of group exhibitions: at the Ludwig Museum in Vienna; Stedelijk Museum Aalst, Belgium; Esterházy Stiftung in Eisenstadt, Austria; Musée international des arts modestes in Sète, France; PAN, Naples, Italy; Musée d’art moderne, Saint-Étienne, France; Museum of Contemporary Art in Belgrade; Kunsthalle Fridericianum, Kassel, Germany; Poznań and Valencia biennials; Secession Hall, Vienna; Jeu de paume, Paris; etc.His works are featured in the collections of the Ludwig Museum in Vienna; Musée d’art et d’industrie de Saint-Étienne, France; Museum of Contemporary Art, Belgrade; Siemens AG; LEUBE, Salzburg, Austria; Palazzo Forti, Verona, Italy; Azraq, Marrakesh; Barzai-Hollander, Brussels; Moët & Chandon LVMH, Epernay, France; Telenor, Belgrade; Wiener Städtische Serbia; Renoir; Maya Picasso; as well as many other private collections around the world.Milunović was the 1997 Renoir Foundation laureate.

CITY GUIDE, WHAT'S ON
The Origin of the Matrix: Contributions for the History of a Collection of foreign Prints and Drawings of the Museum of Contemporary Art
WHAT'S ON
ART EXHIBITION: VESNA PAVLOVIĆ: REFLECTIONS ON IMAGES
WHAT'S ON
The Secret Life of Belgrade Suburbs