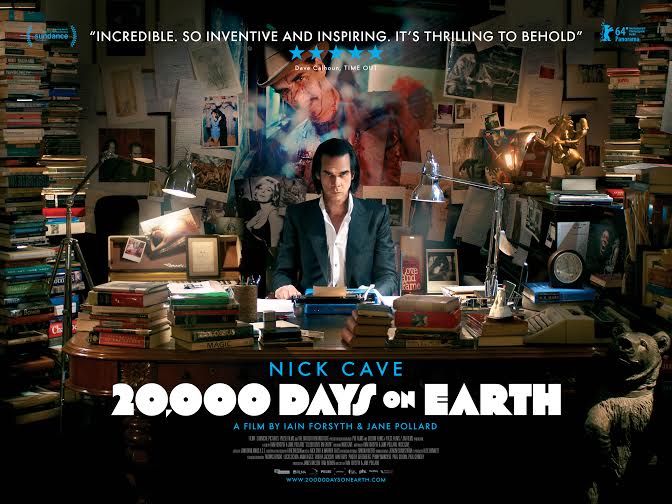 On November 7th, for the tenth edition of the Free Zone Film Festival, which deals with social topics, there will be a gala opening with the screening of a documentary 20.000 Days on Earth in Sava Center. Ticket sale starts on the 1st of October at Sava Center, and on the 5th of October at Eventim office.

20.000 Days on Earth as a docu-fiction biopic of a rock and roll superstar, a musician, a poet, a writer and a screenwriter hasn’t come by chance. Ian and Jane previously made 14 short films for the reissue of the complete discography of Nick Cave and the Bad Seeds. In those films former and current members of the band, associates, collegues and devoted fans of different age comment their favourite songs from those 14 studio albums of the band and the significance that those songs had in their lives, vividly portraying all incarnations of a strange phenomena in the contemporary rock scene – Nick Cave. In the film 20.000 Days on Earth the auteurs take a step further. They do not deal with Cave as a man as much as they deal with his artistic persona and him as a storyteller. Death, love, God and sex – he is a combination of Elvis from hell and a serial killer, a dark preacher and a convict on an electric chair. If that’s not enough, he writes books and film scripts, composes music for film and theater, obsessively  leaned on an analogue typewriter on a table filled with notes and books. Forsythe and Pollard do not deal with the demystification of the rock star, on the contrary, they arrange situations, provoke reactions, they flirt with his ego and open up a space in which reality and fiction are two parallels existing in one ordinary day of an extraordinary man. “He’s a ghost, he’s God, a man, a guru” while he, as an all-knowing storyteller, explains his music and talks about the unbreakable bond between existence and storytelling, time and reminiscence Tied together, they are the sole essence of our own being, without them there wouldn’t  be us as well, as Cave points out in the film. On the peak of his fame and commercial success, a fifty-five year old admits in front of the camera that his biggest fear is the loss of memory as it leads to non-existence. We can be saved only if we leave something behind us and share it with others. In the film finale we witness that “something” as Cave, the storyteller, steps on stage in the Sydney Opera House, giving the word to Cave, the musician, and his band, The Bad Seeds. Art transforms us, it takes and gives the best of us, it is the essence of our existence, and it will be as long as there is us.

When 20.000 Days on Earth opens the 10th Free Zone Film Festival on November 7th it will be the end of an era, as well as a new beginning. This film is a dedication and a gift to our beloved audience. We thank you for your support, inspiration you’ve given us and durability for the last ten turbulent years, for all of our past and future memories.