A traditional Novi Sad event begins on  Saturday, December 9, 2016, in the Great Hall of the SBC Vojvodina (SPENS) at 4 pm, where all the most important bands from Serbia and former Yugoslav countries have performed so far.

This year at the NS Concert of the Year, the audience will have a chance to see and hear:

–     Repetitor – Debutants at the NS Concert of the Year. The band was founded in winter 2005. Repetitor have been performing throughout Belgrade since the beginning of 2006, and later in other major cities in Serbia and with other bands such as Partibrejkers, Kanda, Kodža i Nebojša, Jarboli, Dža ili bu, Obojeni program.

They announced their third album at the end of last year with the hit single Beskraj. Already at that time, it was obvious that the trio did not stray away from their set goal in the new album either. Their strongest weapon are concerts, and with that in mind, they also started working on eight new songs, which they recorded practically in a single take – the band Repetitor does not know differently but to do either everything or nothing. This gives the whole album a genuine emotional charge and a garage flavour. A high-voltage sound wall hits us, bursts of anger, fear, violence, pain and frustration. On one side, the furious Boris Vlastelica cuts guitar strings and turns the punk punched chords into hurricane, heavy riffs. On the other side, playful Ana-Maria Cupin, as she is becoming one with the bass, making a post-punk balm. Milena Milutinovic, an untamable drum animal, links it all together playing as if on a doomsday.

–      Gift – In 2009, as the leader and founder of the band, Joca Ajkula goes to London where he experiences and revives all his musical preferences, playing with eminent music names and then returning to Novi Sad in 2013 with such rich experience, and completely changing the line and direction of GIFT. By fully reinstating into authorship, with an indispensable support of the new young band members, with their fresh energy and a lot of working hours in the studio, finally in 2015 the band releases the singles “Mona” and “Divan San”, and then the entire album “Dreamoscope”. With the three music videos, for the tracks “Mona”, “Divan San” and “Eksperimental”, as well as the entire album, the band GIFT presented a new stage-music expression, which some critics positively call ‘progressive Britpop’.

–      Women’s rock trio, Tri Kapljice from Novi Sad, have already earned great attention
of media and different audiences with their first two singles and videos for the songs “Hajde” and “Jaka”. It is especially worth mentioning that they found themselves on most of the national and regional top charts with the debut single and the video for
the song “Hajde”, and that this song was even ranked first on the list of regional hits in the show “Twentilator – top region-list” of the Zagreb Radio 808. After reaching the finals of the biggest regional festival “DEMOFEST” in Banja Luka last year, Tri Kapljice began working on their debut album to be released this year.

The sponsor of this year’s NS Concert of the year is the City of Novi Sad, and our concert got the status of an event of exceptional significance from the Directorate for Culture for the sixth consecutive year. NS Concert of the Year has been a visible cultural lighthouse for more than two decades of its existence and has significantly contributed to Novi Sad being ready for the title of the European Capital of Youth, and to the fact that last year it was declared the European Capital of Culture in 2021.

Pre-sale tickets at a promotional price of 1,200 dinars (floor) can be purchased by Tuesday 31 October online via the Gigstix Sales Network (www.gigstix.com). Starting from November 1, the price will be 1,350 dinars for the floor and West sector 2, while the price of a very limited number of tickets for the West 1 sector will be 1,450 dinars.

The price of tickets on the day of the concert will amount to 1,500 dinars.

Design for this year’s NS Concert of the Year was done by Novi Sad designer Robert Kliban.

As part of the promotion of the NS Concert of the year 2017, at the official Concert of the Year YouTube Channel, you have the opportunity to listen to and watch almost all of the most important recordings from the old NS Concerts of the Year, including many of the legendary performances (EKV, Rambo Amadeus, Direktori, Deca loših muzičara, Zabranjeno pušenje, Miladojka Youneed, Bloodbath, Električni orgazam, Oružjem protivu otmičara, Prljavi inspektor Blaža i Kljunovi, etc.), also for the first time exclusive recordings from the NS Concert of the Year in 2016, in full HD quality and stereo sound, as well as a large number of old musical videos of the former NS Plus production (Džukele, Love Hunters, Obojeni Program, Boye, Goblini, Bjesovi, Gluve kučke, Instant Karma, the old Van Gogh) and many others. In addition, thanks to the kindness of RTV, we also have in our archive complete recordings in high resolution of all the performers from the previous NS Concerts of the Year, at your disposal as well.

Hurry up with the purchase of tickets, because we are expecting to have another unforgettable NS Concert of the Year, an event that people talk about and remember forever, on Saturday, December 9, 2017, starting at 4pm! 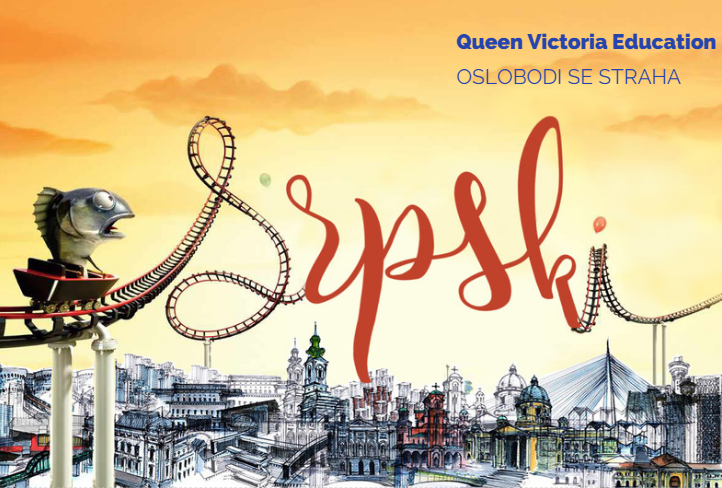 If you’re reading this, chances are you’ve been in Belgrade for a while now and you’ve tried all sorts of ways to learn Serbian. But something’s not quite right. Serbian seems too difficult and a bit scary. Well, fear no more!

If you’re still eager to learn Serbian, professors in Queen Victoria Education can teach you. Serbian is actually fun!
Enroll now.
011/3230738, 0637230352 or school@qvictorias.com