Orange Week to be held in Belgrade 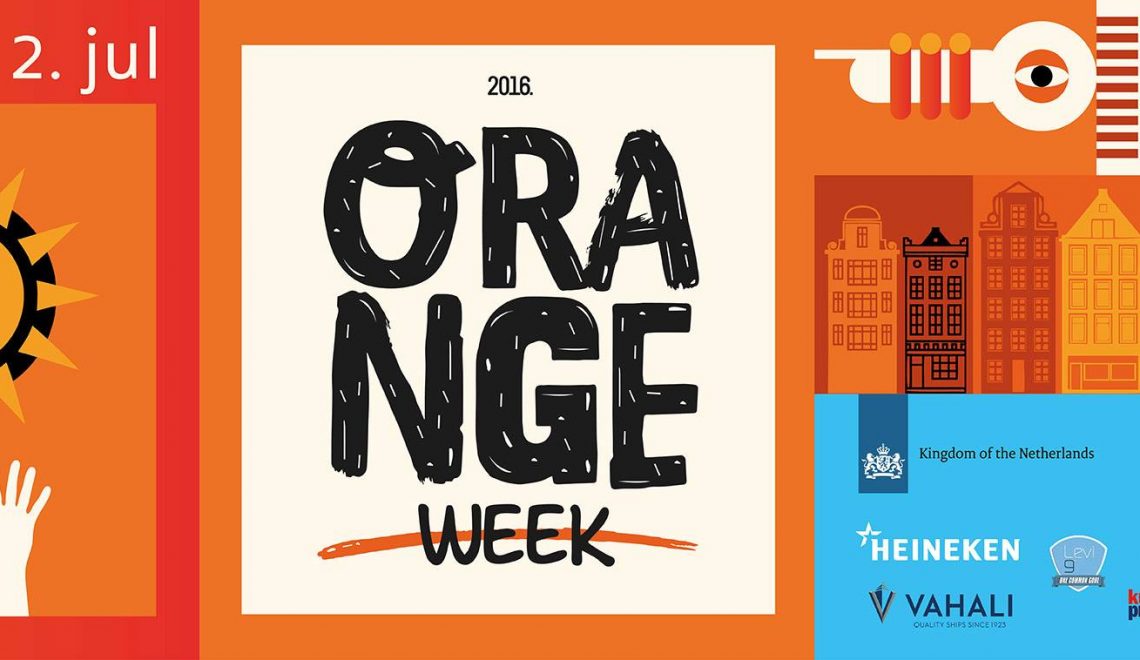 On the occasion of the end of the presidency of the European Union, the Royal Netherlands Embassy organizes the Orange Week – Dutch Culture Week in Belgrade, from 27 June to 2 July 2016. The new Dutch films from the prestigious International Film Festival in Rotterdam will be  screened in Belgrade Youth Centre.

Orange Week will begin with “Deli Monday” event at the Cultural Center Grad, where the team from the Embassy will be cooking for guests, preparing  delicious meals and  surprises for the occasion. The orange team is expecting you in the garden of KC Grad with very good music!

“Applied Nostalgia” is a joint exhibition of photographs by Serbian and Dutch photographers, which will be presented at the Mixer House. Marko Rupena photographed places and situations in Amsterdam to remind him of Belgrade, whilst Ilvi Niokikćin photographed Belgrade, which resembles the Dutch capital. The project is an initiative of the Office for European Integration of the Republic of Serbia, with the aim of promoting cultural cooperation and promoting the country holding the Presidency of the European Union, as well as to promote Serbia  with support on its way to the EU.

Orange Week will be more than just fun. The initiative called Dutch Association Orange Fund will be held for the third time and realized in Belgrade. The aim of this initiative is to emphasize the importance of volunteer work and active participation of citizens in the development of the community where they live, and employees at the Embassy this year will help a local initiative.  This initiative has  so far helped Shelter for children Shelter for adults and the elderly in Belgrade….

The grand finale of Orange Sunday on Saturday, July 2, when in the evening Palata “Albania” and Ada Bridge will be lit in orange.

On that very day you will be able to participate in several major events in Belgrade. Firstly,  in the Republic Square to announce the winning name for orange roses that were planted on the promenade near the Sports Center “Milan Gale Muškatirović”.

Then with the Republic Square at 17:00 moving mass bike ride through the city called Orange Bike Ride. T his ride will endeavour to draw attention of the wider public to the rights and duties of cyclists, and promote the bicycle as a healthy, economical and ecological means of transport. Dress code: orange!

Within the Film Street from 20:30 behind the Natural History Museum at Kalemegdan, the Dutch film “Admiral” will be shown from 2015, directed by Rul Raine When a young republic Holland is attacked by a large Kingdom of England, France and Germany, whereas Holland itself is on the brink of the civil war, only one man can handle the strongest weapons in the country, the Dutch fleet: Michiel de Rauter.

For the end of the Orange Week Party will be held at the Belgrade Fortress (KK Partizan courts), and if you get dressed in orange, you got yourself  a free admission to the Orange Party to 23:00. You will be entertained by DJs from Serbia and the Netherlands until well into the night.