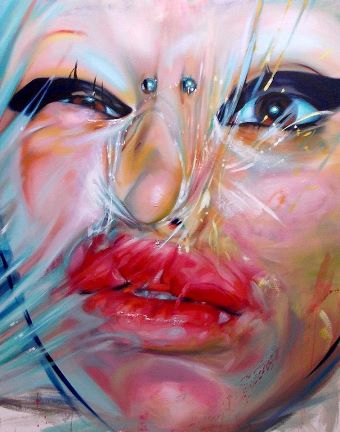 My work represents images from reality, which fascinates me. I use reality and project it on canvas, distorting, emphasizing and changing it in order to find some sort of truth.Models are confrontationally placed; like a smack on the face – close-up shows parts of the body, which fill the canvases. I want to explore their inner state, our current human condition and how media and modern society affect it.I don’t want to judge. My intention is to display the tendencies we all have as ‘victims’ of media – how our bodies and sexualities are gradually adapting to this fast change. Bodies transformed in order to seek their own identity. Bodies becoming objects in themselves.

There’s a new Lust in the air, image-driven and propagated through the media. It’s like a virus infecting the very core of today’s sexualities. It has mass epidemic proportions, where our attitudes, thinking, and behavior work against human relations. This Lust has somehow created a ‘pseudo-sexuality’ that goes against our true nature.At a first glance, a shock lures the viewer into a mesmerized state. There is fascination, an intrigue. Then, when you look closer at each painting, you begin to question each captured moment. Who are these people and what is happening to them? Are they dead or alive? Are they frightened or proudly displaying themselves?When looking at Prijic’s work, one is confronted with this ‘pseudo-sexuality’ phenomenon. Allusions to Warhol and the distorted bodies in Bacon’s figure paintings are evident here, but Prijic takes you on to another place; a journey into a perverse and distorted reality, a journey into pseudo-sexuality and humans infected with