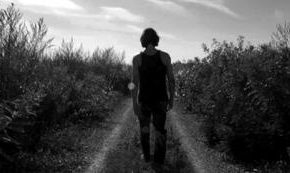 The opening of the exhibition will be held on Monday from 7 p.m at  Gallery 12 New Media Hub in 59 Karadjordjeva street

Pieta a project consisting of two video projections, with sound, two large size  photographs, and an online blog page related to the process of conceptualization  and production of the project. Pietà is the title of the whole project, while on the  iconographic level it applies also to the photographs exhibited as an integral part of  it, which in life size (200x180cm) depict a lying semi-naked male and a sitting female figure in the ambience of a graveyard. The first thing that strikes the eye in their composition is the lack of almost any physical contact between the two figures. In fact, there is some physical contact between them on the photos, but so slight that it almost escapes observation. In the video segment they are completely separated, not only by the fact that they are presented in different frames, but also because the male figure is shown from the back, as if moving away from the viewer and from the female figure.

Biography of the artists:

Margareta Jelić was born in Belgrade in 1967. She graduated at Faculty of Applied Arts, Department for Painting in 1992, and has a MA degree in Interdisciplinary Studies, Group for Multimedia Art at the University of Arts in Belgrade. In 2008 she finished her PhD Studies at the Department of Multimedia Arts, University of Arts in Belgrade. Since 1991 she has exhibited regularly in solo and group exhibitions at home and abroad. He is author of several art projects ( “Flux junior “, “Quaternio terminorum”, “Smart Disobedient Girls”, “Animart ” ). She is interested in animation as an artistic medium and she is author of numerous animated works. He is a member of ULUS and ULUPUDUS since 1997, and since 2000 she is a member of Association of Artists of Austria BVO (Berufsverband Bildender Kunstler Osterreichs). From 2008 till 2010 she was a lecturer at doctoral studies at the University of Arts in Belgrade.

Mihajlo M. Jovanović is one of the few living art performers of his generation who lives and works in Belgrade. His professional experience is vivid and is the result of Jovanovic’s interest in various forms of art and expression. Performance ” Black and White ” was performed with the artist Milan Nenezić in 201 in KC Drugstore, with Maja Atanasijević he done a performance called “GSP Miniatures” in 2012, he did a performance “Fenix” in 2011 on the Republic Square in Belgrade, and he did a performance “Reversed Heart” in the UK Parobrod. He is a producer of a number of songs for theatre plays and movies, and the author of the exhibition ” Pop Meets Punk” in a gallery space in Ljubljana 2013, he participated the collective exhibition “ID – DI ” by the curator Marko Stamenković with his conceptual work, ” If This Is Entertainment” in Students’ Cultural Center in Belgrade. He has his own musical project “Dunduew ” and he is an author of the radio emission “Porno Pop” at NOFM radio.