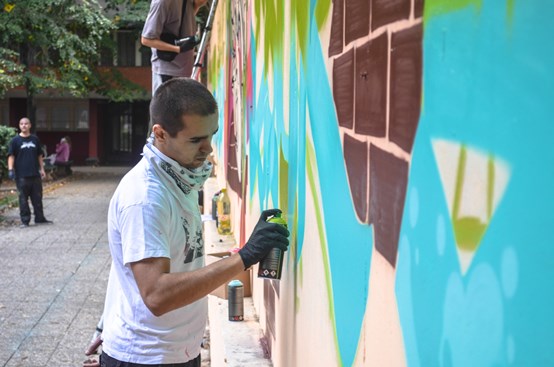 During October 2014, for the fifth consecutive year the “Group Ide” organized graffiti workshops that were part of the project “Rapresent”. In this year’s workshops participants painted a mural on the back wall of the Simpo building in 241 Bulevar Kralja Aleksandra (King Aleksandar Boulevard).

In previous four years withinin the graffiti workshops “Rapresent” several underpasses were painted, the one at the “Studentski grad” (2010, 2011), the one at the shopping mall “Piramida” (2012), and the one at the shopping mall “Usce” (2013). This year the authors decided to step out of the underpasses and embellish a playground in one of Belgrade’s residential areas outside of the central city zone. To this effect they have chosen a playground behind the Simpo building in the Lion borough of Belgrade.

On this occasion the organizers would like to thank to the company “Simpo” for their permission for the wall to be painted and to the residents of the municipality “Lipov lad” for their support and help in the realization of murals.

As in previous years, the youth of high school age who are already involved in the graffiti art were invited to participate. The actual paining of the mural was preceded by preparatory art and educational workshops, in which the participants jointly prepared the sketches of the mural, and they were helped and guided by more experienced and established graffiti artist Lortek. 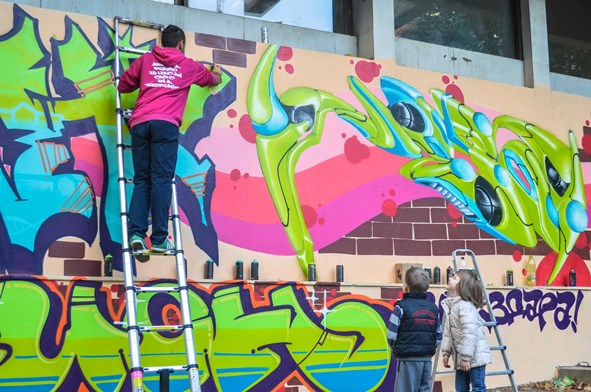 The project “Rapresnt” was initiated with an idea to secure a place for creative expression of the youth in a way that would enable them to take part in the embellishment of the neglected public spaces. The idea was to encourage a development of a more positive image of this kind of art in residents and general public, and simultaneously to develop a more responsible attitude of young graffiti artists towards their environment.

The project “Rapresent” is realized with the financial support of the Ministry of Culture of Republic of Serbia and the Secretariat for Culture of the city of Belgrade, in cooperation with the city municipality Zvezdara and Cultural Establishment “Vuk Karadzic”.