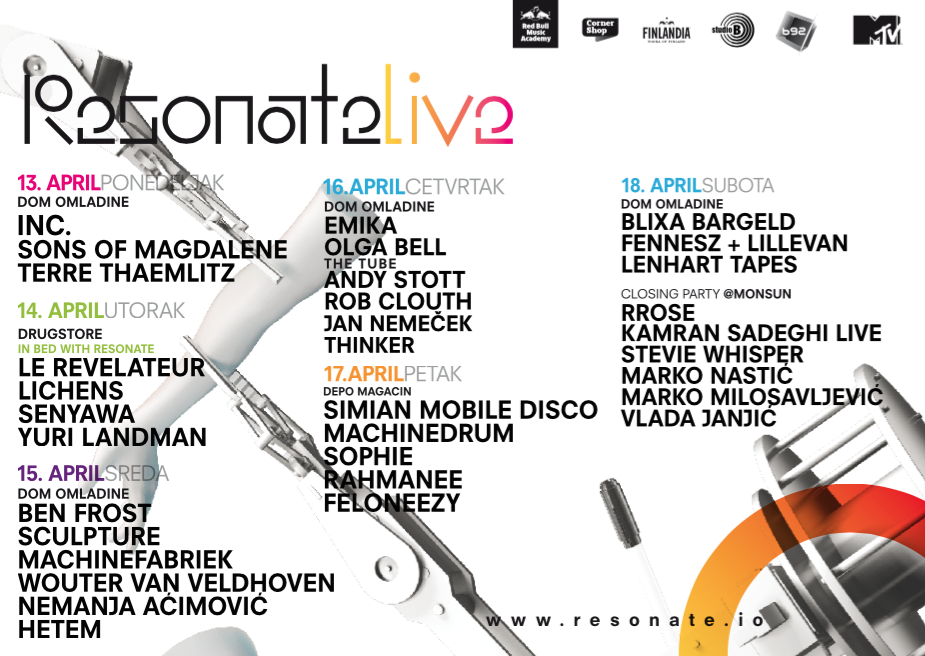 Resonate 2015 begins next Monday, April 13 in beautiful building of Yugoslav Film Archive (Jugoslovenska Kinoteka) at 10am.

Following the success of the last three editions, Resonate festival is back this year and will take place Monday to Saturday – 13-18 April 2015.

Continuing to explore the boundaries of art, media and technology, the new edition of Resonate festival expands its programme to six days and will include over 40 participating artists and thinkers across a range of activities including talks, workshops, panel discussions and music performances. This year Resonate is also partnering with a number of educational institutions and organisations to even further diversify programme and provide visitors with an in depth overview of current situation in the fields of music, visual arts and digital culture.

Resonate 2015 begins with LIVE programme, dedicated to the influence of contemporaty technologies on music and new tendencies in music in general. It consists of workshops, panel discussions on new tendencies in contemporary music as art, but also in the music industry.

Resonate LIVE programme contains two parts – daily that lasts first three days of the festival and will be held in Yugoslav Film Archive. Many of the performers will take part in educational programme of the festival, announcing some interesting lectures: Ben Frost, Olga Bell, Lichens, Terre Thaemlitz to name a few.

One of the stars of this Live conference is Bill Drummond, member of the popular band of ’90’s – KLF. His lecture is titled Twelve Steps To Twenty Twenty-Five and will be held on Wednesday, 16th April, also in Yugoslav Film Archive.

All six days will include numerous concerts in many attractive venues.

Resonate is always supportive towards young and multi talented local artists, and in this years’ schedule you will get the chance to here Serbian stras: Marko Nastić, Jan Nemeček, Hetem, Rahmanee, Feloneezy and Stevie Whisper.

This year’s Resonate visitors will get the chance to enjoy venues that they’ve already been to past years, such as Belgrade Youth Centre, Yugoslav Film Archive, club The Tube, Magacin Depo, Drugstore and Monsun.

CONFERENCE programme continues on LIVE programme and lasts three days – from Thursday until Saturday. This programme is what acctually Resonate is, opening to the participants creative processes in art through new technologies and new media. Workshops, lectures, screenings and exciting audio-visual performances make this program of the festival.

All the information regarding this year’s Resonate, find on resonate.io/2015 and follow: