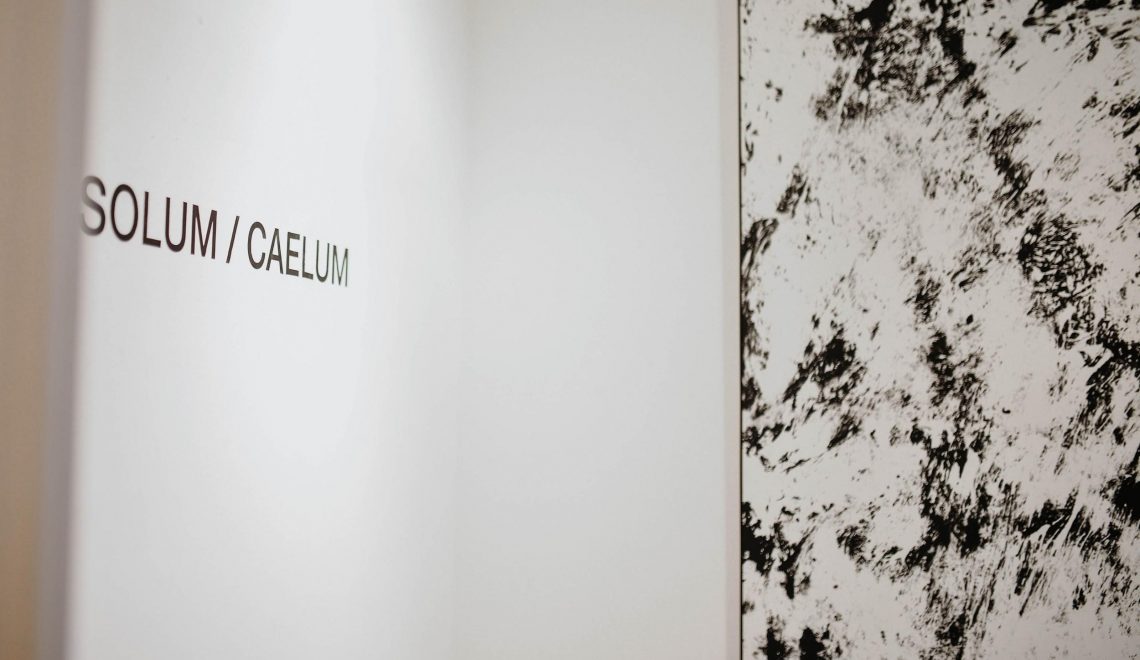 Exhibition SOLUM/ CAELUM in an exhibition space at the House of King Peter I represents a very complex and strategically designed exhibition system that can be interpreted in different ways. I will try to make one of them in further text.

The author presents his artistic research and production from the past few years, through two main series of paintings, the black and white series/ SOLUM and blue and white/ CAELUM. Milan also introduced digital art and virtual reality technology into his works, which are presented in the basement of the Gallery, where the journey through the exhibition starts.

The first step into the basement involves you in a mysterious and intense space, still remaining of the period when the building was made, more than one hundred years ago. The old furnace as the resemblance of the past times gives you a notion of horrific scenography. But the artworks are opposite to the ambient, there is a QR code with the title “Scan me to see the future” and more than ten small square black and white geometrical abstract prints. When you scan a QR code and look at the digital artworks through your mobile camera, you see three-dimensional human skulls in different shades and colors from white to black, and different angles, that are easily moving to your face, or position in space. Those skulls reminded me of the famous artwork “Ambassadors” painted by Hans Holbein the Younger, were in the front of the ambassadors almost threatening the “floats” curve surface that, looking at the picture from the right corner represents the human skull. The skull is always a symbol of death and resemblance of time flow and our final determination and destination.

The other artwork placed in the basement is the VR work that shocked me. When I put on the VR helmet and looked through it I saw a dead author, Milan, lying on a table in a morgue, with a white bandage on his eyes, dressed in a black suit. The “Rosemary’s Lullaby”, also called “Sleep Safe and Warm” from headphones was calming, but the presentation of the dead body in combination with the sound caused many emotions, from the first shock to true sadness.

Here death is a dominant motif and my opinion is that the artist was seeking motifs that were supposed to be just a little bit shocking to the viewers. On the other hand, this spatial installation is the logical outcome of artistic research that Milan has done in the past few years.

The first level of the exhibition, the Death theme installation, can be interpreted in different ways, as an exploration of possibilities of digital technologies and Virtual Reality in art, but with a strong and focused narrative of death and human determination. Also, there is a possible interpretation considering Roland Bartes famous essay, The Death of The Author, which signifies that the death of the author is the birth of the reader or viewer of the artwork.

Does Milan want to disappear from his art or literally die for art sake?

We may think that when an artist deliberately disappears, and he may wish it to be thought that his work just came about naturally, to represent skills as instinct, intellect as a reflex, choice as a necessity, labor as slumberous ease.

On the upper floor of the Gallery, there are black and white abstract paintings, profoundly curated and settled in perfect order. From almost white paintings to the black monochrome, that gathers all layers in one, as a logical and unique ultimate painting. This series of paintings are artistic research of theoretical and historical aspects of light and darkness, represented in white and black surfaces. In artistic processes, the artist was drawn to numerous styles of abstract paintings and tried to depersonalize the process of creation using different techniques. In some paintings, he used the dripping technique, where the black paint was dripped on a white surface. The results of this technique are different white-and-black paintings, while the process itself involved him in the reduction of black, gradually increasing the volume of white, so the first works of this series are almost monochrome black paintings and the last ones are almost entirely white.

The second phase included painting on square canvases, using grass leaves as the method of painting, usually the black on white, two-dimensional surfaces. The last series of black and white paintings led him toward researching dualism in the sense of positive-negative, which he incorporated in the process of mapping canvas on canvas.

The term SOLUM means the surface and subsoil layers that have undergone the same soil-forming conditions. In the interpretation of the curatorial praxis of this exhibition, it is the logical layer that comes over the Death theme from the basement.

The next two levels bring us to new abstract paintings in white and blue. The artistic process is the same as in the previous series of black and whites paintings. Two-dimensional white surfaces with different traces and forms of blue. A reminder of blue skies and Heaven that can be reached through contemplation and as assumed by theology through death. Two rooms with these paintings bring the viewer to the next level of consciousness and thinking of the previous path through the exhibition.

Going on the next floor I enter the room with very minimal video artwork with blue sky with the penetration of sun rays and the sound of quiet sea landscapes. Finally, the polyptych made of square blue and white paintings and a few male figures in different poses of jumping into the space of paintings makes the feeling of falling into the void or jumping into Heaven. The term CAELUM is from astronomy and represents a faint southern constellation that is visible between the constellations of Columba and Eridanus, and it is represented by the figure of an engraving tool.

Milan does not sign his paintings, he represented himself as a dead man at the first installation at the exhibition, therefore continuing the praxis of abstract painters such as Rodchenko or Reinhardt, making him present and absent at the same time. So, the artist presents us a part of his personality and emotions, “at first a cry or a cadence or a mood and then a fluid narrative, finally refining himself out of existence, personalized itself in a way. The esthetic image of death in the dramatic form is life purified in and reprojected from the human imagination. The mystery of esthetics, like that of material creation is accomplished. The artist, like the God of creation, remains within or behind or beyond or above his handwork, invisible, refined out of existence, indifferent, paring his fingernails.”[1]

My advice to all of you who have read this text to visit this extraordinary exhibition (until October 14), to understand the concept and to contemplate the journey from the darkness all the way to the blue skies of Heaven.