You already know how much I love Savamala and especially Savamala’s street art.

This time I want to take a deeper look into Savamala’s street art by asking the protagonists of this colorful revolution a few questions, those street artists who painted Savamala walls and turned derelict warehouses into the much sought after neighborhood of downtown Belgrade.

And so, let me introduce you to INK, Aleksandar Maćašev and Sqon. 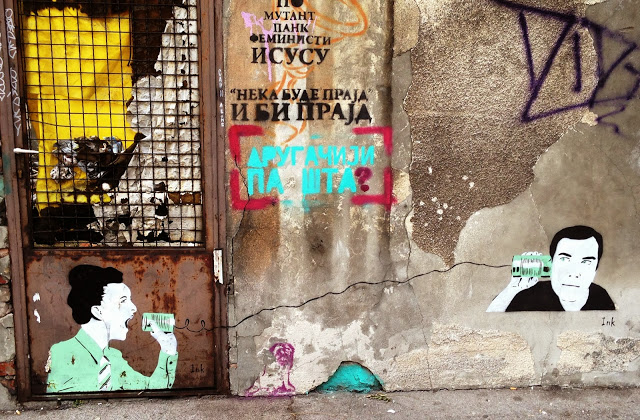 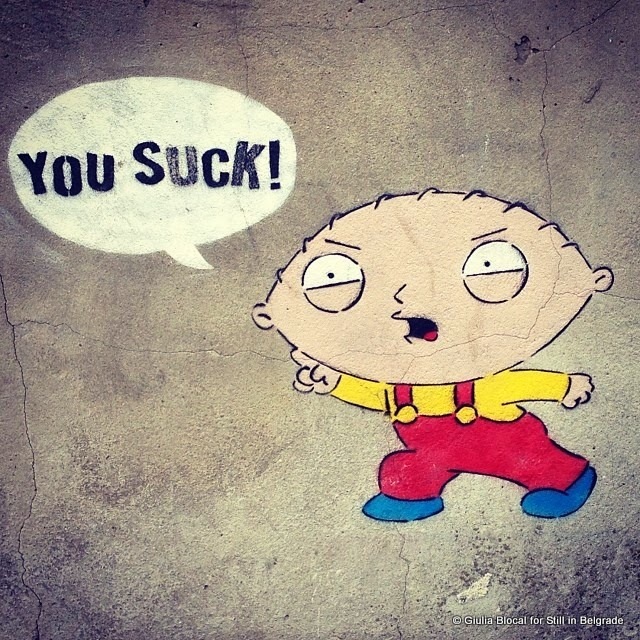 While I was graffiti hunting in Belgrade, the street artist I liked the most was INK,  especially his works in Savamala and within the BIGZ building. Besides doing some amazing street art, he is also a professor and he plays in two bands: Incomplete and Technicolor Lies.

When did you start painting on walls and why?

I actually created my first stencil on a T-shirt for my band, and soon I tried it on a wall. So that’s  how everything started about 7 years ago. At first I wasn’t very aware of the stencil scene in Serbia (I grew up in Belgrade but moved to Obrenovac, and later to Kragujevac where I did loads of my early work; I say this because the stencil art can mostly be seen in Belgrade and is the only place where stencil art scene seem to be living and hopefully will grow), so I just started creating what came to my mind and sprayed it onto a wall. Later on, when I came back to Belgrade I continued working  in a very different atmosphere but with the similar approach to when I started.

Which is your personal link to Savamala?

I used to pass by on a regular daily basis for almost a decade while I was going to  high school and later to college so I’m pretty familiar with all of its corners.

And what is the link between Savamala and the art work you created there?

I always loved the rough and unsightly surfaces to work on. Real street art on clean, polished, white wall is not much of a joy. If you’ve been to Savamala you know what I’m talking about.

Besides what I have said so far, it’s still a place with ordinary people and a sense of reality, which is not as bright, but still much more real than futuristic “Belgrade on water” that seems to be planned by the government in full stride.

How do you imagine this neighborhood will grow from now on and in 5 years’ time?

I hope it will go in the direction of balance between people and the city, leaning more towards the artistic and more humane side, ‘cause that’s what we need more of than simply ‘economic’ makeup. It is still to be seen. Fingers crossed!

I think it’s really good, not confined to some standards and expectations, but very open and going in the right direction. No matter who is creating it, professionals, street art lovers, or just some random people what is  important is that it’s growing, being well accepted and much more appreciated than before. As for the best street art I think whether you find it on a big building’s mural or just in some small corner of a wall, if it makes you look, think or just smile, that’s where it is. 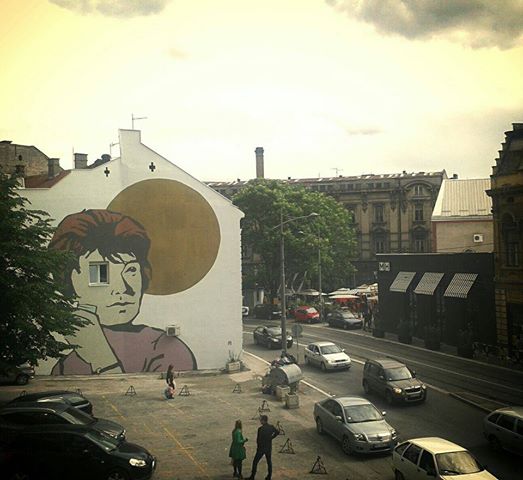 Aleksandar Maćašev is a Serbian artist and designer born in Bečej, moved to Belgrade to study architecture and from 2008 he lives and works in New York.

Maćašev is best known for blurring the boundaries between various virtual art disciplines.

When did you start painting on wall?

I’m neither a mural artist nor a street artist in any strict sense of these labels. I’m an artist who works in the fields of web based art and graphic arts/design. On and off  I make ‘detours’ into the field of outdoor installations and graphics.

Which is the story of your mural painting in Savamala?

Two years ago the founder of Mikser, Maja Lalic, asked me if I would like to contribute a mural for Savamala neighborhood of Belgrade. Mikser would be in charge of the location and execution and I just need to provide a piece of artwork. Mikser team provided the mural in collaboration with Ceresit Paints and it was painted by street artist and painter Stevan Šoln. Ceresit Paints offered us facade paint but the palette of colours was somewhat limited, but that opened up new possibilities of adding metallic and fluor paints.

Is it a site-specific installation or a sketch from your past?

Maja was fumbling through my work and she found a T-shirt design I made in 2011. It’s called Waiting for the Sun, having the song by   The Doors’ in mind. The design is based on a matchbox label I found in a book about vintage Hungarian matchboxes form the post-war Socialist times. One of these labels drew my attention. It was a movie poster for ‘The Promised Land’ (Az ígéret földje, 1961) by Gyula Mészáros and it showed a young woman with a glass in her hand looking back at what appeared to be a town in a distance. I re-drew the woman, removed the image of the town and added the sun instead. Finally I did a silk-screen print of it on a T-shirt. Maja thought this would be great for a mural. She sent me a photo and a layout of the wall and the design matched it perfectly. We even got an extra twist as the bathroom window was in the place of the woman’s right eye. We might have even got the effect of her giving us a wink as people turn the light on and off. The melodramatic social realist story of the movie behind the original poster might also suit Savamala. It’s about Ica Krizs, the girl from the poster, who works in the mine. She’s not responding to the guy who’s in love with her, because she’s in love with somebody else. As it normally happens in similar stories,  she finds out where her true love lies when it is too late. ‘A promised land’ that we never  seem to reach. So there’s this transition of the poster from 1961 that ended up on a matchbox, 50 years later I used it for a T-shirt and then a mural. I find it an interesting exercise in scale (poster, matchbox, T-shirt, mural), transformation of the image and cross-cultural values.

SQON is an Italian street artist popular all around the world for the  cats that feature there, which reached Belgrade street art district in Savamala.

When did you start painting on walls and why?

What is your personal link to Savamala? And what is the link between Savamala and the art work you realized there?

Sasa Charlie Popovic found a legal wall to paint on in St Brace Krsmanovic. I used colours recalling those of Savamala walls to create a painting which would be in harmony with the town. and there is a reference to cats, which are quite popular in Belgrade.

What do you like about Savamala? How do you imagine this neighborhood will grow in 5 years from now?

I really liked Savamala people, their houses, the fact that street art is almost everywhere in Savamala. In 5 years’ time  surely it will be packed with my cats.

I don’t really know Belgrade street art scene, I am from Montereale Valcellina, a small village in the North of Italy, but for what I saw it is very dynamic! Regrettably I did stay less than 24 hours, so I really need to come back! Again, street art in Belgrade is practically everywhere, even in the town centre which has many wide, perfectly suitable walls. 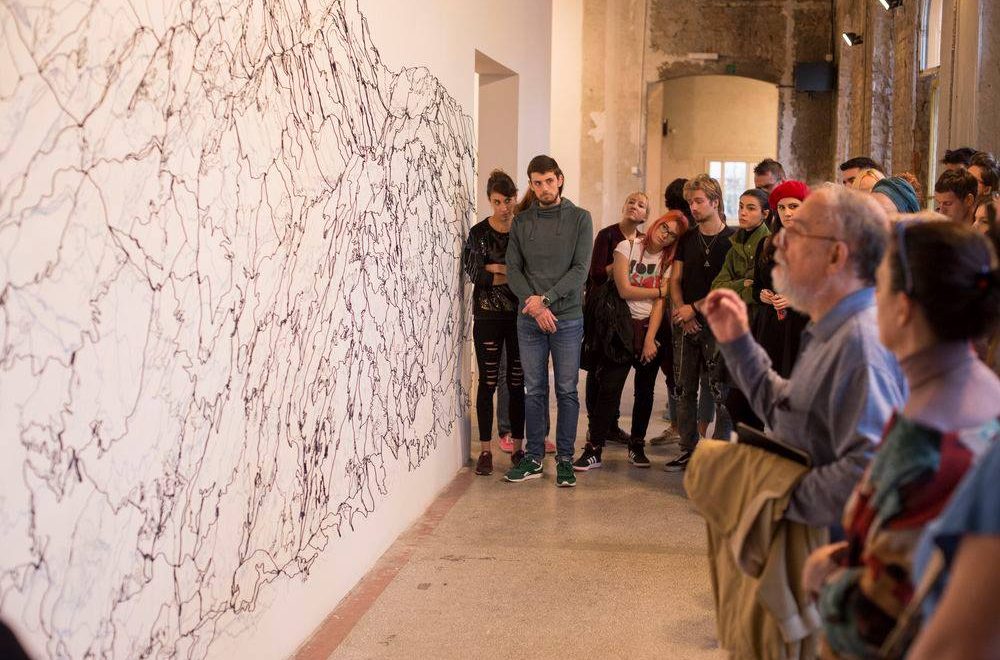 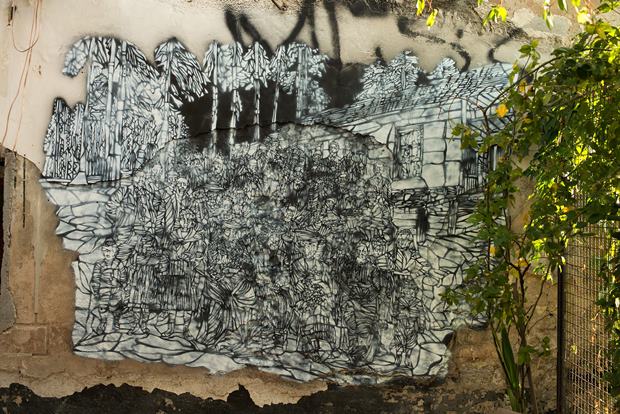