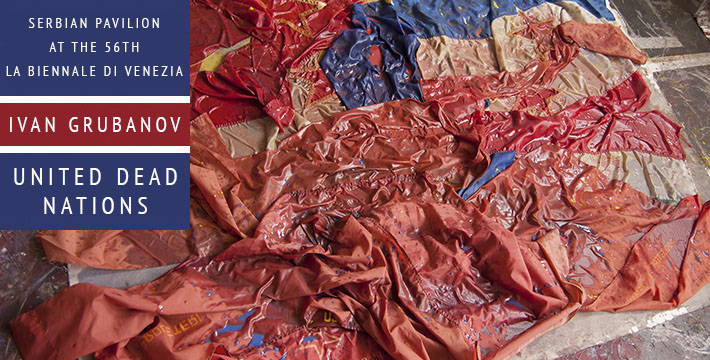 The United Dead Nations project representing the Serbian Pavilion at the 56th International Art Exhibition – La Biennale di Venezia by artist Ivan Grubanov explores the historical and cultural setting of Venice Biennale as the platform for projection and representation of different visions of modernity. The installation United Dead Nations aims to establish a dialogue on what does the notion of the nation represent in our post-global times by putting in focus the nations that no longer exist as such, but whose ghosts are still conditioning the geo-spheres they had occupied (Austro-Hungarian Empire, Ottoman Empire, Soviet Union, German Democratic Republic, Yugoslavia, etc.). By doing so, the multifaceted spectrum of desires and conflicts, which the notion of nation embodies, is considered and the questions of nature and permanence of today’s nations are being imposed. United Dead Nations recreate an absent political and enable its alternative life in the aesthetic regime of art by opening new representational relations within the field of the visual – the space where social reality is translated into forms and images.

Ivan Grubanov thereby puts the emphasis the process of image making by involving the dead flags as models, means and material during his painting ritual. The artist’s intention lies in the creation of a new symbolical field, which questions the value frameworks of art, at the same time enabling the reestablished authorities of dead nations to continue competing in the domain of the visible.

The artistic practice of Ivan Grubanov (b. 1976) is marked by a post-conceptual approach to the medium of painting and the articulation of historical memory against the contemporary condition. His process-oriented painterly method evolves into a podium for knowledge production, persistently posing challenging questions about our social and political realities. Educated at the Belgrade Academy of Fine Arts, the Rijksakademie van beeldende kunsten in Amsterdam, Delfina Studios in London and Casa de Velazquez in Madrid, Ivan Grubanov has established his international career throughout numerous solo, group, and biennial exhibitions worldwide, as well as many artistic and scholarly awards since 1997.

United Dead Nations project in the Serbian Pavilion at the 56th International Art Exhibition – La Biennale di Venezia is supported by the Foundation of the Museum for Contemporary Art Belgrade and Ministry of Culture and Information of the Republic of Serbia.