The Museum of Contemporary Art in Belgrade, Institute for Foreign Cultural Relations from Stuttgart and Goethe Institut would like to invite you to the exhibition of one of Germany’s greatest post-war artists Sigmar Polke, Music from an Unknown Source, which will be opened from September 15th 2014 through October 31st 2014, at the Milica Zorić and Rodoljub Čolaković Gallery-Legacy (Rodoljuba Čolakovića Street, no. 2). The exhibition opening is planned from Monday, September 15th, at 19h. 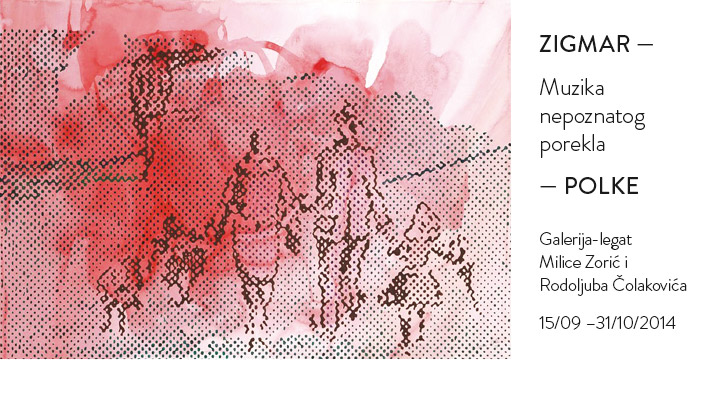 The exhibition will display 40 guache paintings of the artist, painter and photographer Sigmar Polke created throughout 1996 as a result of his collaboration with the Institute for Foreign Cultural Relations. The employment of a specific dripping  technique and the form of comic strip drawing enhanced with humorous titles, are the core characteristic of the exhibited series that represents a resume of sorts of the artist’s work to this point. These representative works facilitate considerations into the complexity of the artist himself, the multilayered quality of his work and variation span. The works offer insight into the opus which has a unique position in the contemporary art scene, and Polke himself is considered one of the most important German artists of the post-war period.

Sigmar Polke (1941-2010) is one of the most significant German representatives of European pop art and co-founder of the Capitalist Realism movement. Fleeing the Red Army with his family from Lower Silesia in 1945 he arrived in East Germany. From 1953 Polke resided in West Berlin, then Düsseldorf, where his interest in art set off. He enrolled in the state academy where, among others, he was taught by the famous Joseph Beuys. In 1963, together with Gerhard Richter and Konrad Lueg, he founded capitalist realism, the stylistic approach formulated as the opposite of the better known socialist realism. He held his first solo exhibition in 1966 at the Rene Block Gallery in West Berlin, after which commenced his breakthrough onto the European art scene.

Since the early ‘60s, the time he started his art engagement, Polke has been investigating the complex relationship between reality in the painting and reality around him, art and everyday life. In such a sense, the artist creates a detached position, which enables him to develop an ironic approach towards his immediate surroundings, and in the sense of his painting, to pay attention to the means of expression, that is, the plastic layer of the work. The artwork of Sigmar Polke is a direct answer to the domination of American aesthetics, as well as a comment to the artistic doctrine of the western civilisation lead by consumerism. Throughout his creative lifetime, Polke experimented with a great number of styles, themes and materials, and during the last two decades of his life he was focused on historical events and their contemporary perceptions.

Throughout the 1980s Polke’s art, alongside the works of G. Richter, A. Kiefer, G. Baselitz, J. Immendorff, marked the return of German painting to the world art scene.

He won numerous awards including the Golden Lion for painting at the Venice Biennale in 1986.

Conceptual artist of the exhibition: art historian Goetz  Adrijani and the artist Sigmar Polke. Museum of Contemporary Art curator: Svetlana Mitić.  The exhibition is open to the public daily, except on Tuesdaya, from 12 to 20h. The Čolaković Legacy location:http://www.planplus.rs/objekti/2090/legat-milice-zoric-i-rodoljuba-colakovica.