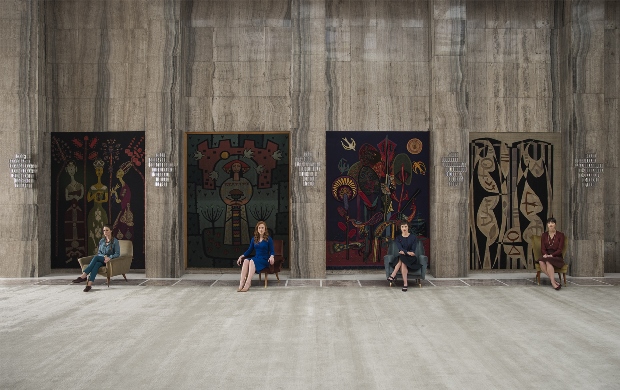 The exhibition investigates how art and architecture can serve as power strategies of every political order. The exhibition is composed of a performative installation and a new film work, which the artist shot in the former Palace of the Federation in Belgrade.

The artist’s new project for the Museum of Contemporary Art Belgrade presents the third chapter of the artist’s series Spielraum(initiated at Ludwig Museum Budapest and MGLC Ljubljana earlier this year) which questions the potential of instrumentalization of visual language, rhetoric and architecture in the construction of the State as a spectacle throughout recent history.

Cibic’s new film features an all-female cast and frames its four characters: a Nation Builder, a Pragmatist, a Conservationist and an Artist/Architect. The film’s dialogue is composed of quotes drawn from various political speeches, debates and proclamations on iconoclasm of architecture, art and monuments; the language that endorsed demolition and redesign, which was to aid the creation of new displays for ensuing nation-states or ideological positions throughout the 20th and 21st centuries.

The building represented the physical embodiment of new ideas in post 2WW Yugoslavia. What was constructed as the stage for new world politics presenting the middle grounds for states in the developing world between the Western and Eastern Blocs in the Cold War, today exists as an empty theatre box: void of its actors. It is the stage that becomes the actor itself, it is the stage that Jasmina Cibic resurrects as the focal point of ideological consideration in her exhibition Tear Down and Rebuild. Movie trailer  https://vimeo.com/137537719

During the exhibition, a performance will take place, where a group of artists will be gilding this series of positive affirmations on composite landscape: a space covered in its entirety with representations of a fictitious landscape that the artist has composed from numerous photographs drawn from the archives of Josip Broz Tito’s personal photographers. These present picturesque and sublime landscapes as captured by the artists (photographers) in the servitude of the state, setting the scene for the various protocol events.

Jasmina Cibic (Ljubljana, 1979) is one of a new generation of Slovenian artists who lives in London.  Her practice, although acutely conscious of a specific national political, cultural and artistic lineage creates a very distinctive language of its own. She engages in media of video, installation, object and photography. She has represented the Republic of Slovenia at the 55th Biennial of Contemporary Art in Venice, followed by international success.  Jasmina Cibic has presented her works in solo exhibitions in galleries throughout Europe and the world and participated in a large number of group exhibitions. She has won several awards including awards Bevilacqua la Masa and the Trend for outstanding achievements in the visual arts in Slovenia. More about the artist athttps://vimeo.com/jasminacibic and www.jasminacibic.org