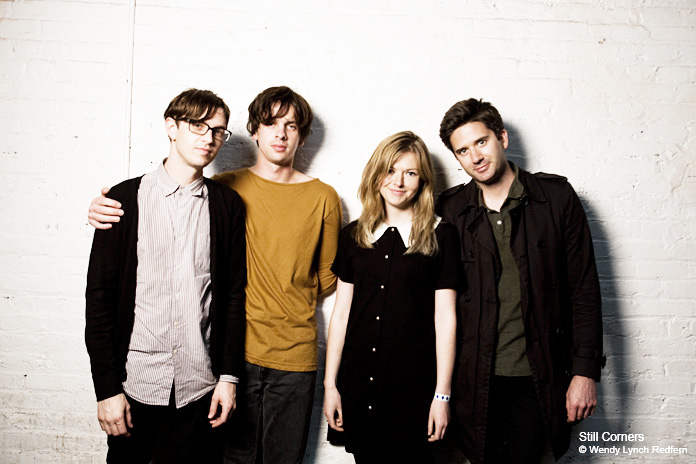 On the 7th of May, British dream/synth pop band Still Corners will perform in Belgrade for the first time ever. The concert will take place at 8:30 pm in Dom Omladine (Youth Centre).

With influences that span the spacey experiments of Vangelis, the expansive, cinematic sounds of Ennio Morricone, and the clean-toned guitar stylings of the Shadows, Still Corners is the project of Greg Hughes and Tessa Murray. The group formed shortly after Hughes, an American expatriate, met Murray by chance at a London train stop in 2009.

Tickets can be purchased through the Ticket Vision sales network, as well as online at www.tickets.rs. Early bird tickets are available by the end of February at a price of 900 RSD. From March 1, concert tickets will be available at a price of 1200 RSD.

In 2010 Still Corners released singles Don’t Fall in Love/Wish on 7-inch through British psychedelia label the Great Pop Supplement with an accompanying video for Wish directed by Lucy Dyson. Selling all 700 copies in a single day saw Sub Pop take due notice and quickly sign the group. Their first full length, Creatures of an Hour, was released by Sub Pop in 2011.  By the time of their second record in 2013, Still Corners had shifted focus from ’60s influences in favour of a slicker, more ’80s-sound inspired by Roxy Music’s Avalon. Another Sub Pop release, Strange Pleasures includes the hit single Fireflies (Pitchfork, Best New Track) and sleeper hit, The Trip.

To record their third album, Murray and Hughes relocated from London to the English seaside. Moved by the water’s intense dark colour, they named the set of songs Dead Blue. The album, which featured the Brian Wilson-inspired single Lost Boys was released on Still Corners’ very own Wrecking Light Records in September 2016 and was the highest-rated dream pop album on The Line of Best Fit in 2016.

Still Corners return in 2018 with a new album, Slow Air. Evoking the atmospheric sounds Still Corners are known for, Slow Air continues the band’s journey with a lush, ethereal album inspired by the heat of America’s west.

“We wanted to hear beautiful guitar and drums and an otherworldliness, something almost indefinable along with a classic song writing vibe.  We’re always trying to get the sound we hear inside of ourselves, so we moved fast to avoid our brains getting in the way too much.  The name Slow Air evokes the feel of the album to me, steady, eerie and beautiful.”  Tessa Murray

Slow Air will be released on Wrecking Light Records on 17th August and the band will be touring in North America and Europe this autumn.