The secret behind the Salvador Dali’s corner 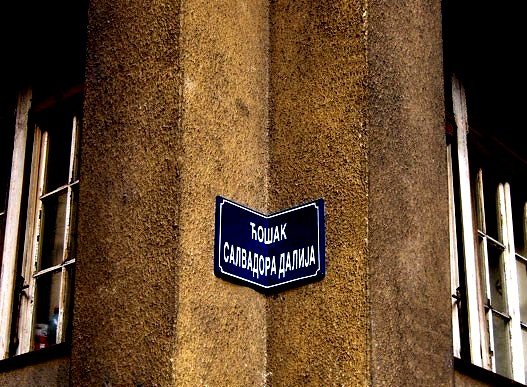 In the last 7 years, the Serbian capital Belgrade has become home to  a evergrowing practice of public art and urban design. In the heart of Belgrade, at the corner of Simina and Kapetan Misina streets stand the famous “Corner of Salvador Dali”. Many of you might be walking past it, but hardly anyone knows who the creator of this very quirky street art is. Although there is a sign with the name of the famous painter, like any other street signs, “Corner of Salvador Dali” hides an unusual story beneath it.

The board is set by the “Illegal Confectioners”, in September 2006, inspired by Dali’s famous painting onto which distorted spilled watches are painted . So that corner near the place where the members of the group met seemed  the perfect place. “The first panel ended infamously, because the neighbors didn’t seem to take to  our artistic expression, so it was torn down and lost. But, we set up another panel, which is still in the same place” stated artist Pavle Ćosić for Dnevno.rs  online magazine

“Illegal Confectioners” as Belgrade informal, multidisciplinary, art collective was formed in 2004 at the initiative of members: Ivana Tobić, Pavle Ćosić, Miloš Trajković, Emilija Andrejević and Boris Sterešina. In 2006 the members founded the label “Cornet” that was affiliated to the collective mentioned.  In addition to publishing, music, contemporary art, performances, the collective was the initiator of creating and planting false information. They consensually split up a few years later, but left behind a multitude of art works in their wake.