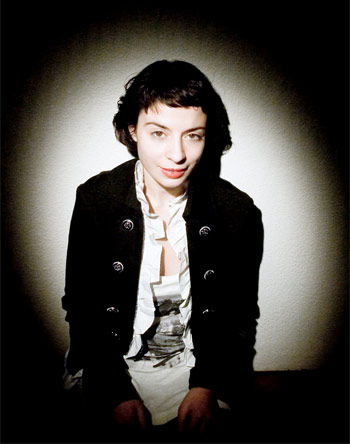 The Tube presents “Tuborg Prior Exit Party” featuring German dj and producer Maayan Nidam. Party will occur on the 26th of April and it will be free of charge.

DJ  and producer that also works under the names Miss Fitz, Laverne Radix and Spunky Brewster.

If her chosen name means anything—which it surely does—it’s not that Ms. Nidam is some sort of misfit. It might be more accurate to say that Maayan shapes sound to fit her own singular sensibilities—a strategy that has resulted in a significant and growing body of recorded work and a reputation as a talented, versatile DJ who unerringly takes listeners to special, unexpected places.Since she began DJing and producing in 1999, Mayaan has racked up an impressive discography. As Miss Fitz, she has released EPs on Archipel, Sushitech, Raum…musik, Eklo, Kalimari, Freak n’ Chic and Contexterrior; she also travels in disguise as Laverne Radix, with one single so far for Oslo’s Love Letters from Oslo. March 2009 also marks the release of Maayan’s debut release under her own name: “Night Long” (on Japanese label PowerShovel), an intimate album woven together out of recordings of Cuba’s best contemporary instrumentalists. It’s not the first thing that might come to mind when recalling an artist best known for machine grooves and moody funk—but that’s what makes the move so quintessentially Maayan.As if that weren’t enough, Maayan is no stranger to collaborative efforts. Working with Lee Curtiss and Shaun Reeves as Uli Künkel, she’s put out EPs for Kalimari and Phonocult. And Mara Trax, Maayan’s DJ/production duo with Frankfurt’s Vera, is a force to be reckoned with in its own right. The pair has recorded for Oslo and Cyclical Tracks, and their Resident Advisor podcast introduced their lean, loose-limbed style to listeners the world over. The most fortunate fans, of course, have caught Mara Trax in their native terrain: the club, where their long, evolving tag-team sessions generate a rare kind of energy—the essense and spirit of house music, of dance music itself.

S
The diversity of Mayaan’s sound is no doubt a result of an unusually global upbringing. Born in Tel Aviv, she lived in the Mediterranean city for most of her life, studying multimedia and, following a six-month stay in New York, beginning to DJ bars and small parties. Tel Aviv isn’t a big place, though, and so when Mayaan came to feel that she had hit a wall in her home town, she packed her bags and set off to travel the world. Argentina was her ultimate destination. But after a six-month stint in Amsterdam, she found her way to Berlin, which turned out to be exactly she was looking for. Inspiration was everywhere, from the avant-garde Club Transmediale festival to Jamie Lidell’s experiments in live sampling to, of course, the city’s legendary underground party scene. She soaked up everything, building up her studio and experimenting with different sounds and processes, gradually inching towards the dance floor. Five years later, she remains in Berlin, making music and molding the contours of the city’s clubs to fit her own inimitable vision.

It’s impossible to reduce Mayaan’s productions and DJ sets to a single sound, but certain qualities prevail: a loping, swinging, hips-and-ass-friendly sense of the groove; a bubbling sense of funk; a keen sense of timbre and tone color, with a wooly low end and crystalline highs. It’s also possible to discern a certain sense of humor, as well—nothing over the top, simply the occasional wink or sly grin as a riff steps out and takes its star turn. Like the best musicians, Maayan’s work is all about communication. No wonder she understand the dance floor so well, making her a regular fixture at clubs and events like Tokyo’s Colors Studio, Frankfurt’s Robert Johnson, New York’s Wolf + Lamb, Belgium’s Decadance, Amsterdam’s Mono-Club, Jerusalem’s Pacotek, Switzerland’s Hive Club and Cityfox @ Alta Börse, and many more—as well as her “space monkeys unite!” nights at Watergate and Arena Club in Berlin.