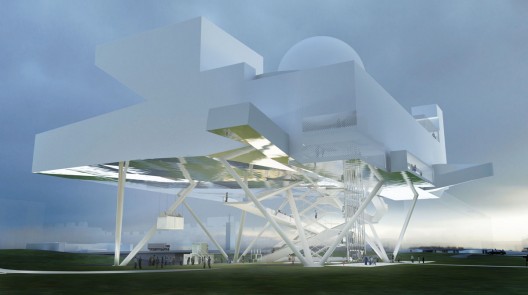 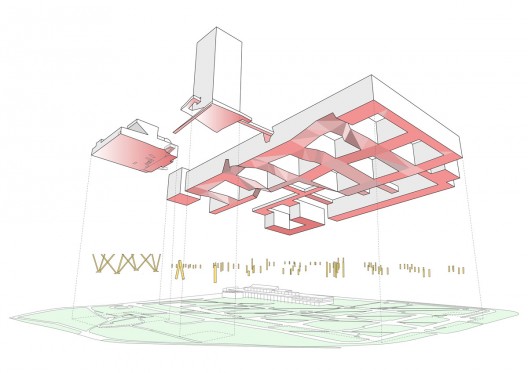 The Ministry of Science and Technological Development of the Republic of Serbia initiated an international competition for a Centre for Promotion of Science and the urban development of Block 39 in New Belgrade. This design aims to be an institution of service and a national bank of knowledge in the field of science for the general public. An international jury unanimously selected Austrian architect Wolfgang Tschapeller’s project as the winning project.

The Centre for Promotion of Science in Belgrade will be floating high above the ground. It operates on three levels. Firstly, on the level of the City of Belgrade it will be an optimistic sign positioned on one of the main routes of the city. Secondly, for Block 39 it will be a sign, canopy and portico. Thirdly, as a building programmed to promote science it displays and plays on visions of technology and construction. The architectural language of the centre will strongly be one of technology and the display of structural principles. A special role is given to the underside of the centre; it will have mirroring qualities, able to reflect all the movement on the ground as well as the visitor who by entering the centre penetrates the reflections of the Earth’s surface.

New Belgrade is a city of our times, a city that was invented and planned in the course of the 20th century with a decisive modernist perspective. Soleil (sun), verdure (greenery), espace (space) and functional segregation together with the rules of CIAM were main arguments of New Belgrade. Now, 60 years later, how do we read New Belgrade and how do we want to continue its construction? We decided on a few very simple spatial tools, all of them in close discourse with the principles of modernism:

Firstly, we are opting for an elevated city detached from the ground. Only pillars and elements of circulation shall touch on the ground. We are proposing a floating city, buildings on pilotis leaving the entire ground free.

Secondly, the entire site is usable and accessible to everybody. Buildings do not block vision and movement. The terrain will be occupied by a multitude of different vegetations, exotic and local plants, waterlines, bike routes and jogging paths. The functional segregation of the modernist movement is replaced by the complexity of simultaneities. Below ground a slab accommodates parking and service functions. The ground level is covered by a variety of vegetations and allows for a city of pedestrians. 65% of the site is green and almost all of the ground level allows for free vision.