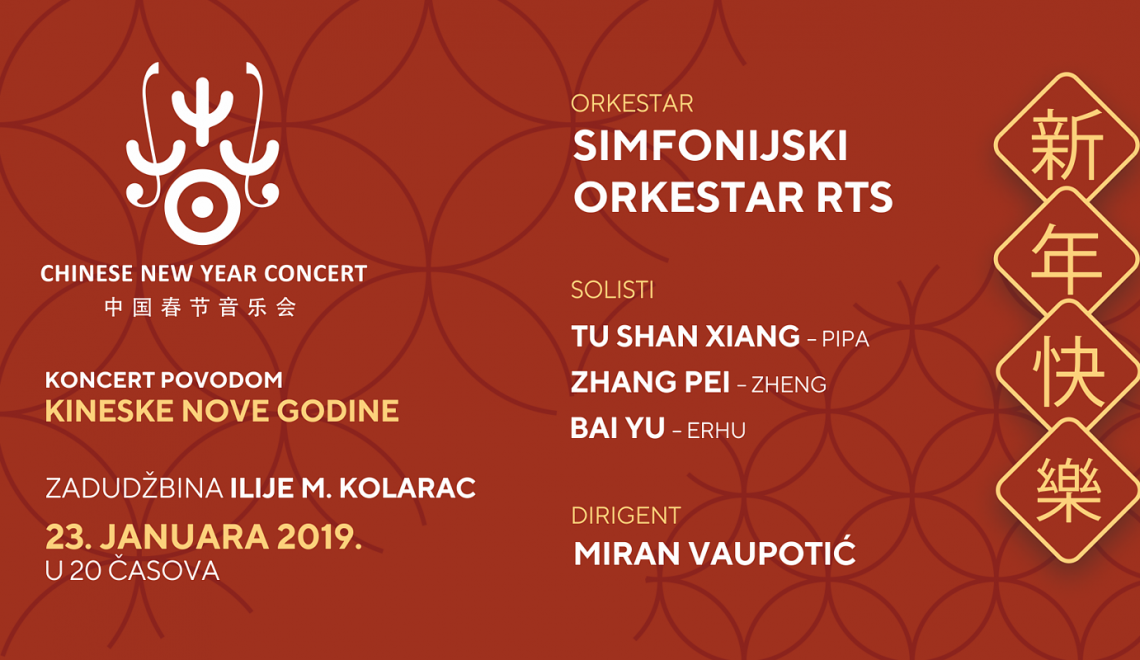 On Wednesday, January 23, at the Kolarac Endowment, starting at 8 pm, a concert will be held on the occasion of the Chinese New Year. The concert will be performed by three soloists from China, accompanied by the RTS Symphony Orchestra. Soloists will play on ancient Chinese instruments pipi, zeng and erhu, and the orchestra will be conducted by Croatian conductor Miran Vaupotić.

In addition to the famous works by Shostakovich, Tchaikovsky, Hatchaturian, the works of Chinese composers will be presented to the audience. Traditional New Year’s atmosphere will give performances of ballet pieces Krcko Orascic, Petar Ilic Tchaikovsky.

Three soloists from China will be presented to the Belgrade audience – Zhang Pei in the zeng, Tu Shanxiang on the pipa and Bai Ju on the eru. Conductor Miran Vaupotić will have the opportunity to conduct the first time with the RTS Symphony Orchestra. In his rich artistic career Vaupotić conducted prominent orchestras and opera ensembles across America, Asia, the Middle East and Europe, and only some of them are – the London Symphony Orchestra, the Maltese Philharmonic Orchestra, the National Orchestra of Argentina, the Zagreb Philharmonic Orchestra and others. Miran Vaupotić won the first prize at the 12th international competition of conductors Aram Hatchaturjan in Armenia, as well as the special prize “Haydn” for the best interpretation of the symphony by Josef Haydn.

I am glad that I will conduct the Radio Symphony Orchestra for the first time in Belgrade, I believe that we will achieve good cooperation, and it is always a special honor to participate in a project that develops intercultural relations and where we will merge the repertoire of Europe and our distant China. Through their brilliant soloists and very drunken, yet exotic music, we will approach this rich and ancient culture to the local audience – said conductor Miran Vaupotić.

The RTS Symphony Orchestra, which operates within the Music Production of RTS, is one of our most representative ensembles, founded back in 1937. On the very beginnings he had clearly profiled the artistic directions of action, aimed at affirmation and fostering of the national music heritage, as well as the capital works of world literature. Such program policy, founded by the first conductor, Mihailo Vukdragović, has been retained for more than seven decades of long performing practice, which was marked by the conductors-conductors Mladen Jagušt, Vančo Čavdarski and Bojan Suđić, who from 2005 till today his art director. Throughout history, cooperation with the orchestra has been accomplished by the most significant domestic and foreign artists, soloists and conductors. The RTS Symphony Orchestra is today a modern ensemble, which follows world trends in the interpretation of music.

The concert is organized in cooperation with the Chinese Culture Office of Hebei, and due to its exceptional importance, high delegates are expected, such as the Ambassador of China in Serbia. Tickets at the price of 300, 400 and 500 dinars can be purchased at the Kolarč Endowment.