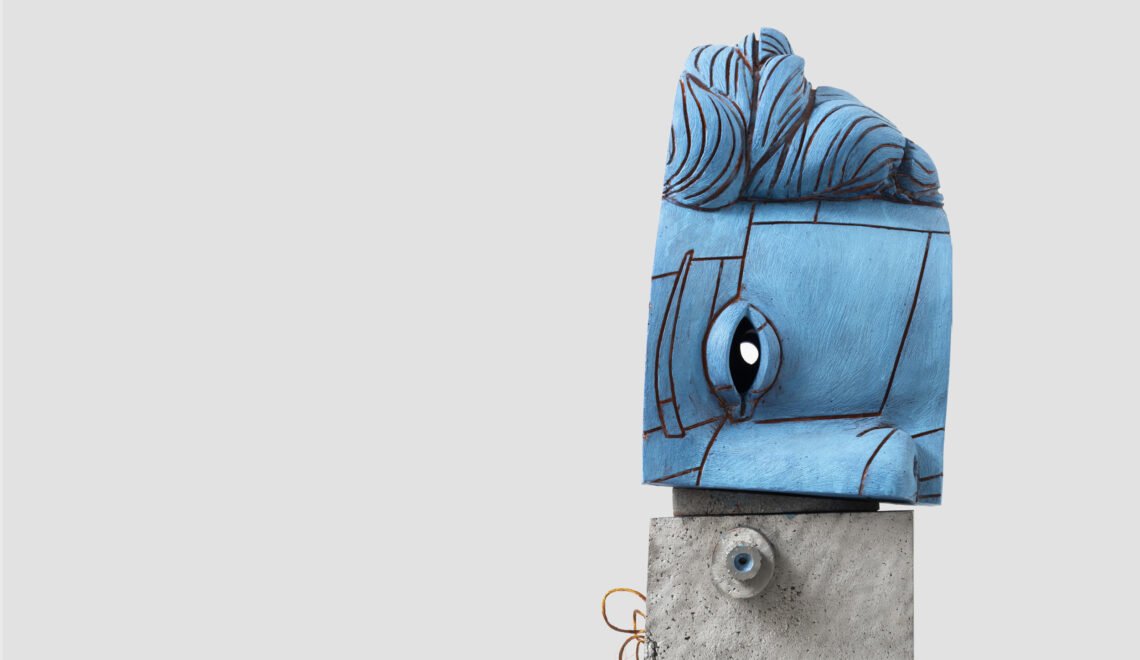 The exhibition “Unreliable Narrator” presents the decades-long creative work of  Mrdjan Bajic, one of the most prominent actors in the contemporary art scene in Serbia. Displayed on all five levels as well as in the immediate surroundings of the Museum, the exhibition is structured through chronological and thematic units (the 1980s vs 1990s, Yugomuzej, Unreliable Stories) that follow all stages of the development of  Bajic’s sculptural work and the evolution of his distinctive artistic poetics, approach, and expression in the medium of sculpture. The exhibition includes the artist’s now emblematic works and projects that have defined artistic events in our country, in the region, and internationally for the last four decades, including a new interpretation of the Yugomuzej project, as well as the work specially made for the current exhibition.

After Bajic’s initial research into the media potential of sculpture and of the relationship between idea-form-space during the 1980s, there followed a period of the author’s intensive study of the three-dimensionality of form and the expressive possibilities of materials, in which he began to introduce the architectural-constructive methodology, later defined by the term sculptotecture (Lidija Merenik), which until today remains crucial in the interpretations of his work and the procedures of further complexifying and elaborating sculptural units that often included multimedia expressions.

In addition to sculptural creations which are excellent examples of sculpture in an expanded field, the exhibition also includes an important and inseparable drawing oeuvre for Bajic as a part of the research processes and everyday thought practice.  For Bajic, a drawing or often a drawing-collage are conceptual starting points in testing final sculptural forms, an inexhaustible source of templates and sketches for completed or never realized works intended for exhibition and public spaces.

The exhibition units also provide insights into a wide range of subjects that the artist has dealt with, into perceptive and subtle critical reflections of the socio-historical, political, cultural contexts and narratives of local regions, firstly initiated by the immediate turbulent events in the last decade of the 20th century and then, by global civilizational phenomena that characterized his subject interests in the last decade and a half.

The individual exhibition segments dedicated to the collaborations with other artists, such as the British artist Richard Deacon, as well as the artist’s long-term involvement as a professor at the Faculty of Fine Arts and the education of generations of young artists, contribute significantly to the further understanding of Mrdjan Bajic’s oeuvre.

In cooperation with the Department of Art History of the Faculty of Philosophy of the University of Belgrade, the Faculty of Fine Arts, and the Serbian Academy of Sciences and Arts, art history students created a database of artists who studied under Professor Bajic and, in this way, created a kind of overview of the contemporary sculpture scene in Serbia in the last thirty years. As part of the exhibition, thematic guided tours, talks, and lectures are planned, at which local and foreign art historians, curators, and theorists will talk about the various aspects of Bajic’s artistic activity, but also about issues related to contemporary sculptural practices.

The promotion of the accompanying catalog of the exhibition with texts by Professor Lidija Merenik (Ph.D.), Professor Antonello Tolve (Ph.D.), and curators Zaklina Ratkovic and Miroslav Karic will be held on October 15, 2022.

Mrdjan Bajic (1957, Belgrade) graduated from the VIII Belgrade Gymnasium in 1976, after which he enrolled at the Faculty of Fine Arts (FLU) in Belgrade. He completed his graduate (1981) and postgraduate (1983) studies in the class of Professor Jovan Kratohvil at the Sculpture Department.
He was an assistant at the Sculpture Department of FLU from 1985 to 1990, when he moved to Paris, where he worked as a part of the Cité Internationale des Arts (1990-1992), Usine éphémère, Asnières (1992-1993), and the Pollock-Krasner Foundation Grant (1993- 1995). He returned to Belgrade at the end of 1996. He became a professor at FLU in 1997, where he has been teaching sculpture at the Sculpture Department ever since; starting in 2002 he has held a class for students of the final years of undergraduate and master’s studies at the same department. As a guest artist, he gave lectures at art academies and departments of art history and art theory in Richmond, Stockholm, Sydney, Budapest, San Francisco, Banja Luka, Karlsruhe, Berlin, New York, etc. In the period from 1998 to 2002, he worked on the “Yugomuzej” project, which was exhibited in Belgrade (Centre for Cultural Decontamination – CZKD, 2001), Vienna (Kunsthalle Wien project space, 2003), and at the 25th Biennial in Sao Paulo (2002).

He represented the Republic of Serbia at the Biennale in Venice in 2007 with the project “Reset_”.
In 2015 he was made a Knight of the Order of Arts and Letters by the Ministry of Culture and Communications of the Republic of France.
He was elected a corresponding member of the Serbian Academy of Sciences and Arts (SASA) in 2021.
He lives and works in Belgrade.