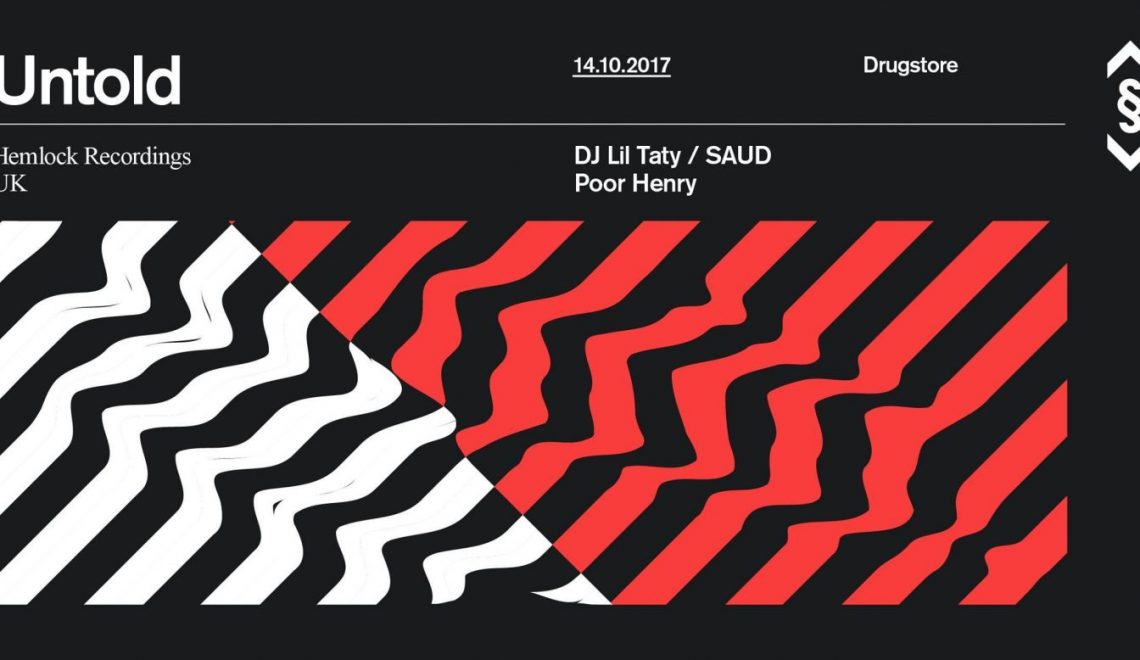 On 14th of October, Drugstore will host one of the most interesting techno producers of today – Untold. Local support will be provided by Poor Henry, Dj Lil Taty and SAUD. Untold said it loud and clear: “When I go to a club now I wanna be melted…I’m sick of conservative music within boundaries. I’m not hearing wild enough stuff, that’s what I wanna dance to! I’m trying to blow peoples minds.”

Based in Hertfordshire, on the London’s northern outskirts, Jack Dunning aka Untold may be the ultimate bass trickster. Always on the cutting edge of all things rhythm-and-bass, he was among the select few british producers that gave fresh glow to the tired dubstep genre by not pushing it forward as much as exploding it, bringing forth many mutations that ensued in the so-called “post-dubstep” era. After 15 years of experimenting with production since way back in the Jungle heyday and unlearning what the all too rigid bachelor programme in early electronic music (musique concrète, Stockhausen etc) had taught him, Untold started making waves back in 2008 with solo releases on indispensable dubstep labels such as Hessle audio and Hotflush. He opened Hemlock recordings the same year with a couple of his own releases and quickly, Hemlock acquired respect as one of the highly esteemed labels in what was starting to be labeled as “bass music”, having published challenging releases by Ramadanman, Cosmin TRG, Pangaea, Randomer and Untold himself, while also introducing James Blake to the world by releasing his first-ever EP ‘Air & Lack Thereof’!

Untold continued to impress with each new release, fusing oppressive low ends with discomforting sounds and adventurous beats that hinted at possible future trajectories of bass sound. Three-part EP Change In A Dynamic Environment in 2012 was a highly singular take on bass-infused techno, especially the massive “Motion the dance”, which put Untold firmly on the techno map, but also in a space beyond limits of any particular scene. His growing focus on technoid sounds made him start a new techno-focused label Pennyroyal, which released percussive belters by Guy Andrews, debutant J Tijn and Ben Sims & Paul Mac’s Fokus Group. But, always focused on the new, the fresh, yet unsaid, it didn’t take long before Untold took another turn – his debut album “Black light spiral” from 2014 didn’t quite sound like anything before. It was admittedly produced disregarding mixdown and production ‘rules’, which resulted in one of the most astounding electronic dance music albums of the decade, masterfully creating and preserving tension.

The following years saw Jack release an album of chaos theory inspired (and controlled!) sounds called “Echo in the Valley”, while also playing a guitar and using modular synthesizers in production of another jaw-dropping, pneumatic monster of a single “Doff / Phive”. He took a two year break from production since, only to appear recently reinventing his sound yet again – techno inversions and rhythmic convolutions of his latest “Tear Up The Club / Watton Res” EP marked a return of one of the most inventive dance music producers of the last decade.